There are 1 high school codes in Guinea today, according to the ACT. The full list is shown below by city, with name of each high school and the city where the school is located (based on the ACT official site). You can search a school code by pressing “Ctrl” + “F” and then type school name or 6-digit school code. 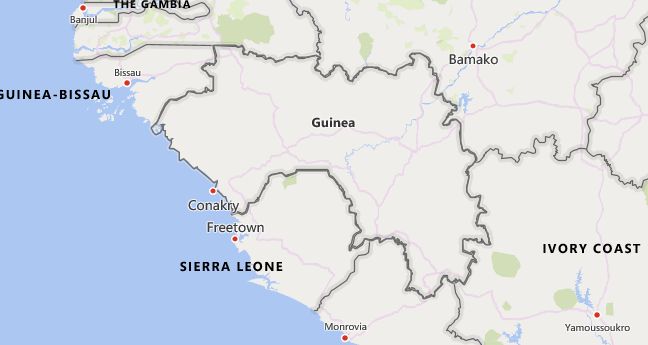 The above lists CEEB codes (College Entrance Examination Board) for all accredited Guinea high schools. Please be informed that the list of high school codes in Guinea may change throughout the year. If you can’t find codes for the high schools of your interest, please write to us or come back at a later time. We will update our database soon after a new high school code is added to the country of Guinea.

Since concrete approaches to democratization were still lacking, the World Bank, the EU and other organizations discontinued their financial aid in 2004. The country was economically on the verge of ruin. The severe economic crisis was exacerbated by the return of parts of the population who had once emigrated to the Ivory Coast and who are now returning to their homeland in view of the simmering civil war there. The immigration of Liberian civil war fighters led to tension and destabilization in the southeast. A failed attack on President Conté triggered a wave of arrests in the capital Conakry in January 2005. With a five-day general strike in March 2006, the unions forced wage increases for workers in state-owned companies. Renewed strikes and protests at the beginning of June 2006, in which students and unemployed young people also took part, escalated into serious clashes in which, according to official figures, eleven demonstrators were shot. Dissatisfaction with the Conté regime led again to a general strike in 2007 and to bloody conflicts between opposition demonstrators and the security forces. At times a state of emergency was imposed. Soldiers dissatisfied with their salaries rebelled against the government that same year.

Following mediation efforts by Burkina Faso, Jean-Marie Doré (* 1938) became the new Prime Minister on January 26, 2010 with the task of preparing elections. His cabinet was sworn in on February 26, 2010. On June 27, 2010, for the first time since independence from France in 1958, largely free presidential elections took place. None of the candidates was able to win an absolute majority in the first ballot, so that a run-off election between the UFDG candidate Cellou Dallein Diallo (* 1952) and Alpha Condé (* 1938), the leader of the RPG, was necessary. The runoff election on November 7, 2010 was Condé decide for themselves with 52.5% of the votes. The elections were overshadowed by bloody clashes between the political camps. After the runoff election, there were clashes between the disappointed supporters of Diallo and the security forces. At times a state of emergency was imposed. On December 21, 2010, Condé took over the presidency. He appointed Mohamed Said Fofana (* 1952) as the new Prime Minister on December 24, 2010. An armed attack on Condé was foiled by the security forces on July 19, 2011. The parliamentary elections, which had been postponed several times since the end of military rule in 2010, could not take place in 2012 either. The opposition threatened to boycott the election because it criticized manipulation of voter registration and did not see itself represented in the electoral commission. During protests by the opposition, v. a. repeated violent clashes in May and September 2012. Even a cabinet reshuffle at the beginning of October 2012 was unable to resolve domestic political tensions. Following renewed violent clashes, which killed at least 25 people, the UN-mediated government and opposition finally agreed to hold parliamentary elections in 2013. The election was won by the President’s RPG on September 28, 2013 Condé and the smaller parties allied with him. The opposition UFDG by Cellou Dallein Diallo did not recognize the result and claimed victory in the election. However, three weeks after the election, the Supreme Court upheld the victory of the RPG and its partners. The polls were preceded by a heated election campaign in which around 50 people had been killed since the spring. The newly elected parliament was constituted on January 13, 2014. At the end of 2013, the Ebola virus disease broke out in the rainforest of Guinea near the border with Liberia and Sierra Leone. The epidemic reached the capital Conakry in mid-March 2014. By October 2015, around 2,500 deaths were registered in Guinea. The epidemic severely impaired economic life. In December 2015, the WHO declared the country Ebola-free.