After the annexation of Crimea by the Russian Federation, Ukraine has been fighting since April 2014 against pro-Russian separatists and separatists supported by the Russian military in the Donec’k and Luhans’k areas (officially: Anti-Terrorist Operation, ATO). As early as March 2014, after the Euromaidan and the escape of Janukovyč, pro-Ukrainian and pro-Russian demonstrations took place in eastern Ukraine, which resulted in deaths and numerous injuries. At that time, voices were raised in favor of the federalization of Ukraine, mostly from the Party of Regions. At the end of March, pro-Russian demonstrators in Donec’k and Luhans’k called for a referendum on joining Russia, which was followed by occupations of the regional administrations, on which the Russian flags were hoisted. To find out about the situation in the east and south of the country, posted to Ukraine.

On April 7, 2014, the Donec’k People’s Republic was proclaimed by the self-appointed governor and former member of the neo-Nazi party “Russian National Unity”, Pavel Gubarev. Following this model, the People’s Republic of Luhans’k was proclaimed on April 27, 2014 with the self-proclaimed governor Valeri Bolotov. Both internationally unrecognized republics held referendums in May 2014 as legitimation and declared their wish to be accepted into the Russian Federation.

In response to the separatists ‘occupation of the cities of Slavjans’k, Kramators’k, Horlivka and Mariupol’ (which have since been liberated by the Ukrainian army), the Ukrainian government launched an anti-terrorist operation (ATO) on April 15, 2014. Since the beginning of the ATO, there have been increasing indications that Russia is supporting the separatists in the east with weapons and mercenaries. On February 20, 2018, the law on the reintegration of the occupied territories was signed by President Porošenko, according to which the ATO was renamed the “Operation of the United Forces”. 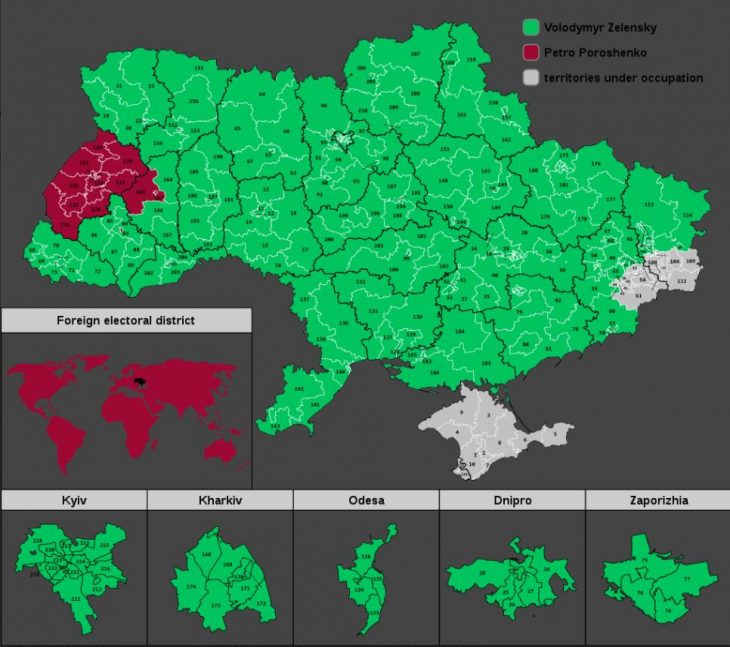 As the conflict escalated, more and more professional and heavier weapons were used. Several Ukrainian Army helicopters and planes were shot down. On July 17, 2014, the Malaysian Airlines MH17 passenger plane, which was taking off from Amsterdam for Kuala Lumpur, was shot down near the city of Tores in the Donec’k area. Much evidence indicates that pro-Russian rebels who owned the Buk surface-to-air missile systems accidentally shot down the plane. Pro-Russian terrorists obstructed the inspection of the accident site for several days by an OSCE delegation and the rescue work. The international investigations into the causes of the crash continue to the present. In response to the downing of the MH17, the EU and the US imposed the second stage of sanctions on Russia on July 22, 2014. In June 2019, the Dutch public prosecutor’s office issued arrest warrants against four men: against the Russian citizen Igor Girkin and three separatists, who have to stand trial for the murder of 298 cases and the downing of the MH17 plane. The process started on March 9, 2020.

In July and early August 2014, following the ceasefire proposed by President Porošenko, the ATO continued. At the beginning of August, after heavy fighting, the Ukrainian army succeeded in retaking numerous villages. In May 2018, the International Commission of Inquiry came to the conclusion that the aircraft had been shot down by the Russian Buk system.

According to franciscogardening, Ukraine is a country located in Eastern Europe. The war in eastern Ukraine claimed the lives of over 13,000 people, soldiers and civilians. As the UN reports, over 1.5 million people are on the run.

All international efforts to de-escalate the crisis in eastern Ukraine, such as the Geneva talks, multilateral talks and round tables in Ukraine, have remained unsuccessful up to the present. All previously agreed ceasefire agreements did not last long and have failed.

Official Russia until recently denied the presence of its military on Ukrainian territory and its involvement in the Ukraine conflict. According to all serious observers, Russia is waging an unexplained war against Ukraine, often referred to as ” hybrid “. Putin and his political environment repeatedly stage themselves as peacemakers by sending the so-called “aid convoy” from trucks to Ukraine. In August 2018, an OSCE observer mission drone filmed Russian trucks and weapon systems in the occupied territories.

After the arrest of Russian paratroopers who allegedly got lost on Ukrainian territory, the German government spoke of a military intervention by Russia for the first time on August 28, 2014. On August 31, 2014, Putin demanded negotiations on the statehood of “New Russia”, as the Russian leadership calls the south and east of Ukraine.

On September 5, 2014 was approved by the trilateral contact group (Ukraine, Russia and OSCE that) Minsk Protocol signed, which, among other things, a ceasefire provided for, but did not stop. The military conflict over Donetsk airport between the Ukrainian army units and the separatists, who were supported by the Russian side with weapons and personnel, began on September 28, 2014. 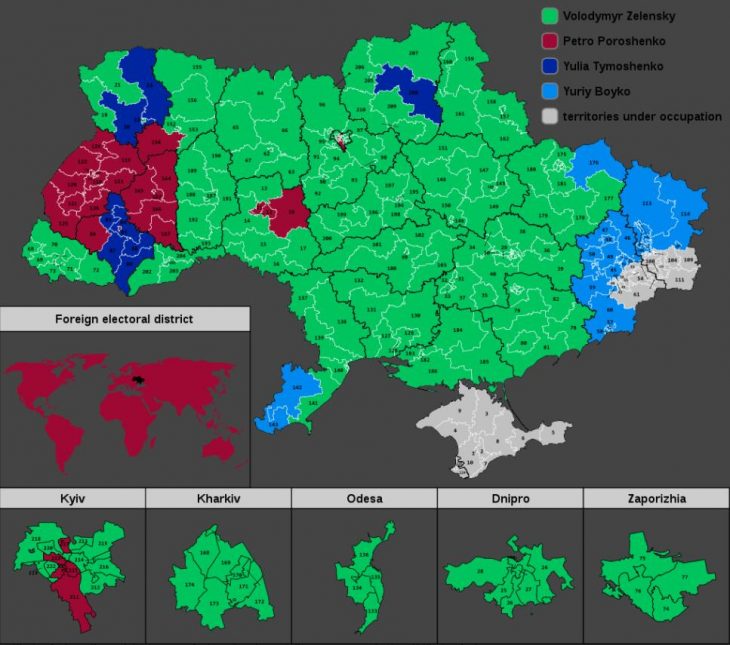 After the military situation had worsened, Chancellor Angela Merkel and the heads of government from France, Russia and Ukraine came to Minsk again on February 12, 2015 to put an end to the escalation of violence in the Donbas. The Minsk 2 agreements include a ceasefire, prisoner exchange, withdrawal of heavy weapons, establishment of a buffer zone, withdrawal of mercenaries, holding of local elections and recognition of the autonomy of the occupied territories, as well as the surveillance of the area by the OSCE.

In view of Russia’s involvement in the military conflict in eastern Ukraine, the Crimean annexion and the deliberate destabilization of an independent neighboring country, the EU has imposed restrictive economic sanctions on Russia. The EU continues to assess the implementation of the Minsk Agreement by Russia negatively and has extended the sanctions by a further six months until January 31, 2021. 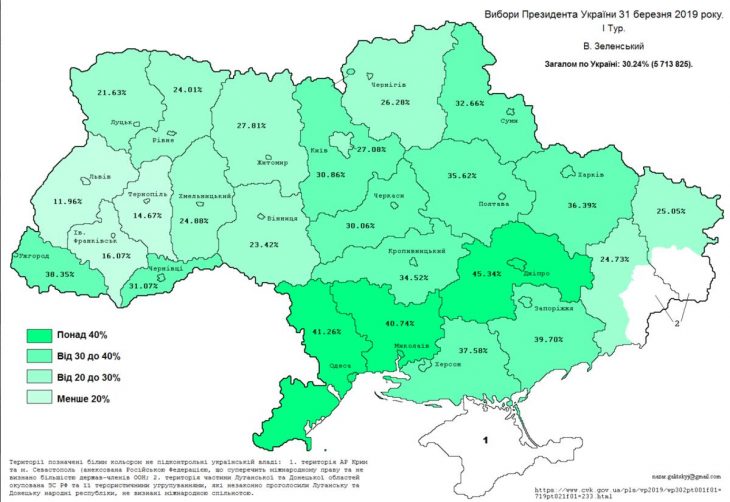 Results for Volodymyr Zelenskyj in the first ballot – Ukraine