The Virginia pharmacy schools were built for those who own a bachelor degree and want to pursue a four-year advanced degree of Doctor of Pharmacy (or PharmD) in Virginia. Please note that PCAT which stands for Pharmacy College Admissions Test is required for applicants for admissions to pharmacy schools, while Doctor of Pharmacy is a must for those who want to consider working as a pharmacist in Virginia.

This page lists all Virginia pharmacy colleges that are accredited by the ACPE – Accreditation Council for Pharmacy Education. Included are complete contact information and website addresses of all Pharmacy schools, colleges, and universities within the state of Virginia. 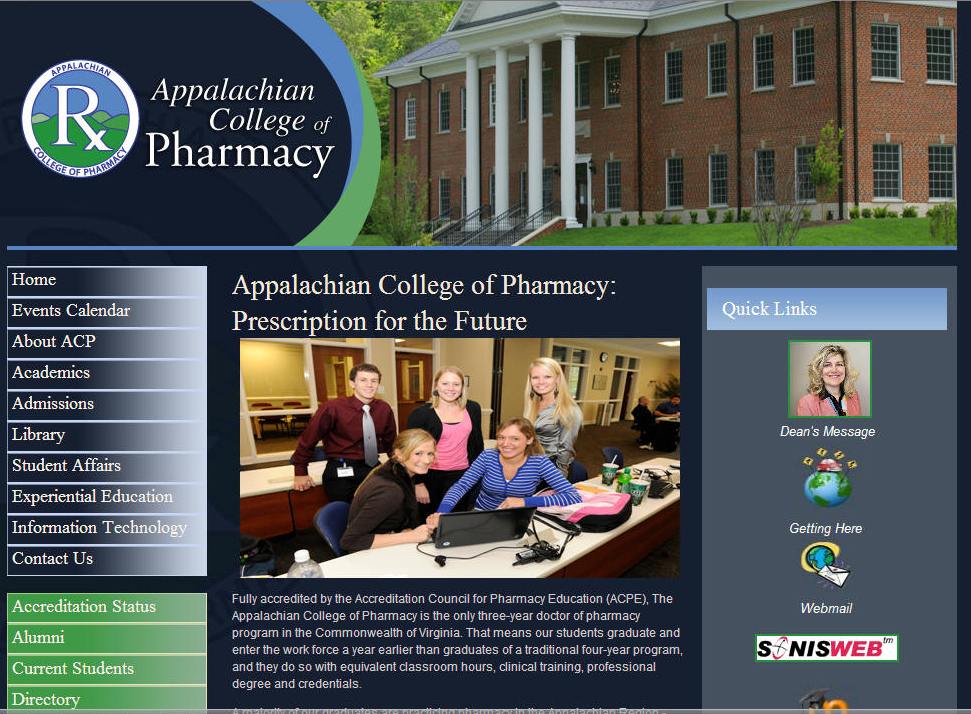 Virginia – a state in the east of the USA, one of the so-called South Atlantic states, is included in the southern region of the USA. 10th state within the state. The population is 7.2 million people (12th place in the USA; data from 2000). The capital is Richmond, the largest city is Virginia Beach, other large cities are Alexandria, Lynchburg, Norfolk, Newport News, Portsmouth, Hampton, Chesapeake.

The full official name of the state is the Commonwealth of Virginia.

The eastern part of the state is heavily swamped. The western part is located on the threshold of the Appalachian Mountains, the system of which includes the Cumberland Plateau and the Blue Ridge. The most significant rivers in the state are the Potomac, Rappahannock, Shenandoah, and Roanoke. More than 60% of the state is covered with forests. The climate is temperate, humid, with hot summers and mild winters.

Traditionally, the Indian tribes Cherokee, Chicahomini, Meherrins, Monks, Pamunks, etc. lived on the territory of present-day Virginia. They belonged to three large ethnic groups, the largest of which was the Algonquian, the other two – the Iroquois and the Sioux.

At the end of the 16th century (1587), when England began to colonize North America, the province was named Virginia (“Virgin”) in honor of Queen Elizabeth I, who never married. At the beginning of the 17th century, the London Virginia Company was established here, which financed Jamestown (the original capital of the province) and other English settlements.

In 1780, during the Revolutionary War, the capital was moved to Richmond. June 25, 1788 Virginia became the tenth and largest of the original thirteen US states. After the war, Virginia was for a long time the main political center of the country: it was from here that the authors of the constitution, as well as eight presidents and other prominent politicians, came from.

The development of industry, which began in the 1840s, was frozen by the Civil War, but gained momentum again in the 20th century. In April 1861, Virginia officially joined the Confederacy. In 1863, the western part (now the state of West Virginia) separated from it. During the war, Virginia became the main arena of battles – the battles of Bull Run, Petersburg, Fredericksburg and others took place here. On April 9, 1865, in the village of Appomatox, General Robert E. Lee signed the act of surrender.

During the post-war Reconstruction, Virginia was officially re-admitted to the United States in 1870.

The most important types of minerals are coal, stone, sand, which are mined mainly in the Appalachian region; there are small reserves of oil and gas. The public sector is the leading source of income for Virginians, with many of the state’s residents employed by federal agencies in Washington or affiliated with the military. The state has large military and naval bases.

The main role in the state’s economy is played by the tobacco, chemical, rubber, food and engineering industries. Woodworking and furniture production, as well as tourism and the service sector are developed.

The main agricultural crops of the state are tobacco, corn, soybeans, apples. More than half of the value of marketable agricultural products is accounted for by animal husbandry, primarily the breeding of cattle and sheep. Poultry farming is developed (Rockingham County is one of the main US centers for the production of turkey meat), fishing and sea products (herring, crabs, oysters).

There is a powerful transport infrastructure, including a network of highways and railways. Hampton Roads is one of the main ports in the country. The state has airports serving the city of Washington (Dulles Airport and National Airport).

There are more than fifty universities and colleges in the state.