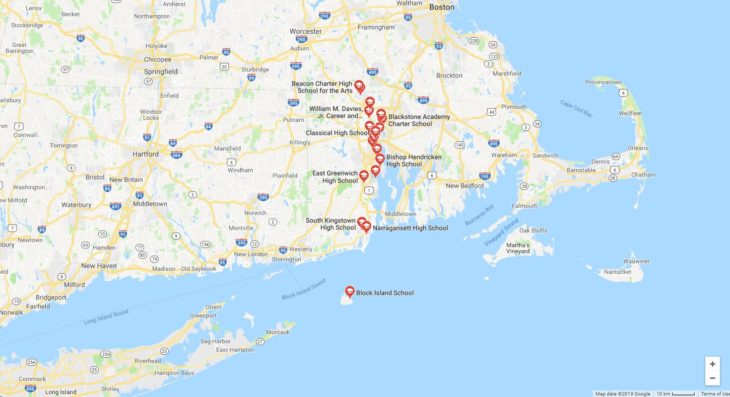 Eastern Rhode Island is part of the Atlantic Lowlands, while the west of the state is forested hilly uplands. More than thirty islands are located in Narragansett Bay and off the ocean coast to the west. Due to the very large length of the coastline, Rhode Island received its official nickname – “Ocean State”.

Rhode Island has a humid continental climate with warm summers and cool winters, with precipitation fairly evenly distributed throughout the year.

The first European to see Narragansett Bay was the Italian Giovanni da Verrazano in 1524. In 1611–1614, the coast of present-day Rhode Island (as well as Massachusetts, Connecticut, New York, and New Jersey) was explored by Dutch captain Adrian Block. It was he who named the lands of Rhode Island Roodt Eylandt, which means “red island” (obviously because of the red clay soils of the coast). Later, after immigrants from England settled on the territory of Rhode Island, its name was anglicized.

The first European settlement in Rhode Island was established in 1636 by the Protestant theologian Roger Williams, who was expelled from the Massachusetts Bay Colony due to religious differences. The colony founded by Williams was named Providence Plantations. In 1638, another group of religious dissidents from Massachusetts, under the leadership of Anne Hutchinson, founded the city of Portsmouth and the “Rhode Island Colony”. Four years later, the settlers united to form the Rhode Island Colony and Providence Plantations.

During the American Revolution, Rhode Island became the first colony to declare independence from England (in May 1776, two months before the adoption of the US Declaration of Independence). During the years of the Revolutionary War, several battles took place on the territory of the state. In 1790, Rhode Island and Providence Plantations (as was the official name) became the thirteenth state of the United States.

In 2020, Rhode Island legislators passed a decision (supported in a referendum by the residents of the state) to rename: “The State of Rhode Island and Providence Plantations” became the “State of Rhode Island”. This decision was caused by the negative connotations of the word “plantation” in the name, which evoked associations with the use of slave labor.

The largest city in the “Smallest State” is its capital, Providence. About 180,000 people live here.

The economy of the “Ocean State” is quite diverse, finance and insurance, industry, education, medicine, services, agriculture, tourism and other industries are well developed here.