Your search has generated 12 top-ranked education schools in New York. These colleges offer graduate study in field of education, leading to an Master degree. Check out the following table to see a list of major educational schools in the state of New York, each with enrollment statistics, tuition fees and contact information. 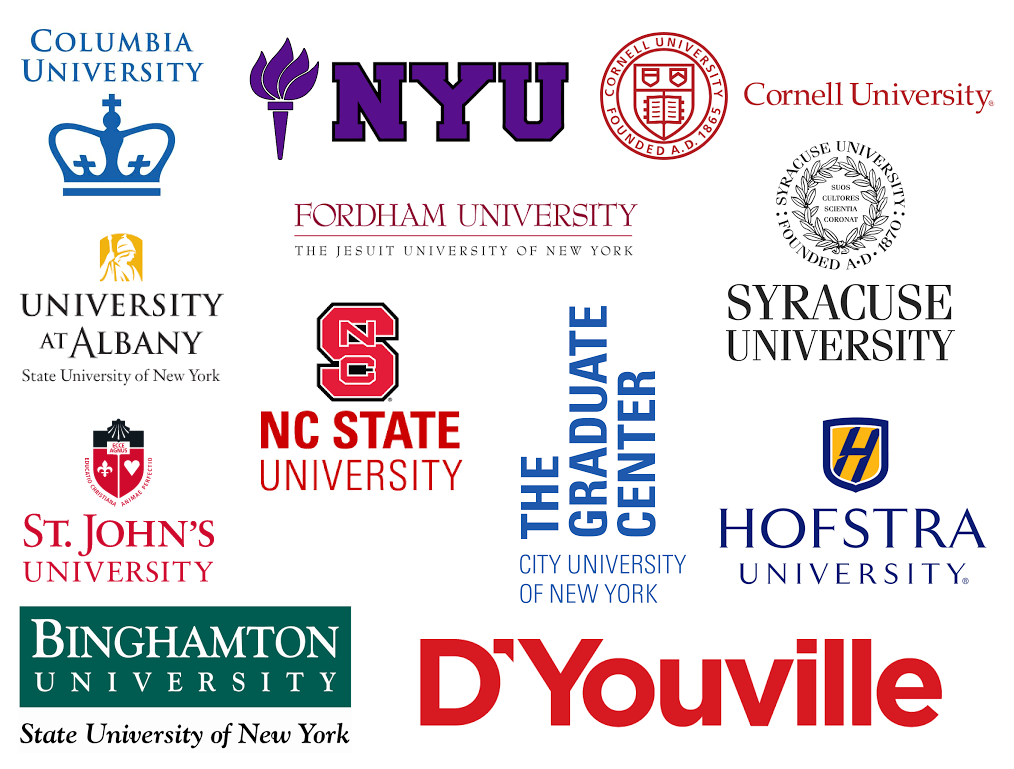 History of the State of New York

People have lived in what is now New York State for more than ten thousand years. In the 16th century, when the first Europeans arrived here, the Iroquois tribes lived in the northern and western regions of New York (from the Hudson River to the Great Lakes). Five of them (Cayugas, Mohawks, Oneida, Onondaga and Seneca) formed an alliance known as the Iroquois League, later the Tuscarora Indians, who fled under pressure from Europeans from North Carolina and Virginia, were also accepted into this alliance. In the south of New York also lived non-League Iroquois of the Susquehannock people.

The Algonquian tribes lived in the southeast (the Delaware or Lenny-Lenape, Mohicans and others), it was from their language that many geographical names familiar to us came, including “Manhattan”. The Iroquois and the Algonquian peoples were at enmity with each other.

The main occupations of the Indians were hunting, fishing and agriculture. They grew corn, beans and squash, calling these crops the “three sisters”.

The first European explorer who saw the land of New York was in 1524 the Italian Giovanni da Verrazano (Verrazzano). Being in the service of the French king, he sailed along the coast of America from North Carolina to Rhode Island. In New York Bay, Verrazano met with the Lenny-Lenape Indians, and he mistook the mouth of the Hudson River for a large lake. In honor of the famous pioneer, several bridges in the East of the USA are named: in Rhode Island, Maryland and New York City(connecting Brooklyn and Staten Island).

In 1609, the northern lands of New York were explored by the Frenchman Samuel de Champlain, it was in his honor that Lake Champlain, located on the border of the USA and Canada (as well as the states of New York and Vermont), was named.

In the same year, 1609, the English captain Henry Hudson (Hudson) went up the river, later named after him. He was looking for a sea route from the Atlantic to the Pacific for the Dutch East India Company, but instead laid the foundation for the colonization of New York with his explorations.

From 1611 to 1614, the coast of New Jersey, New York, Connecticut, Rhode Island and Massachusetts was explored by the Dutchman Adrian Block. It was he who compiled the first sufficiently detailed map of the region, on which the name of the colony “New Netherland” (or “New Holland”) first appeared.

In 1614, Fort Nassau, the first Dutch settlement in America, was built on the site of the modern capital of the state of New York, Albany . Four years later, the fort was destroyed by floods and abandoned, but already in 1624 a new one was built nearby, called Orange.

In 1625, Fort Amsterdam was built on the island of Manhattan bought from the Indians, around which the largest city in New Holland, New Amsterdam (New Amsterdam), grew.

The main occupations of the residents of New Netherland were buying furs from the Indians, logging and agriculture. In order to encourage the settlement of new lands, the Dutch West India Company, which led the colony, introduced a system of “patronage” (from the Dutch patroon, owner or leader). In fact, anyone could take possession of a piece of land and become a “patron” on it, a kind of feudal landowner, with the right to create courts and appoint officials. At the same time, the patron was obliged to establish a settlement of at least fifty families in four years. Tenants of patrons were exempted for ten years from paying taxes to the state, paying only quitrent to their patron in money or food.

The patronage system allowed the Dutch to quickly develop New York lands and develop agriculture on them, making New Netherland a major exporter of wheat and tobacco. It remained relevant even after the Dutch lost control of the colony. A kind of aristocracy appeared among the patrons, such as the van Renseleer family, who owned an estate near Albany and remained one of the richest in the United States for a century and a half.

On August 27, 1664, English warships under the command of Richard Nichols entered the harbor of New Amsterdam and captured the city almost without resistance. The city and colony were renamed New York in honor of the new owner, the younger brother of King Charles II of England, James, Duke of York and Albany. Richard Nichols became the first governor of the colony, which then included the lands of the present-day states of New York, New Jersey, Delaware, and Vermont, as well as parts of Connecticut, Massachusetts, Maine, and Pennsylvania. In subsequent decades, the territory of the New York colony was significantly reduced due to the formation of new provinces, but territorial disputes with “neighbors” continued until the sixties of the 18th century.

In July 1673, the Dutch recaptured New York, but a year later, in 1674, England regained control of the colony.

The British continued the Dutch policy of religious freedom in the colony and alliance with the Iroquois tribes against the French colonies in the north. In 1683, a constitution was adopted in New York by the colonial assembly, which gave New York considerable independence from the metropolis. But already in 1685, James, who became the king of England, canceled this constitution. In 1688, New York became part of the Dominion of New England, which united all the British colonies in North America. In the same year, after the overthrow of James II from the English throne, an uprising broke out in New York under the leadership of Jacob Leisler (Leisler). Royal power in New York was not restored until 1691.

In the 18th century, the province of New York grew and developed. The main occupations of the colonists remained agriculture (mainly in the Hudson River Valley and Long Island) and logging. The population of the colony grew from 18,000 in 1698 to 168,000 in 1771, with more black slaves in New York than anywhere north of the Mason-Dixon Line (up to 16% of the population in 1720).

For decades, New York was at the center of conflict between the British and French colonies in North America, known as the “French and Indian Wars”. This conflict complicated the westward expansion of the province towards the Great Lakes.

During the years of the struggle for US independence, New Yorkers actively participated in the patriotic movement “Sons of Liberty”, and provincial delegates worked in the Continental Congress (although there was serious opposition among the leading politicians of New York at that time to the struggle for separation from England).

New York Province hosted several major battles of the American Revolutionary War, including the Battle of Long Island on August 27, 1776, and the Battle of Saratoga in October 1777, which is considered the turning point of the war.

On November 25, 1783, after the signing of the Treaty of Paris and the recognition of the sovereignty of the young state, the last British soldiers who were in the United States left Manhattan in New York. This event went down in the history of the United States of America as “Evacuation Day”.

After gaining independence, the population of New York was divided into “Federalists”, who supported a strong national government (they included the majority of New York City residents, and their leader was Alexander Hamilton, the future US Secretary of the Treasury in the government of George Washington) and “anti-Federalists”, who advocated greater independence of the states (mainly the population of agricultural areas in the north and west of New York). Only on July 26, 1788, New York ratified the Constitution of the United States of America, becoming the eleventh of the US states. The cities of Kingston, Poughkeepsie and New York were briefly the capital of the state of New York, until Albany became the capital in 1797.

In 1785, the city of New York became the capital of the United States and remained so for five years. The US Congress worked in the building known as Federal Hall on Wall Street, it was here that the inauguration of the first US President George Washington took place in 1789. The Bill of Rights, the first ten amendments to the US Constitution, was also adopted here.