The TOEFL iBT test is offered in the state of Texas. The list below shows testing locations for computer based TOEFL exam. Please scroll down to find the most up-to-date list of available test centers (including addresses) in Texas. 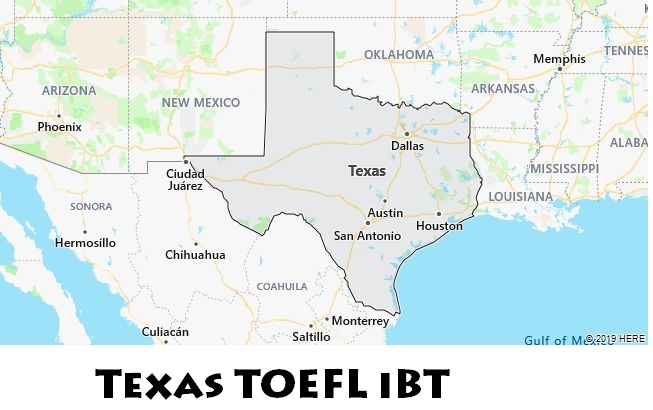 The first European settlement on the lands of Texas appeared in 1682, when the Spaniards, who fled from the Pueblo Indians who had rebelled in New Mexico, settled in the area of ​​the modern city of El Paso in the west of the state. In 1685, members of a French expedition led by René de La Salle landed on the Texas coast looking for the mouth of the Mississippi River., but due to inaccurate maps and navigational errors, they moored much to the west. The French built Fort St. Louis, but two years later René de La Salle abandoned it with several companions. Soon the residents remaining in the fort were killed, and its buildings were destroyed by the Indians. Concerned about the emergence of French rivals, the Spaniards began to pay more attention to the development of the region and already in 1690 the first Spanish settlement in East Texas was founded – the Catholic mission of San Francisco de los Teyas in the area of ​​the modern city of San Antonio.

In the first half of the 18th century, the confrontation between the Spaniards (whose colony of New Spain was located to the west) and the French (whose Louisiana was located to the east) continued in Texas. Missions, forts and fortresses were built, armed clashes took place (including with the Indians). In 1762, France ceded to Spain the lands of the Louisiana colony, located west of the Mississippi River; in the eighties, the Spaniards managed to make peace with some and suppress the resistance of other Indian peoples. In the nineties of the XVIII century, the first American hunters and traders appeared in Texas. In 1803, after the purchase of Louisiana, the United States presented its claims to the lands of Texas, only in 1819 the United States agreed to recognize Texas as Spanish in exchange for Florida.

In 1821, Mexico became independent, and Texas became part of this young state. In 1825, with the permission of the Mexican government, the first large group of colonists from the United States moved to Texas under the leadership of Stephen Austin. In the following years, immigration from the United States continued, and it soon became popular among the settlers to seek secession from Mexico. In 1835, armed clashes took place between Texas settlers and Mexican army units, which escalated into the Texas War of Independence (one of the most famous episodes of which was the “Battle of the Alamo”). On March 2, 1836, the Texas Declaration of Independence was adopted, which established the sovereign Republic of Texas. The military victories of the Army of Texas under the leadership of General Sam Houston led to the signing of a treaty in May of that year,

Since independence, Texas has had both independence supporters and supporters of unification with the United States. Be that as it may, already in 1837 a request was made for the first time to admit the republic to the Union, but due to fear of aggravating relations with Mexico, this proposal was rejected by the US government. Nevertheless, over the next few years, it became clear that the young republic was unable to independently resist the external threat (from Mexico) or ensure its economic independence. Public opinion has also changed in the United States, where the number of supporters of the adoption of Texas has grown significantly. As a result, in February 1845 Congress allowed the United States to annex Texas, the Constitution of the “Lone Star State” was adopted in the autumn, and on December 29, 1845, Texas became the twenty-eighth state of the United States.

The most important for the Texas economy are mining (primarily oil and gas), agriculture and industry. Texas ranks first in the United States in terms of oil production; explored reserves here account for about a quarter of those in the country. Accordingly, the most developed industrial sector is the petrochemical industry, in the state (mainly on the coast of the Gulf of Mexico) there are a number of large oil refineries. In addition, Texas industrial plants assemble aircraft and automobiles; produce a variety of electronics and household appliances; sew clothes and process food. The state’s farms raise cattle (mainly for meat) and sheep, grow cotton, rice, sorghum, peanuts and other crops.