The TOEFL iBT test is offered in the state of North Dakota. The list below shows testing locations for computer based TOEFL exam. Please scroll down to find the most up-to-date list of available test centers (including addresses) in North Dakota. 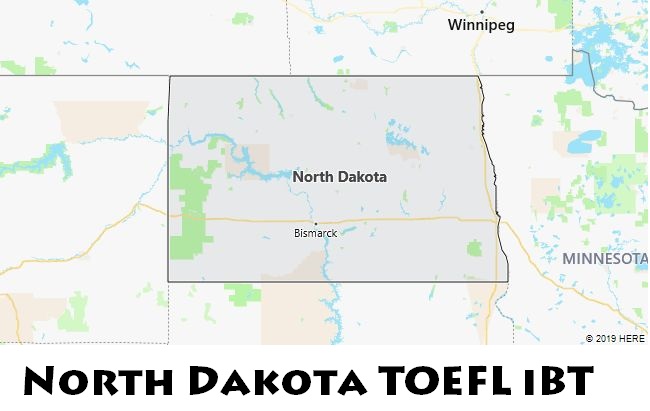 Short for ND, North Dakota was admitted to United States on 11/02/1889. The capital city is Bismarck. With an area of 183,112 km², North Dakota has a population of 757,952. The population density is 4.14 people per km². According to ALLCITYCODES, North Dakota has 1 area codes: 701. If you need to call your testing center, please be sure to add such an area code before phone number you are given.

The economy of North Dakota is based on agriculture, mining (primarily oil), and, to a much lesser extent, industry and tourism.

Despite the fact that the state has a very low unemployment rate, and the cities of Bismarck and Fargo were included by Forbes magazine in the list of “best places for business and career”, a serious problem for the economy is the constant outflow of qualified specialists (mainly young people with higher education), in mostly leaving for the industrial centers of US metropolitan areas.

In recent years, large IT companies have opened their divisions in North Dakota, for example, the Microsoft campus is located in Fargo.

North Dakota occupies one of the first places in terms of agricultural production in the United States of America. The fertile land (especially in the east) and the temperate climate of North Dakota are great for growing grains. The state provides a significant part of the nationwide production of wheat (especially durum varieties), barley, buckwheat, oats, and corn.

Animal husbandry is also well developed; cattle (both for meat and milk) and pigs are successfully bred here. North Dakota is one of the largest honey producers in the US.

North Dakota’s industry is primarily the processing of food grown by the state’s farmers. For example, located in the city of Grand Forks (and the only state-owned in the country) flour mill with an elevator is the largest in the United States. Also, food industry enterprises produce vegetable oils, cheeses and other dairy products, sugar, frozen semi-finished products.

In addition, the plants and factories of the state produce construction and agricultural machinery, wind turbines, parts and assemblies of light aircraft, and other industrial products.

Several major military installations are located in the state, including the air bases at Grand Forks and Minot, as well as one of the stations of the ballistic missile early warning system in Cavalier.

Oil fields in North Dakota were discovered in the middle of the 20th century, but for a long time they were considered unprofitable, and only in recent years, thanks to the emergence of new technologies, the state is experiencing a real “oil boom”. North Dakota has rapidly become one of the leaders in oil production in the US, and drilling of new wells continues, providing jobs and investment.

North Dakota doesn’t have many tourist attractions, but at least two of them attract numerous tourists. This is Theodore Roosevelt National Park (in the “bad lands” in the southwest of the state), known for its picturesque landscapes, and located on the border with the Canadian province of Manitoba, the International Garden of Peace park.