The TOEFL iBT test is offered in the state of Montana. The list below shows testing locations for computer based TOEFL exam. Please scroll down to find the most up-to-date list of available test centers (including addresses) in Montana. 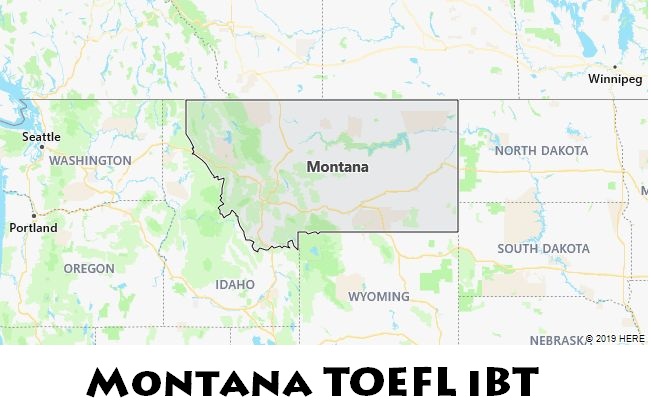 Short for MT, Montana was admitted to United States on 11/08/1889. The capital city is Helena. With an area of 380,838 km², Montana has a population of 1,042,520. The population density is 2.74 people per km². According to ALLCITYCODES, Montana has 1 area codes: 406. If you need to call your testing center, please be sure to add such an area code before phone number you are given.

In the late XIX – early XX century, the economy of Montana developed rapidly, which was facilitated by the railroads built in the state in the eighties of the XIX century. Copper became the main source of Montana’s wealth in the last decades of the century before last. The city of Butte was called “the richest hill on Earth”, and the Anaconda copper mine located next to it was the largest in the world.

The history of the state included financial and political “wars” striving for monopoly control over the industry of “copper kings”, the most famous of which were William Clark, Marcus Daly and Fritz Heinze. William Clark became infamous when his attempt to become a U.S. senator became known by bribing state legislators. It was about him that Mark Twain wrote: “… he is a disgrace to the American nation…”

In the 1980s and 1990s, a labor movement was born in the mines of Montana, which later grew into the creation of powerful trade unions.

In 1889, Montana became the forty-first state of the United States.

In addition to the mining industry, which was undoubtedly the leading industry in Montana, agriculture was actively developing in the state. Back in the sixties of the XIX century, the first herds of cattle were driven to Montana from Texas, and later numerous cattle ranches appeared in the state. At the beginning of the 20th century, oats and wheat began to be sown on the lands of Montana. The sharp increase in demand for grain during the First World War and generous harvests in the virgin lands were very promising, but already in 1917-19, severe droughts and dust storms destroyed many farms.

During the years of the Great Depression, several major hydrotechnical projects were carried out in Montana, and new lands suitable for agriculture appeared in the state.

During the Second World War, the demand for copper greatly increased, in the fifties of the last century oil began to be produced in Montana, in the seventies coal consumption increased in the United States. In recent decades, the role of the mining industry in Montana has been steadily declining. Many “mining” cities (such as Butte), once rich and prosperous, fall into decay.

The state’s economy is increasingly reoriented to the service sector, high-tech production and development. The importance of tourism is growing; every year, millions of tourists come to Montana, famous for its picturesque nature.