The TOEFL iBT test is offered in the state of Indiana. The list below shows testing locations for computer based TOEFL exam. Please scroll down to find the most up-to-date list of available test centers (including addresses) in Indiana. 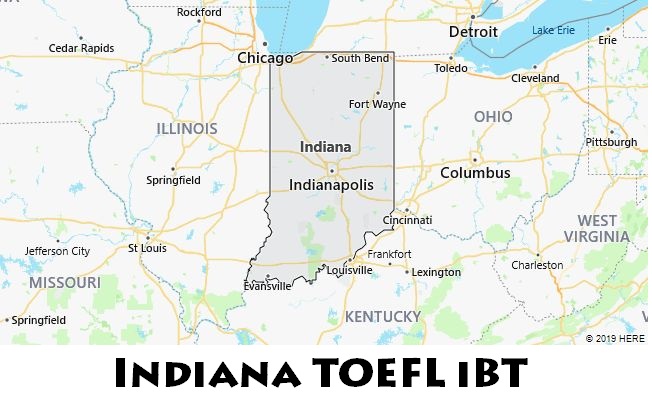 Indiana is bordered by the states of Michigan to the north, Ohio to the east, Kentucky to the south (border along the Ohio River), and Illinois to the west.

The state of Indiana lives according to the time of two US time zones, most of the state belongs to the eastern time zone, and several western counties belong to the central one.

Although Indiana does not have large elevation changes, various types of terrain can be seen here – from the flats in the north of the state to the hilly and ravine-indented terrain in the southern counties.

North Indiana is an almost flat lowland that stretches along the shores of Lake Michigan, one of the Great Lakes of the United States. There are two nature reserves on the sandy coast of Indiana, one national (Indiana Dunes National Lakeshore) and one established by the state government (Indiana Dunes State Park).

Further south, in the central regions of the state, the plain becomes more hilly. It is here, not far from the border with Ohio, that the highest point of Indiana is located – Hoosier Hill (383 meters above sea level).

In southern Indiana, the terrain becomes higher and more indented, with numerous forested hills, ravines, and streams. Several large karst caves are also located here, the most famous of which are Wyandotte, Marengo and Squire Boone’s Cave. The picturesque Hoosier National Forest is very popular with hikers.