The TOEFL iBT test is offered in the state of Delaware. The list below shows testing locations for computer based TOEFL exam. Please scroll down to find the most up-to-date list of available test centers (including addresses) in Delaware. 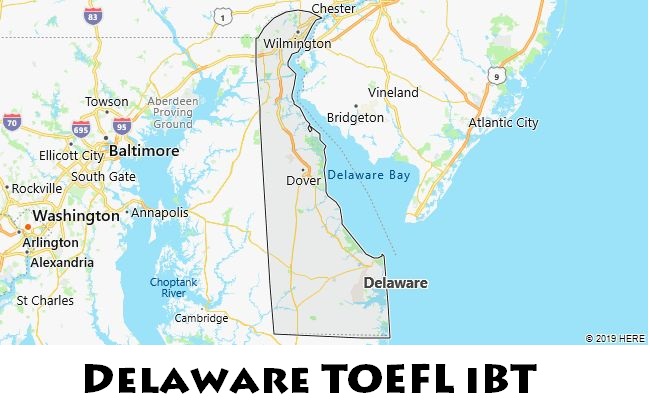 Short for DE, Delaware was admitted to United States on 12/07/1787. The capital city is Dover. With an area of 6,447 km², Delaware has a population of 952.065. The population density is 147.68 people per km². According to ALLCITYCODES, Delaware has 1 area codes: 302. If you need to call your testing center, please be sure to add such an area code before phone number you are given.

Delaware is bordered by the states of Maryland to the south and west, Pennsylvania to the north, and New Jersey to the northeast. In the east, the coast of the state is washed by the waters of the Atlantic Ocean.

Delaware is part of the United States Eastern Time Zone.

Most of Delaware is located in the eastern part of the Delmarva Peninsula and is part of the US Atlantic Lowlands. This is an almost flat plain, only in the north of the state turning into the hilly foothills of the Appalachian mountain system. Delaware is the “lowest” of all American states, with an average height of only 18 meters. A chain of low (up to 25 meters) hills stretching along the western border of Delaware is the watershed of the rivers of the peninsula.

In the south of the state, in addition to the sandy beaches of the coast, a large area is occupied by wetlands and mixed (mainly different types of pine and oak, as well as swamp cypresses) forests.

The gentle hills of the northern regions of Delaware are covered with deciduous (mostly oak) and mixed forests, characteristic of the northeast coast of the United States. On the border with Pennsylvania, a narrow (up to fifteen kilometers wide) strip stretches the eastern slopes of the Piedmont Plateau, it is here that the highest point of the state (137 meters above sea level) is located.

Delaware Bay, where the fresh water of the river of the same name mixes with the salty waters of the Atlantic, serves as a traditional stopover for hundreds of thousands of migratory birds. Several nature reserves have been created here, the most famous of which is the Bombay Hook National Wildlife Refuge.

Delaware has a humid subtropical climate, the main determining factor being its proximity to the Atlantic Ocean. It has very hot summers and mild winters, snow rarely falls and melts quickly.

The average temperature of the coldest month in the state’s largest city in northern Delaware, Wilmington, ranges from -4°C to 5°C, while the hottest month ranges from 19°C to 30°C. In Dover, Delaware’s capital, temperatures typically range from -3°C to 7°C in January, and between 20°C and 31°C in July. In the south of the state, in Seaford, in winter it is usually -4°C to 7°C, and in summer from 18°C ​​to 31°C.

Delaware, like other states on the Atlantic coast of the United States of America, is prone to being hit by hurricanes.