The 2007 Elections: On the Brink of Civil War 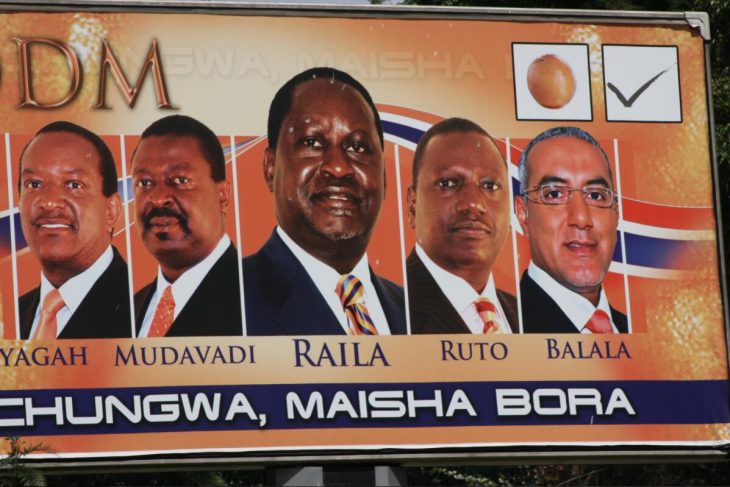 In 2006, the former unity party KANU saw itself as a leading force in the opposition alliance ‘Orange Democratic Movement’ (ODM). For a time even a party dissolution in favor of the ODM was under discussion. In September 2007, party leader Uhuru Kenyatta announced (probably with the approval of former President Moi) that he would support Kibaki’s election for a second term. Kibaki stood as a candidate for his party of National Unity (PNU), which he founded in autumn 2007. There was tension even before the elections on December 27, 2007.

On the part of the ODM, the aspirations for the presidency led to a final rift between the party leaders Raila Odinga, a Luo, and the Kamba Kalonzo Musyoka. The ODM electoral victory, which was believed to be certain, was thwarted not least by the departure of KANU and the split into Odinga’s ODM and Musyoka’s ODM-Kenya.

The situation was chaotic as early as election day. When the votes were counted, it became increasingly clear that the election had been falsified. The investigative commission, headed by the South African judge Kriegler, found out later that both sides had probably manipulated, but that the elections had been invalid anyway because there were a million dead in the electoral register and more than a million young voters had not been registered.

The noticeable delays in the counting of votes led to initial protests by supporters of the opposition. After the announcement of the election of Kibaki by the apparently intimidated head of the electoral commission, Samuel Kivuitu, opposition politicians announced that they would proclaim Odinga as counter-president. Odinga himself spoke of a “civil coup” after Kibaki had himself sworn in in a hurry and without any protocol honors. His angry supporters chanted “No Raila, no peace”.

Violence and counter-violence escalated – the renowned Kenyan documentary filmmaker Hilary N’gweno traced the slide into the catastrophe, but private individuals and the Red Cross also posted pictures that can still be viewed on YouTube today. While the police in Nairobi bludgeoned alleged opposition supporters, the mob began to hunt down members of the Kikuyu ethnic group and other groups believed to be Kibaki’s supporters in the Rift Valley and Nyanza Province. “Riot in Kenya” and “Now everything is sinking in the blood” was the headline in Spiegel magazine in early January. The death toll rose into the hundreds and that of the displaced within the country into the hundreds of thousands. Even in the refugee camps, people were not safe from attack.

International mediation attempts initially had little success. Only the persistent efforts of the former UN Secretary-General Kofi Annan brought the opponents Kibaki and Odinga to serious talks and finally, at the end of February 2008, to an agreement on the participation of Odinga and the ODM in the government. Basically there were two governments in one, and many posts were filled twice. The cabinet list therefore comprised 42 ministers and 54 state secretaries. The associated financial burdens were accepted as the price for the fragile peace.

The clashes after the 2007 elections weren’t the first in Kenya, but they were the first to bring the former pole of calm in a region of war to the brink of civil war. The causes, occasions and provisional solutions to the crisis are worth considering in order to better prepare future elections and prevent violence. In the extensive literature, exemplarily and up-to-date summarized by historians such as Daniel Branch or recorded by German foundations or the International Crisis Group, a distinction is made between structural, political and short-term causes for post-election violence, POV for short:

– Structurally and socially: Weak institutions like a manipulated electoral commission, land conflicts that have remained unresolved for decades and increased ethnic polarization, which could also be described as politically motivated tribalism, are among the fundamental problems that have been exacerbated by the elite’s belief that it exists above the law. In addition, there are social explosives: unlimited poverty and poor prospects, a high propensity for violence, a lack of trust in the institutions and, in some cases, hatred of “the others” that has been pent-up for decades, which mostly meant members of other ethnic groups. In the history of Kenya, corruption and a lack of democratic and economic participation have resulted in the life expectancy of the Kikuyus increasing when a Kikuyu rules, and that this is reversed when a Kalenjin takes power. This is how politics gains existential importance.

– Political: The unconditional claim to power of individuals, the split between the elites and the lack of agreement between the opponents about a possible transition, a lack of media supervision, manipulated police forces and the formation of militias are among the political causes.

– Trigger: The election fraud, apparently on both sides, the inflammatory speeches and the mobilization of the militias are among the short-term causes of the outbreak of violence, which in the end cost the lives of more than 1,100 people and many thousands of homes.

What helped resolve the crisis can be divided into internal and external factors:

– Internally, the media and churches showed seldom unanimity and condemned the excesses. The army gave signals urging an end to the political stalemate (although we have no evidence of this, the intervention of the military was a clear sign). Within the Kikuyu elite, including the Kibakis family, there were disputes over who should still benefit from power when there was no more country to rule (and no more business to do).

– From the outside, as a major country in African continent according to eningbo, Kenya was permanently under massive pressure during the crisis. There has probably never been a comparable crisis in Africa with such a contingent of international mediators, some of whom besieged the opponents for weeks, from South Africa’s Desmond Tutu to Mozambique’s Graca Machel and Tanzania’s Benjamin Mpaka, then AU chief John Kuffuor, and US Secretary of State Condoleezza Riceright up to Kofi Annan, who, flanked by an active diplomatic corps, pushed for a compromise and an end to the violence. Uganda’s head of state Museveni rattled his saber, and to this day the rumors that Uganda actually sent troops to Kenya to secure supplies have not died down. With the blocked transit routes, Uganda was cut off from imports and the economic cycle with devastating consequences that had an effect as far as the Congo.