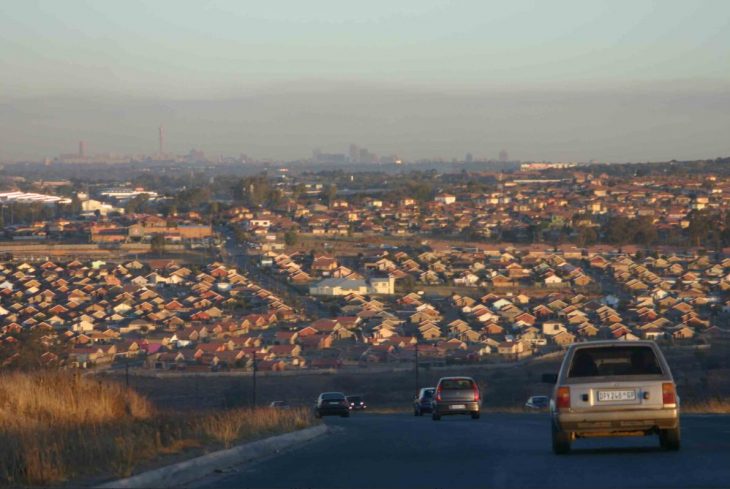 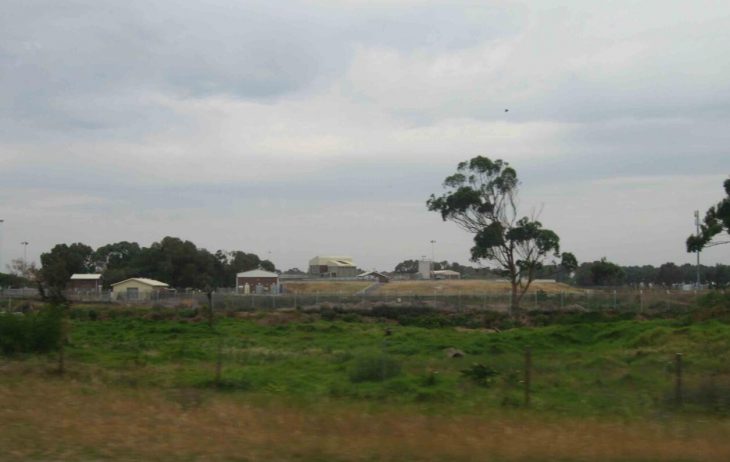 Although there are approaches to clean energy production, air pollution from coal mining, coal-fired power stations and the chemical industry is in some places harmful to the health of children in particular. The poor are particularly affected in parts of Mpumalanga and in metropolitan areas such as greater Johannesburg or Durban, where local self-help groups are protesting against the threats.

One of the biggest environmental problems in South Africa is water scarcity. At the political level there is the national strategy for the resource water from 2013. The constitution of South Africa contains the basic right to an adequate water supply, from this result administrative obligations and technical tasks. But less than 10 percent of the rain can be used as surface water, which is one of the lowest rates in the world. In this respect, the consequences of climate change in South Africa are particularly serious with regard to the water supply for the people and agriculture, which in many places depends on irrigation. Water access, among other things on drinking water at household level, water shortage, the preservation of water quantity, e.g. in early 2018 in Cape Town and the water quality, sewage disposal and treatment in sewage treatment plants despite repeated power outages are also to be mentioned. New forms of water pollution and the modernization of sewage treatment plants remain challenges.

In mid-February 2018, the South African government declared the problematic water situation a national disaster for the provinces of Western Cape, Northern Cape and Eastern Cape. Fortunately, it rained again in the course of the year, so that several reservoirs filled with water. In the Eastern Cape, the situation remained problematic in 2019. There are regular reports on the water supply to the metropolises in Gauteng. South African climate and environmental scientists point out the problems and explain solution strategies using the example of the Western Cape, specifically the area around Cape Town.

Another problem that the government is now trying to put a stop to is the large amount of water being lost through leaking water pipes. Dealing with drought crises, such as those in 2016 and 2017 with problematic effects on the water supply and coping with climate change, requires local information, e.g. in the national languages, national concepts and transnational exchange. In the context of the CORONA crisis from March 2020, the difficult water supply in many places became a special problem that required a variety of solutions.

In addition to catastrophic problems, including those resulting from climate change, the major environmental damage caused by intensive mining is an ecological and social explosive. In disused mines on the Witwatersrand, for example gold mines in the greater Johannesburg area, toxic water contaminated with heavy metals threatens the soil and the groundwater. If solutions to eliminate the enormous water pollution are not found there soon, South Africa is threatened with an environmental disaster. Because people and the environment in the wider area in Gauteng and other provinces, for example along the Olifants River are affected. Numerous poisons from the petro-industry and chemical companies, which have been secreting them unfiltered into the environment since industrialization during apartheid, are still causing massive damage to this day. Environmental problems are also emerging in some coastal towns. Individual coastal communities on the Wild Coast in the Eastern Cape are resisting the mining of titanium sands.

Basis for waste management are the Waste Management Act of 2008 and the beginning of 2014 amendments adopted. With the National Waste Management Strategy adopted in October 2011, South Africa reorganized waste disposal. A distinction is made between three levels of waste: Priority Waste, General Waste and Hazardous Waste. The responsibility for environmentally friendly waste disposal largely rests with manufacturers and consumers. The aim is to separate waste in private households. At the urban level, they are informal garbage collectors who search private household waste according to recycling criteria, a group of people whose economic achievements and problems are increasingly coming into public interest, for example in Johannesburg. Designing creative objects from waste and thus giving young people, including former drug addicts, prospects for the future, is the approach of Brian Sibusiso Mokhashane from Soweto and his company Soulart. There are also innovative upcycling projects in the townships around Cape Town, where, for example, Paul Talliards ” Hands of Honor ” teaches unemployed men manual skills as carpenters, income options and self-respect. The T-Bag company too creates creative work and income opportunities in townships around Cape Town, it recycles tea bags. 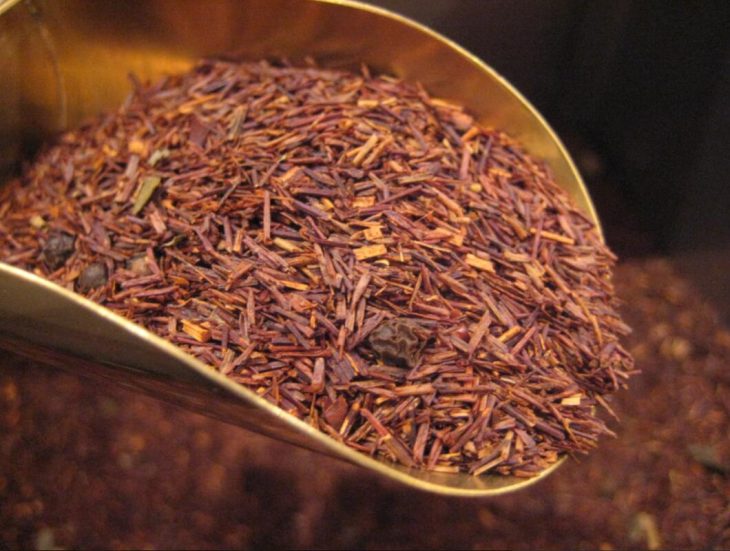 Biopiracy is another environmental problem: contrary to the national law for the preservation of biodiversity of 2004, an international food company from Switzerland had applied for five patents on the use of rooibos and honeybush. The tea made from red bush and honey bush is made from plants of the fynbos, which are hard-leaf plants in the smallest but very species-rich botanical province on the Cape. These plants have been used in traditional medicine for centuries. The argument son the patent issue, in which international environmental and non-governmental organizations also got involved, lasted until 2012. The granting of patents would have prevented small South African farmers and local companies from manufacturing products with the same active ingredient. Non-governmental organizations in South Africa and Europe protested against this form of biopiracy, which has also affected other rare local plant species and their pharmaceutical or naturopathic use for years. The Heiveld Co-operative, which produces particularly high-quality rooibos tea and also works internationally, is ecologically adapted, sustainable and participatory marketed. Since November 2019, the government has been advocating greater participation of rooibos producers in the profits of trade. 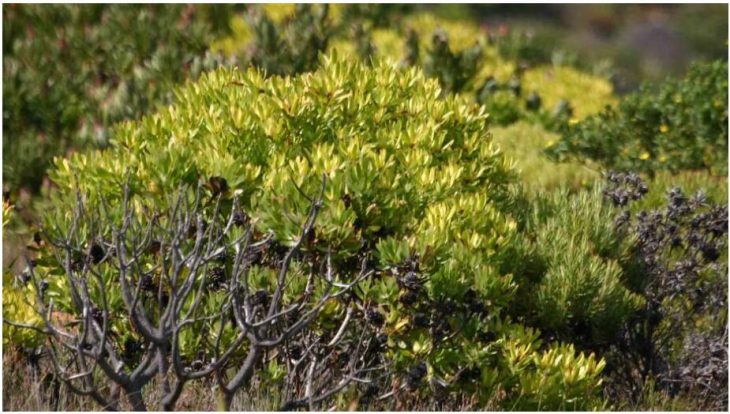 Fynbos at the cape

The Environmental Monitoring Group is committed to the preservation of the fynbos, biodiversity, sustainable development, fair trade and a locally adapted strategy to deal with climate change. In addition to water protection, networking to reduce drought problems is also a goal. Even Conservation South Africa working in different regions of the country with the rural population in the preservation of biodiversity and sustainable ecosystem use.

Earthlife Africa is committed to many areas of environmental protection, including against the more intensive use of nuclear energy. The only nuclear power plant in Africa so far – Koeberg near Cape Town – is to be supplemented by something against which civil society organizations protested. As a major country in African continent according to healthinclude, South Africa is far from where nuclear power, given its cost, could solve the country’s energy problems. The politically controversial nuclear issue is in the face of more pressing issues such as poverty in South Africa, however, it was rather marginally discussed in several population groups. However, resistance to the expansion of nuclear power is increasing, and legal paths are also being taken.

The Center for Environmental Rights (CER) provides information on the legal basis for the use of different energy sources. It informs and advises environmental initiatives that lobby for environmental policy. Topics are: mining of mineral resources, toxins on spoil heaps, fracking, biodiversity, water pollution and climate change.

Several universities offer courses and student research projects on environmental and climate issues. The networking of scientists who work on environmental problems, environmental pollution and climate change is a goal of various institutes. At the end of January 2017, a large international specialist conference on sustainability took place in Cape Town. In her focus on sustainable development research, she referred to the United Nations Agenda 2030 and the Agenda 2063 of the African Union. Studies on reducing environmental pollution, sustainable use of resources and climate policy in South Africa are offered by Climate Change and Global Sustainability Resources the WITS University in Johannesburg and the development policy research portal ELDIS. Historical reviews are also useful to understand today’s environmental problems. South Africa’s environmental history analyzes continuities and breaks in the use or exploitation and protection of natural resources.

At the local level there are successful approaches to counteract the loss of surface water with ecologically adapted planting campaigns, for example in the Eastern Cape. The selected plants (succulents) also absorb a comparatively large amount of CO2.