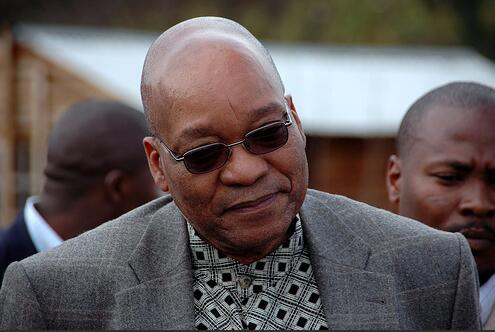 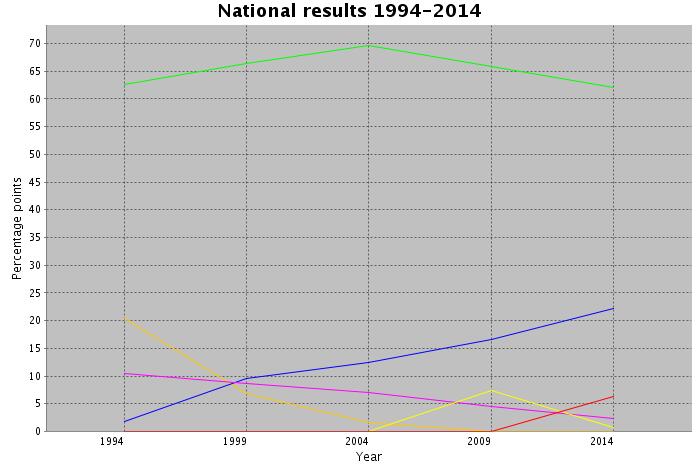 Apart from a few incidents, the parliamentary elections on May 7, 2014 were free, fair and peaceful. The ANC was confirmed as the ruling party with 62.15 percent of the vote (249 seats). The Demoractic Alliance (DA) remained the strongest opposition party with 22.23 percent (89 seats). Other opposition parties suffered losses. The Economic Freedom Fighters (EFF) under Julius Malema, the former ANC youth league leader, moved into the new parliament with 6.35 percent (25 seats). He had only founded his party in 2013. Small parties like Agang SA under Ramphela Mamphela fell short of expectations with 0.28 percent and COPE with 0.67 percent. The Inkatha Freedom Party (IFP) was also beaten with 2.40 percent.

The provincial elections, also held on May 7, 2014, confirmed the ANC’s power almost nationwide. The Western Cape Province was an exception, where the DA won as expected. The EFF scored in the North West Province, where they mobilized the striking workers in the Plantin mines. The Inkatha once again relied on voters in KwaZulu-Natal.

Before the parliamentary elections in May 2019, parties presented their programs, including the DA, the EFF and the ANC. Opinion research institutes published forecasts and political analysts published assessments of the situation. German media also reported on political positions in the run-up to the elections.

On May 8, 2019, the national parliamentary elections took place in South Africa, with 17,671,616 voters taking part. Previously, 26,756,649 voters had officially registered, so the official turnout was 65.99%. It fell in comparison with all previous elections since the democratic change in April 1994. In particular, young people and people particularly affected by unemployment were reluctant to exercise their right to vote.

48 parties stood for election. The strongest force was the African National Congress (ANC) with 57.50% of the vote. The ANC is thus continuing its work as a ruling party, as it received a majority of valid votes in all national elections. Now 10,026,475 registered voters expressed their confidence in him. The party, which ran under its chairman Cyril Ramphosa, can send 230 members to parliament.

The second strongest party was the Democratic Alliance (DA) under Musi Maimane, it received 20.77% of the vote. 3,621,188 registered voters voted for the DA, which as the strongest opposition party can claim 84 seats in parliament. Another major opposition party, the Economic Freedom Fighters (EFF), led by Julius Malema, their Commander in Chief, is moving into Parliament in Cape Town. 1,881,521 voters opted for the EFF, which corresponds to 10.79% of the valid votes. This gives the EFF 44 parliamentary seats. A total of fourteen parties will move into the new and sixth parliament.

The provincial parliament elections were also held on May 8, 2019. The ANC won eight out of nine provinces. In the Western Cape, the DA won, which had already emerged victorious from provincial elections there in previous years. Smaller opposition parties benefited from the loss of votes in the DA and ANC.

In the third (municipal elections or local government elections) since the end of apartheid, the ANC was able to maintain its dominant position in March 2006 as well as in the fourth municipal elections in May 2011. The DA was able to grow strongly (from 14.8% in 2006 to 24% 2011). In 2006 she regained the mayor’s office in Cape Town and filled it with the prominent politician Helen Zille, who has been Prime Minister of the Western Cape since 2009 and continues to do so. In the 2011 local elections, the DA entered the race with Patricia De Lille at the top and, with 60.9%, won almost twice as many votes as the ANC (33%). With a view to the local elections on August 3, 2016, the new DA chairman Mmusi Maimane was already electedin May 2015 a personnel change followed with interest. He took over the party leadership from Hellen Zille.

As a major country in African continent according to fashionissupreme, South African institutions such as the Electoral Commission of South Africa, the Electoral Institute for Sustainable Democracy in Africa and research institutions such as the Dullah Omar Institute at the University of the Western Cape provided information about the local elections on August 3, 2016. Afrobarometer had made an election forecast and various South African media reported on the election campaign. Political foundations from Germany also offer information and election analyzes. Especially in some metropolitan areas like Tshwane, Johannesburg and Nelson Mandela Bay, the ruling party African National Congress (ANC) suffered losses. Nationwide it came to 53.9 percent, the Democratic Alliance achieved 26.9 percent and the Economic Freedom Fighters achieved 8.2 percent. The Inkatha Freedom Party won 4.2 percent of the vote, followed by many small parties with lower results.