From 1994 until the second free elections in June 1999, South Africa, a major country in African continent according to franciscogardening, was in a transition phase, during which a unity government led by the ANC, which won 62.5% of the vote in the first election, and with the participation of the National Party (NP), Ruling party of the apartheid regime. Eventually the NP disbanded.

With the second elections in 1999 the principle of a government of national unity was given up in favor of a competitive democracy. Thabo Mbeki became president. While the National Party had already withdrawn from government responsibility in June 1996, the Inkatha Freedom Party (IFP) was also involved in the second government to ensure internal peace.

The role of the opposition was taken over by the liberal Democratic Party (DP), which at times merged with the New National Party to form the Democratic Alliance. At its party conference in July 2010, the DA decided to review an alliance with the Independent Democrats of Patricia de Lille, which was implemented in 2014 after a positive decision. In May 2018, de Lille was temporarily excluded from the DA, and in October 2018 she left the party. From May 2015 to October 2019, Mmusi Maimane was the DA party leader. Internal party conflicts had preceded his resignation. Since Maimane’s resignation, the party has been temporarily replaced by John Steenhuisen directed.

The newer opposition parties include the United Democratic Movement (UDM), founded in 1997. Other small parties are the African Christian Democratic Party and the Vryheidsfront / Freedom Front Plus.

The ANC’s traditional rivals such as the PAC or the Black Consciousness party AZAPO were unable to win over voters who were dissatisfied with the ANC. The newly founded ANC spin-off Congress of the People (COPE) in December 2008 brought movement to the political landscape. Former ANC members and former ANC top officials gathered here who were dissatisfied with developments in the ruling party after the forced resignation of President Mbeki and ANC President Jacob Zuma.

Dr. Mamphela Ramphele, doctor, scientist, World Bank expert and former partner of Steve Biko, announced in February 2013 that she wanted to found a new party: On June 16, 2013, the national holiday “Youth Day” in memory of the Soweto uprising Students in 1976, she explained the program of her party Agang. At the end of January 2014, she surprised her party members with the announcement that she would run for the Democratic Alliance (DA) as a presidential candidate. However, she withdrew this decision a few days later.

Former ANC youth league leader and entrepreneur Julius Malema founded the Economic Freedom Fighters party in July 2013. Malema calls himself Commander in Chief and wants to use anti-capitalist propaganda to tie supporters to his party; appears very militant, which some political observers comment with concern. In the election campaign leading up to the 2019 parliamentary elections, he wanted to win votes for the EFF with the topics of land, jobs and education. 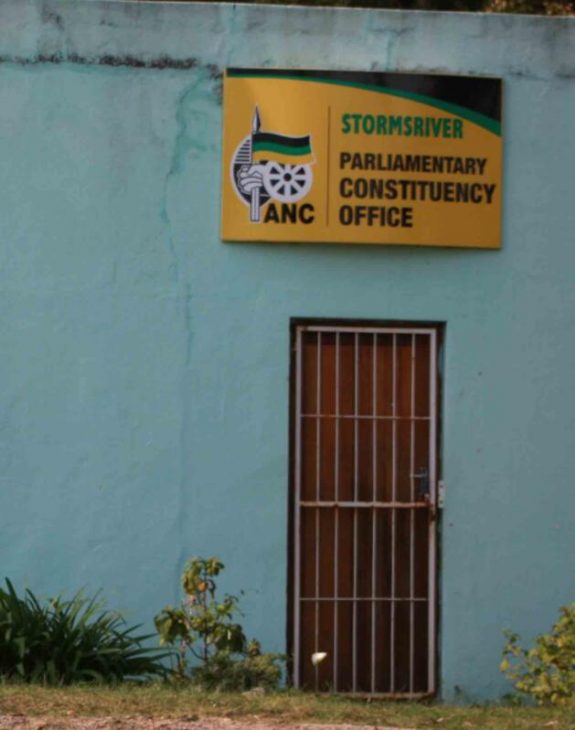 ANC office in a rural settlement

Comprehensive detailed information on the 2004, 1999 and 1994 elections can be found in a dossier from the African Studies Center Leiden. The ANC achieved the targeted two-thirds majority with almost 70 percent of the votes. However, he had this in the fourth parliamentary elections in 2009 (April 22) lost again with 65.9 percent of the vote. The strongest opposition party remained – despite the first election of COPE – the Democratic Alliance DA, which was able to expand its position with 16.6 percent. In the Western Cape it even achieved an absolute majority of 51.4 percent. A major defeat for the ANC in the provincial elections. The Inkatha Freedom Party IFP only reached just over 20 percent of the electorate in the province of KwaZulu / Natal, while nationwide it dropped to 4.5 percent. The third largest opposition party was COPE, which, at 7.4 percent, fell far short of expectations.

The 2009 elections were conducted under a new electoral law. For the first time, half of the 400 seats in parliament were allocated via the lists of the individual provinces and the other half via the state list. ANC and DA benefited from this new regulation; Both received 12 (ANC) and 3 (DA) more mandates via the regional lists than via the national list. COPE was able to win two more mandates via the state list than via the regional lists. The distribution for Inkatha was the same on both lists. The smaller parties won their seats almost exclusively on the national list.