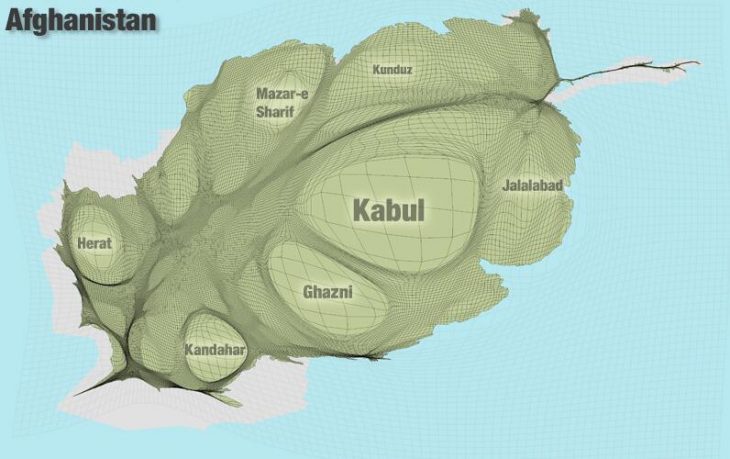 Afghanistan Population distribution in the grid

In Afghanistan, the main population centers are in the river oases on the edge of the central mountainous region (Herat, Farah, Kandahar, Maimana, Mazar-e Sharif, Kunduz) and in the inner-montane basin landscapes of eastern Afghanistan (Kabul, Jalalabad); Most of the irrigated arable land is in these areas. The highest population densities, namely up to over 200 residents / km², are reached in the Kabul-Charikar region.

Also relatively densely populated (30 to 50 residents / km²) is the plateau between Kandahar and Kabul, which is on average 2000 m high, as well as the subtropical valley landscapes on the southeast border with Pakistan (Khost, Kurram) that lead down to the Indus plain.

The central highlands, on the other hand, are only sparsely populated, apart from smaller basin landscapes on rivers such as Hari Rud, Khash Rud, Hilmend and Arghandab. The high mountain region of the actual Hindu Kush, the Pamir highlands in the extreme northeastern tip of the national territory (Wakhan Corridor) as well as the desert areas in the southwest and along the Iranian border are almost deserted.

With regard to the regional and local subdivision and structure, especially of rural areas, there are differences between the traditional ideas of the Afghan population on the one hand and modern state planning on the other.

The course of the main traffic routes in Afghanistan takes this population distribution into account: The country is essentially developed by a northern and southern trunk road, which are usually summarized as the “Great Ring Road “. The southern tract runs from Herat in a wide arc over Kandahar around the Massif Central and through the plateau in the southeast to Kabul; The northern tract, also starting in Herat, first overcomes the aforementioned Sabzak Pass and winds through the Murghab Basin and along the border with Turkmenistan into the northern Afghan lowlands, then southwards through the Kunduz River valley and over the Salang Pass to Kabul where it meets the southern stretch. There are connecting routes from Herat to Iran and Turkmenistan, from Mazar-e Sharif to Uzbekistan, from Kunduz to Tajikistan and from Kandahar and Kabul to Pakistan.

Apart from two route sections with a total length of less than 100 km, Afghanistan currently has no rail network.

One section of the route leads from Towraghondi in the province of Herat over the Turkmen border to Serhetabat. Of the approx. 10 km long route, only approx. 2 km are in Afghan territory. The other section runs from the Hairatan river port on Amu Darya to Termez in Uzbekistan. In May 2010, the construction was recorded for a 75 km extension of the railway line to Mazar-e Sharif and after postponements, the section was finally in August 2011 opened. Initially, however, this route will only be used for freight traffic.

In the event of further economic and political consolidation, however, it cannot be ruled out that the trans-Afghan rail projects of the 1970’s that were not implemented at the time will be revived. An Iranian consortium is currently building a railway line between Mashhad and Herat; later the line will be continued via Maimana and Mazar-e Sharif to Tajikistan. In connection with the upcoming development of the copper deposits at Aynak (Logar province), a railway line via Kabul and the Salang Pass to northern Afghanistan is also planned.

As a country located in southern Asia according to hyperrestaurant, Afghanistan has four airports with international flight connections.

The Kandahar International Airport, located about 16 km outside the city, offers domestic flights to and flights to Dubai, Mashhad and Delhi. Turkish Airlines has direct flights to Istanbul

The Herat International Airport, about 10 km south-east of Herat area, served alongside domestic flights and flights to Mashhad and Delhi.

All four airports have both a civil and a military area.

There are also a number of other airports of various sizes that have regional domestic flights in their program.

In principle, the Afghan constitution guarantees freedom of expression and freedom of the press, but in practice Afghan journalists often see reprisals and intimidation. Some of these have their origins in the Ministry of Justice, which is still dominated by conservative Islamic forces, which tries to restrict free reporting in the name of orthodox moral concepts. But even regional warlords are sometimes not interested in publicly articulated criticism. After all, journalists and television reporters are also massively threatened by violent attacks by the militant government opponents, who are grouped together under the name “Taliban”. Afghanistan was the most dangerous country for journalists in 2019 after Syria and Mexico and followed by Pakistan and Somalia, and has thus given up the sad top position of previous years.

In addition to these dangers, which affect all journalists, female media workers are also affected by social and cultural restrictions and are often exposed to harassment and sexual harassment in their work environment.

The booming private television sector is particularly affected by restrictions imposed by conservative moralists. Criticism is sparked above all by the appearance of actresses and singers in entertainment programs, which is perceived as too revealing. The war against the Taliban also led to censorship efforts on the part of the government, as the insurgents use modern media (especially the Internet) as a platform for their propaganda.

Since the fall of the Taliban regime, not only radio and television stations have flourished in Afghanistan. Despite the still low literacy level of the population, countless magazines and newspapers have been founded since then. The media landscape of Afghanistan is very diverse with over 80 television channels (national and local), over 170 radio stations and hundreds of print media.

By the way: In June 2017, Zan TV (translated: Women TV) will be the first Afghan television channel for women has gone on the air. The concept: television by women for women, without excluding men. A team of around 50 women, some trained, some qualifying through practical experience, produces the daily programs. In this way, experienced journalists find a job, as many TV stations mainly hire men, and younger women who otherwise have no access to education are trained. The programs on offer include news, entertainment programs, documentaries and talk shows. The social pressure is great, as women in particular are exposed to threats and hostility in media professions, but the audience ratings give cause for optimism. Certainly a courageous and important step for women’s rights in a male-dominated society.