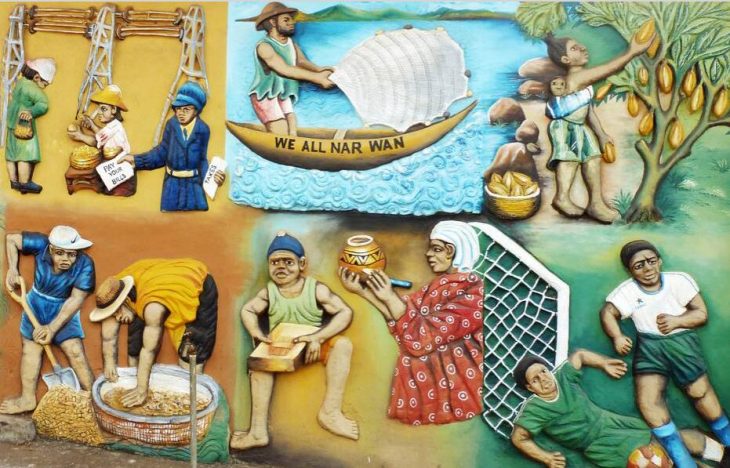 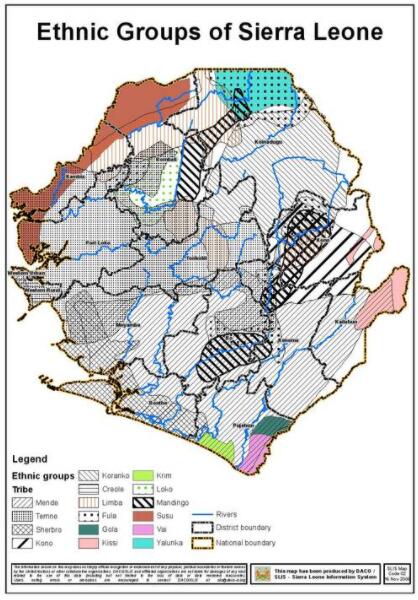 Around 16 ethnic groups live in Sierra Leone and have their own language and culture. Efforts have been made to establish a national identity since colonial times. However, the main frame of reference for most Sierra Leoneans remains the family and the local social order.

The largest ethnic group in Sierra Leone is the Temne with 35%, followed by the Mende with 31%, the Limba with 8.5%, the Fullah with 8%, the Mandingo with 7%, the Krio with 5%, and many other. The north of the country is dominated by the Temne and the south by the Mende. The language of the Krio, the Krio, is considered the lingua franca of the country. Due to its geographical distribution, the Temne language is mainly used in everyday life in the north and Mende as the lingua franca in the south. Both languages belong to the Niger-Congo language family. The official language is English and is spoken predominantly by population groups with a formal education. Two predominantly trading minorities who do not come from West Africa are the Indians and the Lebanese.

In Sierra Leone, there are hardly any serious conflicts over ethnic or religious affiliations. Marriages between members of different ethnic groups or religions are therefore common.

The war in Sierra Leone (1991-2002) was not based on an ethnic conflict. Preferences for ethnic and often related party affiliation in government, the armed forces and business are widespread, however. 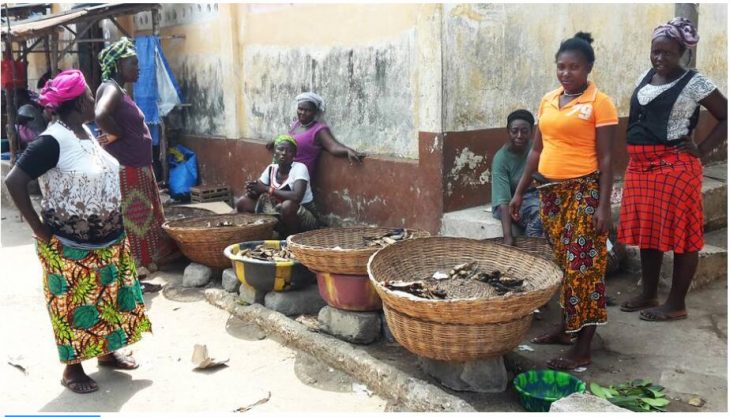 There is an extreme shortage of formal employment in Sierra Leone, and no reliable statistical data has yet been collected. The majority try to earn a living with odd jobs or as a trader. The subsistence economy is often used in families in parallel or alternatively to secure a livelihood.

The civil war brought economic activities to a complete standstill. Since then, it has not yet been possible to generate an upswing that will generate employment to the extent necessary. A weak private sector and too few well-trained specialists play a role here. The informal sector is therefore particularly important in Sierra Leone. However, income in the informal sector remains comparatively low and access to credit is relatively difficult.

The high rate of youth unemployment is a particularly serious social problem. There are some, but still far too few, projects that attempt to integrate young people into society. The young people form in their hopeless situation groups, which may be in the future a threat to security in the country. There are projects that address children and young people directly at the local level who do not have a home and have to live on the streets.

The proportion of the urban population is around 42%. There is a big difference between town and country in Sierra Leone in all areas of everyday life. The largest city in the country is the capital Freetown with over one million residents. During the Civil War years, many people in Freetown sought refuge for relative safety and better supplies of relief supplies. After the security situation improved, many were able to return to their villages or be repatriated. Nevertheless, Freetown has spread into the surrounding area in a relatively uncontrolled manner.

Other important centers are Koidu and Kenema in the east, Bo in the south and Makeni in the north. Other economically relevant centers can be found in the overview.

Cultural ideas, social and religious framework conditions have a decisive influence on the situation of women in Sierra Leone, a country located in Western Africa according to cheeroutdoor. Many women had to support themselves during the war and in the post-war period with the limited income-generating activities available to them and the children who lived with them.

The government and civil society are making some efforts to improve the situation of women and their political representation. In 2007, for example, laws on inheritance, marriage and divorce were passed giving women more rights.

Nevertheless, women mostly have only limited power over resources, their bodies and their own actions due to traditional social structures. 63% of women (15-49 years old) are of the opinion that in certain cases the man can beat the woman.

The many cases of marriages with underage girls are also problematic, although this has been banned since 2007. Around 39% of girls marry or are married before they turn 18, around 13% even before their 15th birthday. The frequent pregnancies of teenagers – over 30% of 18-year-olds have given birth to a child – is not only related to early marriages, but also to the extremely high risk of being raped as a girl or young woman.

The female genital cutting (FGM / C) is extremely widespread in Sierra Leone: 85-90 percent of all girls and women between are 15 and 49 circumcised, may cause potentially serious health consequences and constitutes a serious violation of human rights.

FGM / C is considered to be the first stage of initiation into women’s secret societies, which significantly determine women’s social life, and is therefore part of a ritual of transition from childhood to being a woman. The social pressure of belonging is lower in the cities, and accordingly the number of girls who are circumcised is lower than in rural areas. Among the 15-19 year olds, 74% are directly affected by FGM / C, which shows that the social acceptance of women is slowly becoming less dependent on it.