As a country located in Western Africa according to transporthint, Sierra Leone is a presidential democracy with a multi-party system. The president is directly elected by the people and is both head of state and head of government. The presidential and parliamentary elections take place simultaneously every five years.

Throughout recent history, Sierra Leone has had different constitutions. Sierra Leone has been a member of the Commonwealth since independence. Siaka Stevens proclaimed the republic in 1971. In the 1977 elections, his party, the All People’s Congress (APC), won an absolute majority. Siaka Stevens amended the constitution in 1978 to introduce a one-party system. If the opposition had previously been intimidated and suppressed, from 1977 onwards it was politically practically nonexistent. The one-party state existed until 1991 when a constitution was introduced that again provided for multi-party elections. In 1996 the first free elections since 1977 were held.

The 1991 constitution is still in force today and is made up of British and American elements. There is a horizontal separation of powers with the legislative, executive and judicial branches. The Parliament as a legislative power has a chamber with 146 seats, of which 132 seats are intended for members of parliament, who are elected by direct popular vote and fourteen seats for the representation of Paramount Chiefs are reserved. These fourteen MPs from the 14 districts represent the Paramount Chiefs of the 190 Chiefdoms (up to 2017 there were 149 Chiefdoms), with the Paramount Chiefs in the individual Chiefdoms being elected by the people for life.

In April 2007 a first ” Constitutional Review Committee “, which emerged from the peace process, made recommendations for a reform of the constitution. Another committee was set up in 2013 and presented its final report in early 2017. Among other things, it recommended the creation of a separate Chamber of Parliament for the Paramount Chiefs. The Koromas government proposed implementing around a quarter of the recommendations, but the process was suspended due to the change of government. 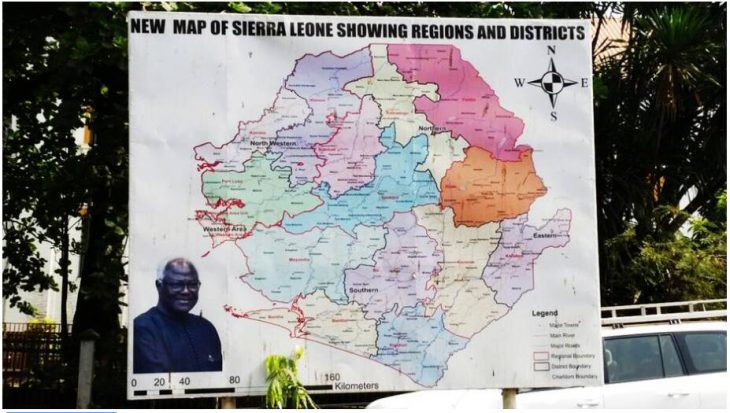 The four regions consist of fourteen districts (as of August 2017). At the district level there have been elected District Councils since 2004, which are supported by District Committees. The elected municipalities are getting more and more responsibility in the course of the decentralization policy.

The Western Area includes the former crown colony of Freetown and its surrounding area and is divided into Western Rural and Western Urban, so that Sierra Leone has been divided into sixteen districts since 2017.

In these districts, the traditional form of government of chieftaincy can be found parallel to the structures described. That is why Sierra Leone is divided into 190 chiefdoms (since 2017, previously 149). These are administered by lifetime elected Paramount Chiefs. The chiefdoms have their own responsibilities with regard to police violence and traditional jurisdiction. Women cannot be crowned chiefs in all chiefdoms. But there is also a tradition of women as chiefs in southeast Sierra Leone, the most prominent example being Madame Yoko.

The legal system of Sierra Leone is essentially characterized by the coexistence of three systems, the state (level of the districts), the traditional (level of the chiefdoms) and, in some cases, Islamic law. The state judicial system is based on British Common Law and consists of:

The judges for the three highest courts are appointed by the president but must be approved by parliament. The courts at the level of the chiefdoms are staffed by lay judges. Appeals can be lodged against judgments of the lower courts.

The judiciary has been reforming since the end of the civil war. It suffers from insufficient personnel and material resources. In addition, corruption and nepotism are widespread at all political levels. Furthermore, the state judiciary is not completely independent of the executive branch. Politicians repeatedly attempt to interfere in legal proceedings.

In 2007, three laws publicly known as Gender Acts were passed. The laws relate to domestic violence, sexual offenses and inheritance law. It is a challenge for Sierra Leone to inform the entire national territory of new laws. The practical implementation of the laws is made more difficult by the traditional courts, which follow their own case law and over which newly enacted state laws have little influence. Because in court proceedings before traditional courts, women still have the status of a minor. A quota for women is currently being discussed at the state level in order to increase their participation in all areas of society.

The police and the Ministry of Internal Affairs, Local Government and Rural Development are responsible for internal security. Despite a comprehensive reform of the security sector, structures that are sometimes corrupt are predominant. The army and the Ministry of Defense and National Security are responsible for external security. Currently there are Sierra Leonean soldiers on a peace mission in Sudan. 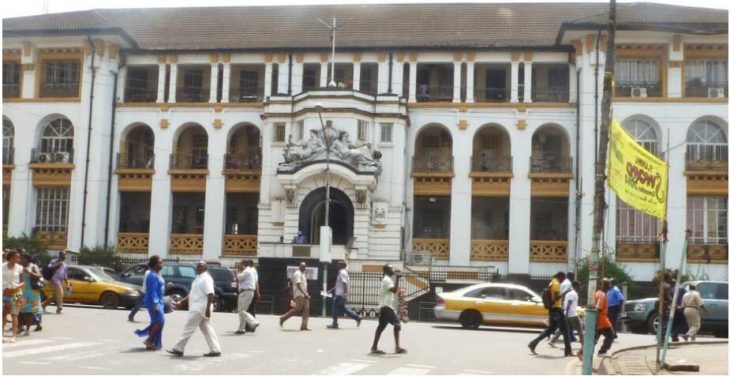