The problems of the Sierra Leonean state in the decades before the civil war affected society as a whole, but led to severe disadvantages for individual sections of the population. Among other things, this resulted in a landless youth in the city and in the country, as well as unemployed academics and angry students, some of whom took part in protests against the one-party rule of Siaka Stevens and then had to reckon with reprisals of varying severity or who emigrated. The state’s problems worsened during the subsequent reign of Joseph Saidu Momoh in the 1980’s.

In 1991 the rebel movement Revolutionary United Front (RUF) founded by Foday Sankoh began the armed struggle in the east of the country. The official goal was to overthrow the corrupt government. However, she never concretized her ideas of a future in Sierra Leone under the rule of the RUF. With the support of Liberian rebels around Charles Taylor, the RUF conquered the eastern area of ​​Sierra Leone and took strategically important diamond mines for them. Momoh’s government in Freetown was overthrown on April 29, 1992 by a group of young officers led by Captain Valentine Strasser. They were called the National Provisional Ruling Council (NPRC). Four years later, Brigadier Julius Maada Bio received a palace coup at the NPRC. This ordered the immediate holding of free elections. They were carried out the following month and on March 29, 1996 the elected President Ahmad Tejan Kabbah took power. The clashes with the RUF continued, however, and the security situation in the country remained unstable. Ultimately, nothing changed in this regard as a result of the Abidjan peace agreement concluded on November 30, 1996.

On May 25, 1997 there was another government coup by a group of officers, NCOs and men of the army under the leadership of Major Johnny Paul Koroma, the Armed Forces Revolutionary Council (AFCR). However, during its existence the AFCR allied itself with the RUF to form the People’s Army and thus coined the name “sobels”: Soldier by day, rebel by night. This resulted in a reign of terror lasting almost nine months, during which unimaginable atrocities were committed. In February 1998 the ECOMOG reaction force of the Economic Community of West African States (ECOWAS) managed to get the rebels to withdraw from Freetown.

President Kabbah then returned from his exile in Conakry / Guinea on March 10, 1998 and took his place as President again. Even with the help of ECOMOG, it was still not possible to bring the country completely under control. The rebels began “Operation No Living Thing” with even greater brutality on the civilian population. Finally, on January 6, 1999, they succeeded again in attacking Freetown. The eastern part of the city was badly destroyed and more than 5,000 people were killed. In addition, around 4,000 children were abducted, 60% of them girls.

In July 1999, the rebels and the government in Lomé signed another peace agreement. The violence continued nonetheless, and the UNAMSIL peace mission was initially unable to bring it under control. In May 2000, the RUF managed to capture over 500 blue helmets. The British Army then intervened with a military operation and was able to turn the situation around in a very short time. The UNAMSIL force was then increased to the largest UN mission to date with 17,500 soldiers. The official end of the civil war was announced on January 18, 2002.

Pacification of the country 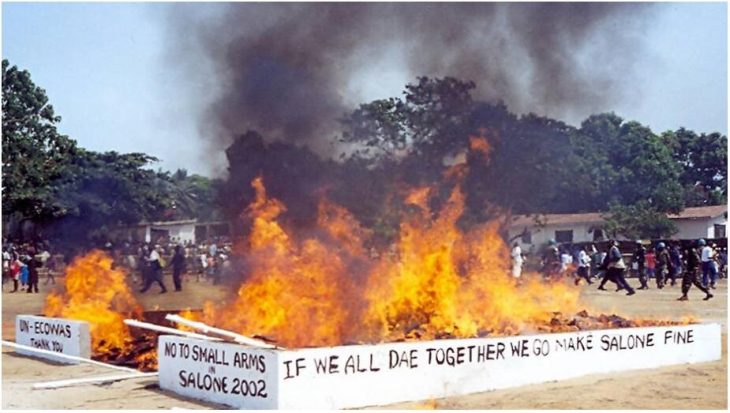 Official end of the war on January 18, 2002 – symbolic burning of rifles

After the official declaration of the end of the war and the pacification of all areas, the four-year state of emergency was lifted on March 1, 2002 and the parliamentary and presidential elections could take place on May 14, 2002. President Kabbah was re-elected with 70.1% of the vote, and the RUF, which had been converted into a party, could not win a seat in parliament.

A repatriation program for civil war refugees initiated by the United Nations High Commissioner for Refugees (UNHCR) was completed in July 2004: A total of 270,000 Sierra-Leonean refugees were able to return to their homeland. The people who had fled to Liberia were also repatriated to their homeland. UNAMSIL’s mandate ended on December 31, 2005. It was replaced by UNIOSIL. This should support the Sierra Leonean government in rebuilding and holding democratic elections in 2007. In 2008 UNIOSIL was finally converted into UNIPSIL. The mission expired on September 30, 2010.

Dealing with the war crimes

Two days before the civil war officially ended, an agreement was reached between the State of Sierra Leone and the United Nations to set up a special tribunal for Sierra Leone in order to begin a social process of coming to terms with the crimes against humanity committed during the civil war. In addition, a truth and reconciliation commission based on the South African model was set up.

The main culprits in the war crimes committed under the peace agreement of November 30, 1996 were to be tried at the Special Court for Sierra Leone, a country located in Western Africa according to a2zgov. The Special Court consisted of international legal experts and judges appointed by the Sierra Leonean government; it was therefore a hybrid dish.

Those primarily responsible for human rights crimes, regardless of whether they belonged to a particular war faction, were charged. In this way, very popular figures such as the former head of the Civil Defense Forces (CDF) and former Interior Minister Hinga Norman were indicted in some parts of the population. However, he died before the trial opened. The whereabouts of the defendant Jonny Paul Koroma, leader of the AFRC, has not been clarified.

The case against the former President of Liberia, Charles Taylor, has been moved to The Hague for security reasons. He was sentenced to 50 years in prison for his involvement in the Sierra Leonean civil war. This judgment was confirmed after an appeal on September 26, 2013. He was then taken to a British prison.

In late 2003, the work of the Truth and Reconciliation Commission (TRC) concluded with a 5,000-page report. The commission contributed to the moral reappraisal of the civil war: the statements of 8,000 victims were summarized in its final report. The report also contains recommendations to the Sierra Leonean government, including on compensation for civil war victims. There are also various criticisms of the work of the TRC from civil society groups. 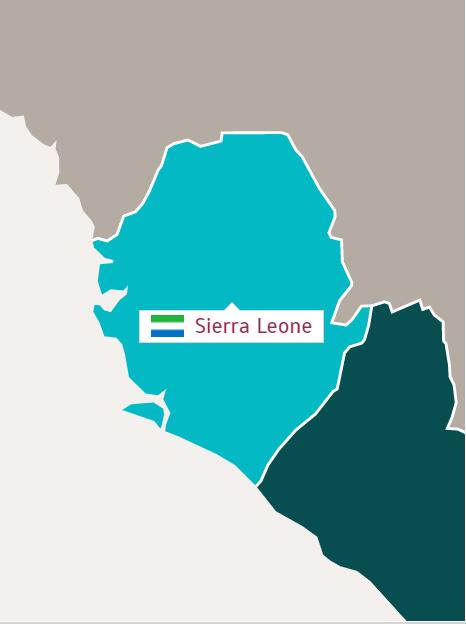