Socialist Yugoslavia had produced a relatively liberal media landscape with a large base of professional journalists. Under the Milošević regime in Serbia at the end of the 1980’s and the beginning of the 90’s, there was a dichotomous differentiation into state and a small number of independent, oppositional media. The state, public media became an instrument of war propaganda, nationalist agitation and hate speech, a purge of hundreds of journalists took place. The state television RTS, along with the daily newspapers Politika and Večernje novosti, became the most important state media for war propaganda. Opposed to these were some critically independent media that reported objectively on the role of Serbia in the Yugoslav wars and on the authoritarian regime, and gave civil society and the party-political opposition a public voice. These included mainly print media such as the weekly Vreme and the daily Borba – later Naša Borba, as well as the Belgrade radio station B92 and the capital city television station Studio B. Many of them were exposed to administrative repression by the regime. These media received moral and financial support from western countries.

After Milošević’s fall, the front line in the media dissolved, the regime-loyal directors and editors-in-chief in the public media were replaced, in many cases they were replaced by journalists who had been forced out of this media a decade earlier. A democratic legal framework was created. Much public media, especially the print media, has been privatized. As a result of the privatization process, the media landscape has been commercialized.

However, all these measures have not led to a fundamental improvement in the media situation. Many structural problems have remained in the Serbian media landscape and new ones have been added, which hinder the development of free, critical journalism.

The main structural problems are:

As a result of these problems, there is a strong tendency towards scandalizing reporting. At the same time there has been a decline in investigative journalism and increased car censorship.

The formerly independent media from the 1990’s are now in a worse position under commercial conditions than under the Milošević regime. Some of the journalists working in these media have switched to the Internet in recent years, where they have founded alternative news portals such as E-Novine or Pešćanik. With the weekly magazine Novi Magazin, a press product in the tradition of the critical media of the 1990’s has recently appeared on the Serbian media market for the first time in a long time.

The organization Freedom House rated Serbia’s media as “free” in 2017 and placed it in 73rd place of all countries in its annual global ranking, but at the same time emphasized a negative development in terms of media freedom. In 2018, Freedom House downgraded Serbia from “free” to “partially free”, with continued political pressure on independent media, opposition and civil society and the continued erosion of political and civil rights. The country fell back to 67th place.In 2019, Reporters Without Border downgraded Serbia 14 places in their annual avoidance freedom index to 90th place in the World Press Freedom Index This negative trend continued in 2020, Serbia slipped another 3 places to 93rd place.

In a press release at the end of May 2014, the OSCE criticized the deletion of blogs and the blocking of websites that had reported critical of the government’s crisis policy during the flood of the century as part of the declared state of emergency; at the same time, some people were arrested for allegedly spreading panic on social media. These incidents were used by the European Commission in its progress report for 2014 to criticize the lack of freedom of the press, which led the Commission to public objections from Prime Minister Vučić.

In mid-January 2015 the conflict between Vučić and the EU reached a new high point. In response to a corruption report by the Balkan Investigative Reporting Network (BIRN), a regional network of investigative journalists, Serbian Prime Minister BIRN accused the EU of lying and also accused the EU of paying this medium to attack the Serbian government.

After the early elections in April 2016 and the local elections, in which the SNS also gained extensive control over local governments, the governing coalition further expanded its control over the public service media. The government used three new media laws required by the EU, which stipulated the introduction of market economy rules in the media sector. Since no real market economy structures have emerged in Serbia so far, the ruling party used the reforms to bring most of the remaining local media in the province under its control.

Immediately after the election victory in the Vojvodina province, the SNS took action against the independence of the radio and television station RTV Vojvodina. The new board of directors removed the program director, whereupon the director and the editor-in-chief resigned. A new interim management of the station removed numerous editors and journalists and discontinued individual political programs. There were demonstrations by citizens in the capital of Vojvodina, Novi Sad, against the policies of the new provincial government.

The next attack on the remaining independent media in Serbia followed in early 2020. The independent regional television broadcaster N1, which belongs to CNN, was disconnected from the cable network on January 1 after a contract between N1 and the cable company belonging to the Serbian state-owned company Telekom Serbia expired. The conflict has led to international criticism regarding the further restriction of press freedom in Serbia. According to topb2bwebsites, Serbia is a country located in Southern Europe. 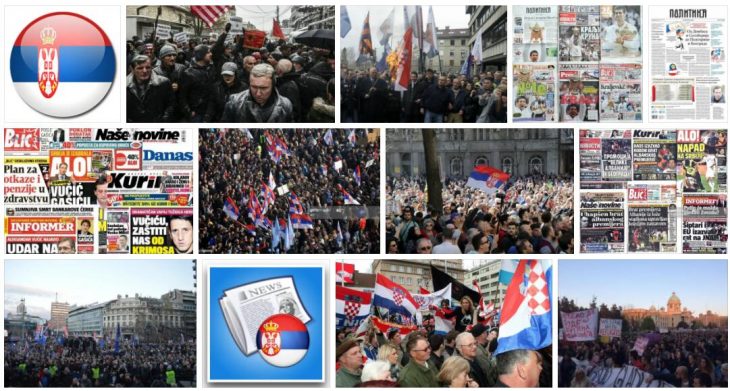 Internet news portals and social media have become important, supplementary sources of information in Serbia. A large majority of Serbian citizens use the internet, up from an estimated 4.7 million in 2015. However, freedom of information on the Internet is restricted by various forms of government intervention. According to various analyzes, the Serbian government uses various covert methods to influence the flow of information on the Internet. At the same time there are occasional intimidation attempts by the police against journalists and other social media users. During the floods in 2014, for example, several citizens who had documented the failure of the authorities in their posts on social media were interrogated by the police for allegedly spreading panic.