The multi-ethnic character of Serbia also shapes the language landscape. The main official language in Serbia is Serbian, which is spoken virtually everywhere in the country. In the northern Serbian province of Vojvodina, Hungarian, Croatian, Russian, Slovak and Romanian are recognized as official languages in addition to Serbian. Albanian is spoken in parts of southern Serbia (Preševo Valley). 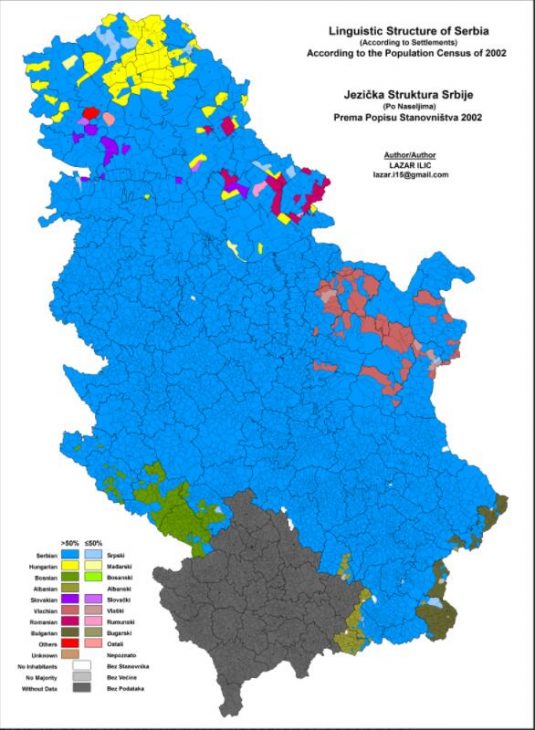 According to the constitution, which came into force in November 2006, the Serbian language in Serbia is officially written in Cyrillic script, with the Latin script also being used in parallel in the media and in everyday life – especially in Belgrade and Vojvodina, less so in central Serbia and in the south.

According to thefreegeography, Serbia is a country located in Southern Europe. The vast majority of Serbia’s residents are Christians. About 6.3 million (approx. 84%) of the population profess the Serbian Orthodox Church, there are also religious minorities, especially Catholics, Protestants and a few New Apostolic Christians. About 3% of the population are Muslim. They live in Sanjak in southern Serbia, where they form a slim majority.

The Serbian Orthodox Church has a special role in the national history of Serbia. After the territory of the Kingdom of Serbia with its center in Kosovo fell under Ottoman rule for several centuries in the 14th century, it was the autonomous Orthodox communities with their spiritual center, the Patriarchate of Peć, who became the keepers of Serbian culture and folk tales. In the 19th century, in the emerging national movement and national historiography, a close connection between nation and religion, between national movements and the Orthodox Church developed. In the ethnicizing disintegration of Yugoslavia, which meant the liberation of the churches from communist control and regulation, the Orthodox Church entered into an ugly alliance with Serbian nationalism of the 1990’s. This led the church and larger parts of its dignitaries to the point of legitimizing ethnic warfare and violence. At the same time, the church became the leading force in a conservative re-traditionalization of Serbian society. In recent years, the political influence of the church has been put into perspective, and it is again concentrating more on its traditional social role.

In general there is freedom of religion in Serbia. However, the Serbian constitution and laws only recognize 7 “traditional” denominations, which results in a certain amount of discrimination against other religious groups and their members, for example in the registration of religious groups – an area in which there has been recent progress. At the same time, the Serbian Orthodox Church enjoys a clear preference over other denominations. The U.S. State Department’s Latest Religious Freedom Report for 2019 confirmed that Serbia had a satisfactory level of religious freedoms overall. However, he noted cases of everyday discrimination, for example against Jehovah’s Witnesses, also by the police, which the authorities are only partially investigating.

The Serbian cuisine is counted to the so-called Balkan cuisine. The most distinctive feature of this largely rural cuisine is the large selection of grilled and other meat dishes. The Serbian cuisine was significantly influenced by the Greek, Turkish, Austrian, Hungarian and Italian cuisine. Dishes such as Serbian bean soup (Serbian Pasulj Čorba) or beans (Pasulj), sarma (stuffed cabbage rolls), Serbian rice meat (Serbian: Đuveč), suckling pig (Serbian: Pečeno Prase) or Ćevapčići are in many throughout the Balkans Variants can be found, especially in German-speaking countries, however, they are simply recognized as part of a Serbian cooking culture.

There are numerous Serbian beers and wines. The variety of schnapps and other high-proof drinks is particularly large.

God of righteousness, who has saved

us from destruction up to now,

the ship with a mighty hand, defend the Serbian future,

Some of the dear Serbian brothers

for every splendid (a) glorious work,

unity will be the defeat of the horned

and the strongest feasts of Serbs.

The Serbian glory shines from the grave of the gloomy son

, a new time has dawned,

new happiness, God give us.

fruit of five centuries of struggle,