The healthcare, like the rest of the social systems in Serbia, has come under severe economic pressure since the 1909s. Serbia had taken over a state health system from Yugoslavia, in which all workers and employees as well as the majority of the self-employed paid a fixed portion of their wages (12.3%) into the state health insurance fund, from which the free provision of medical care for the population was financed. As a result of the economic decline, the system became unstable, with 2 million contributors and 7 million insured. The health fund accumulated a large deficit, the unsustainable financing of free services was increasingly supplemented by direct payment for services by the insured. Healthcare salaries fell dramatically,

In the first half of the last decade, the Serbian government began reforming the health system with the help of the World Bank. Transparency in the health system, especially in the private sector, has been increased significantly. The expenditure of the insurance fund could be stabilized. A modern medical concept that focuses on preventive medicine was introduced. The structural problems of the Serbian health system have remained. This mainly relates to the growing funding gap caused by the public health insurance system, which is due to an aging population and a low level of employment. In addition, 20% of the population (public sector employees and their dependents) pay health insurance contributions from the state budget. While public financing of the health care system decreased, the share of private expenditures in total health care expenditures rose to 42.4% in 2017. These are direct payments by the citizens, often due to structural corruption. Added to this is the increasing migration or recruitment of doctors and nurses to Western Europe, particularly to Germany.

Overall, public spending on healthcare in Serbia is relatively high with comparatively poor performance. Health expenditure in 2019 was 9.1% of GDP, close to that of the richest EU member states (Germany 11.5%, Austria 10.3%). The number of hospital beds and doctors per 1,000 residents, on the other hand, at 5.7 and 3.1, respectively, were significantly below the figures for EU countries with comparable expenditure levels (Germany 8.3 and 4.2).

In 2016, there were 2,700 people infected with HIV registered in Serbia. Other relevant infectious diseases in Serbia are tetanus, diphtheria and hepatitis A and B.

The challenges of the corona pandemic

The corona pandemic is a major challenge for the Serbian health system. As for most countries in the world, the first problem was the lack of protective equipment and corona tests, as well as the capacity limits of intensive care medicine. Since 1990, 16% of intensive care beds in Serbia have been dismantled. The capacities of ventilators remained unclear at the beginning of the crisis, as the number was declared a state secret by the government.

The actions of the Serbian government therefore focused on the rapid procurement of ventilators, through purchases such as donations, as well as protective equipment and tests. In addition, additional bed capacities of 3,000 and 1,000 beds were created at the Belgrade Exhibition Center and at the Novi Sad Exhibition Center. At the same time, the government decided to increase health expenditure by 100 million euros. This includes a 10 percent wage increase in the healthcare system – which, however, only corresponds to the amount of wage cuts made in recent years. Eventually the government banned the export of certain medical goods.

Due to the massive decline in the number of new infections in the course of April and the lifting of the state of emergency and lockdown at the beginning of May, the additional bed capacities in Belgrade and Novi Sad were reduced again.

According to programingplease, Serbia is a country located in Southern Europe. 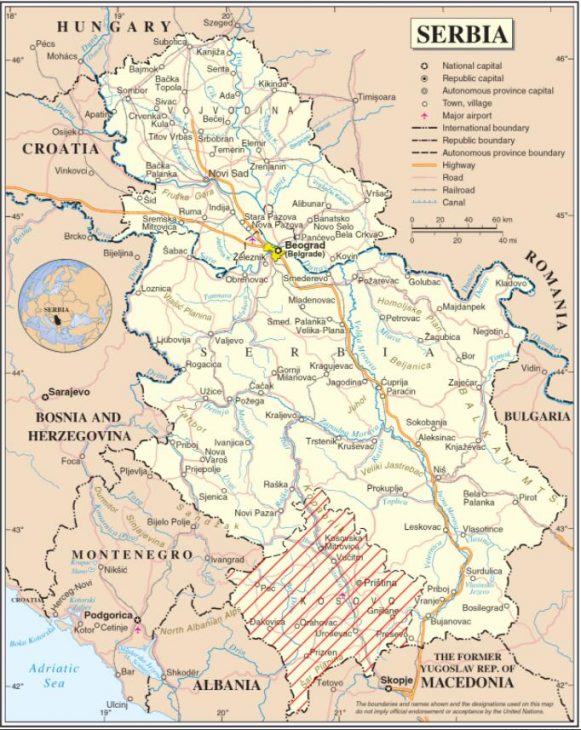 Serbian history was shaped by the country’s geographic location between the Orient and the Occident. Serbia became the first Ottoman province in the Balkans to gain state independence in the 19th century. The country played a central role in the establishment of the 1st and 2nd Yugoslavia and played a key role in the armed conflict of Yugoslavia.

Serbia has undergone a fundamental restructuring of the market economy in the last ten years and has survived the global economic crisis somewhat unscathed. However, major reforms and the modernization of industry and infrastructure are still pending.

The culture of Serbia is considered to be one of the most diverse of the Slavic peoples. Serbia has a rich tradition in literature, music, architecture. Here, continental European and oriental influences mix. Serbian cuisine was significantly influenced by Greek, Turkish, Austrian, Hungarian and Italian cuisine.

Before traveling to Serbia you should inform yourself about entry and residence regulations as well as health care. Thorough preparation in matters of security, infrastructure and communication is also recommended for practical orientation in everyday life in Serbia.