To apply for a place at the universities of the Uncle Sam country, it is necessary to do a kind of “local ENEM”. These tests consist of standardized assessments to measure candidates’ knowledge. The best known are SAT and ACT. In general, the main objective of these two tests is to allow universities to evaluate their candidates under the same parameter, regardless of their backgrounds . Check now a little more about each one of them and their main differences:

The Scholastic Aptitude Test (SAT) is managed by the College Board, a non-profit association in the United States. It is the most common admission test in the country and consists of three assessment areas: writing, language and text interpretation and mathematics. Each of these sections has subdivisions, adding a total of 10 sections. The test also has a mandatory writing. It lasts a maximum of 3 hours and 45 minutes and your maximum score is 2400 points (800 for each section).

ACT is a test of ACT, Inc., also a non-profit institution. In addition to the areas already mentioned above, the ACT also has a section called Science Reasoning, which aims to evaluate the candidates’ scientific reasoning. Another differential is the optional Writing section, which consists of producing an essay. But be careful: although optional, some Universities require the score of this section. The maximum time to perform the ACT is 3 hours and 35 minutes (including optional writing time). The maximum score is 36 points.

Difference between SAT and ACT

The two exams SAT and ACT are study aptitude tests, i.e. they do not ask about knowledge from specific school subjects, but are intended to provide information about whether someone has the general cognitive and analytical skills to successfully master a university degree (“college readiness”). This is done through language and math tasks tested. You have to answer questions about academic text passages, improve the given texts linguistically and stylistically and solve tasks from various areas of mathematics – all in multiple-choice format. In addition, short essays may optionally be written if the universities so require. Both tests are now very similar; An important difference between SAT and ACT is that there is a part of the ACT with scientific questions (“Science”) that the SAT does not have. Both exams take around 4 hours. Failure is not possible; at most, you may not get enough points for the university of your choice. Then you can just do the test again. Oh, and because that is what is asked more often: Both tests come from America and are carried out in English all over the world 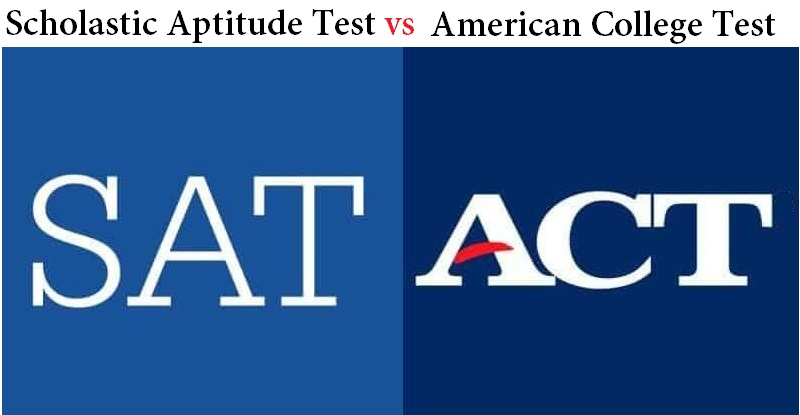 Where and when to take?

You do not need to travel to the United States to take these tests. Both are performed in Brazil! The SAT is applied 6 times a year in several cities in the country, usually in the months of January, May, June, October, November December. The ACT takes place 4 to 5 times annually, in the months of April, June, September, October and December. In both cases, the race must be scheduled in advance.

SAT or ACT: which one to choose?

It depends a lot. But a good way to make that decision is to assess the main differences between the two. The SAT is an exam that requires a lot of critical thinking, so your questions may not be as straightforward with ACT questions. Another key point is the vocabulary: the SAT is more demanding in this regard.

The way the evidence is distributed also varies. In ACT each content is divided into blocks. In the SAT, since it has more subdivisions, it is easier to answer the questions in an interleaved way, with greater “breaths” between one content and another. Finally, ACT is more general proof. That is, the final score matters more than the scores of each section individually. On the other hand, the SAT is exactly the opposite: the performance in each section is what matters most.

The differences do not stop there because there is still another important point: ACT recently became a computer test in locations outside the United States. On the other hand, SAT continues in the traditional way, with paper and pencil.