According to the College Board, there are 2 test centers for SAT and SAT Subject Tests in Slovakia. Please note that before you register either of the SAT exams, you should choose your test date and test location. Each testing location is affiliated with an educational institution, such as high school, community college, or university. The following test centers administer one or more of 2019 and 2020 SAT tests in Slovakia. 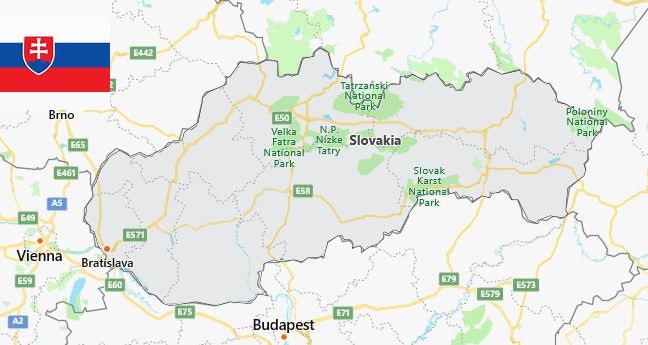 The Slovak Republic, founded in 1993, has a parliamentary-democratic system of government. The head of state and commander in chief of the armed forces is the president. He is elected for 5 years and can be re-elected once. In 2019, Zuzana Čaputová was elected to this office. The legislature lies with the National Council (Národná rada). Igor Matovič (OL’aNO) has been Prime Minister since 2020.

Since the National Council elections in 1998 in particular, great efforts have been made to adapt the legal system in all areas to the requirements of a market economy.

In 2006 compulsory military service was abolished. The armed forces of the Slovak Republic consist of volunteers and professional soldiers. They took part in SFOR, KFOR and ISAF operations. The country has been a member of NATO since 2004. In 2019, the share of military spending in gross domestic product was 1.74%.

After the Velvet Revolution in 1989 and independence from 1993, a change took place in the country: the economic system was reformed in a market economy, democratic reforms aligned the country with Europe, and society was grappling with the legacy of communism. The restructuring also had its downsides: the unemployment rate was 20% for many years, the population shrank, the welfare state reacted very slowly to challenges such as the pension reform, the political elite still has to grapple with serious problems: nepotism, embezzlement of EU funds, Allocation of important positions to the decision-maker agreeable people, extremism.

The media landscape is diverse and has a high share of the private sector. There is a public radio and television company (founded in 2011) and radio, which has existed since 1923.

From 6 to 16 years of age there is a general nine-year schooling requirement. Attending state schools is free of charge. Private and church-affiliated schools have been permitted since 1990. The primary level (grades 1–4) is taught in a nine-grade elementary school (základná škola). After that, the same school can be continued up to grade 9 and completed with the middle school leaving certificate. It is also possible to switch to other educational institutions. These combine the secondary levels I and II and lead to the matriculation examination. These schools include the grammar school leading to the Abitur (gymnázium) and the technical middle school as well as the vocational middle school with or without a high school diploma. Members of national or ethnic minorities can choose from native-speaking and combined bilingual schools.

In the 20th century, and especially with the establishment of the Slovak Republic in 1993, an economic and industrial boom began in the country, which had been dominated by agriculture until then, with the help of foreign investments. The Slovak economy is heavily dependent on exports and therefore reacts strongly to the economic situation in other European countries. Germany, Poland, Russia and Austria are among the most important trading partners. Slovakia has the highest per capita car production in the world. The main exports are cars, car accessories and electronic products. Numerous supplier companies produce mainly in western Slovakia, VW also has a plant here, as well as Kia, Peugeot, Citroen and Jaguar-Land Rover. The production range is expanded to include electromobility. The industrial sector employs 36% of the workforce and generates 31% of the national value added (GDP).

The one-sided economic structure, which is dependent on the automotive industry, is to be increasingly supplemented by information and communication technology and the so-called shared service centers, which provide accounting and other services for companies across Europe. This service sector is mainly located in Bratislava and Košice. The service trade with tourism and transport is also gaining in economic importance. 61% of the workforce generate 56% of GDP. Check justinshoes to see Europe Trade.

Mining now only plays a subordinate role. The formerly rich ore deposits are largely exhausted. Prospecting permits have been granted for uranium, but popular protests are blocking mining. The country is dependent on imports for many mineral resources. Electric power is generated by hydropower plants (24%), nuclear power plants (27%) and lignite power plants (36%); a coal phase-out is planned by 2023. In 2017, only 13% of total energy came from renewable sources.

The most important agricultural products are grain, oil crops, potatoes, sugar beets and hops. Viticulture is practiced near Bratislava and sheep are raised in the mountainous regions. Organic farming is becoming increasingly interesting for international market partners.

There is a dense rail and bus network. The Prague – Brno – Bratislava – Budapest motorway is an important part of the transport corridor from Central to Southeastern Europe. There are four major airports.