According to the College Board, there are 23 test centers for SAT and SAT Subject Tests in Mexico. Please note that before you register either of the SAT exams, you should choose your test date and test location. Each testing location is affiliated with an educational institution, such as high school, community college, or university. The following test centers administer one or more of 2019 and 2020 SAT tests in Mexico. 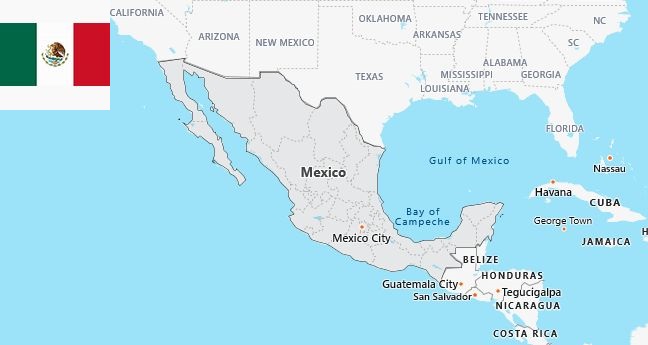 AMER SCH OF FOUND OF GUADALAJARA,AC

Mexico borders the United States to the north and Belize and Guatemala to the southeast.

The state territory of Mexico forms a transition between the North American continent and the Central American land bridge in climatic as well as geological-geomorphological terms. The highland block of northern and central Mexico, narrowing from north to the isthmus of Tehuantepec in the south to a width of just over 200 km, is in the west (Sierra Madre Occidental, up to 3,150 m above sea level) and east (Sierra Madre Oriental, up to 4,056 m above sea level) bordered by mountain ranges, which slope steeply outwards, but inwardly mostly gently merge into the highlands. The southern end is the transcontinental volcanic zone of the Cordillera Neovolcánica (Sierra Volcánica Transversal), which is still volcanic todayis active (Paricutín in Michoacán, El Chichón in Chiapas) and is rocked by earthquakes. Its highest heights include the Citlaltépetl, the highest mountain in the country at 5 700 m above sea level, the Popocatépetl (5 462 m above sea level and the Iztaccíhuatl (5 286 m above sea level)).

The inner highlands are – in continuation of the Basin and Range Province of the USA – divided by numerous isolated mountain ridges into mostly drainless basins (the largest is the Bolsón de Mapimí). While the northern part (Mesa del Norte) isonly sparsely populated due to the drought, the southern, more humid area (Mesa Central) together with the basins in the Cordillera Neovolcánica form the main settlement area of ​​the country (including the basin of the capital Mexico). To the south, the Cordillera Neovolcánica drops steeply to the Gran Valle del Sur, the valley of the Río Balsas, which breaks through the Sierra Madre del Sur to the Pacific in a deep gorge. Beyond the isthmus of Tehuantepec extends the mountainous country of Chiapas; in the north the limestone table of the Yucatán peninsula is in front of it. In contrast to the broad Gulf Coast Plain, a broader plain is only formed on the Pacific in the northwest. By Deltaaufschüttung of Colorado in the drain region of the Gulf of California, the peninsula Baja California have been connected to the Mexican mainland.

The mountain structure of the country, the great north-south extension and the bridge location between North and South America result in an extremely diverse flora. The inner highlands have predominantly thorn bush and succulent formationsin the (larger) northern partwhich change to grassy high-altitude savannas to the south with increasing rainfall. Of the forests in the mountains, those of the Cordillera Neovolcánica have been cleared to a particularly large extent. The Pacific coastal plain to the north of the Río Yaqui – as well as large parts of the Baja California peninsula – is occupied by succulent and thorn bush formations, south of the Río Yaqui by dry forests (heavily cleared) and savannahs, the Gulf Coastal plain in the north (north of 22 ° north latitude) Dry forests and savannahs, in the south of semi-evergreen and deciduous rainforests (large areas cleared for pastureland and appearing as savannas). On the Yucatán peninsula, the thorn bush savannah near the coast is followed by rain-green dry and damp forest and ever-humid tropical rainforest on the edge of the mountain.