According to the College Board, there are 1 test centers for SAT and SAT Subject Tests in Grenada. Please note that before you register either of the SAT exams, you should choose your test date and test location. Each testing location is affiliated with an educational institution, such as high school, community college, or university. The following test centers administer one or more of 2019 and 2020 SAT tests in Grenada. 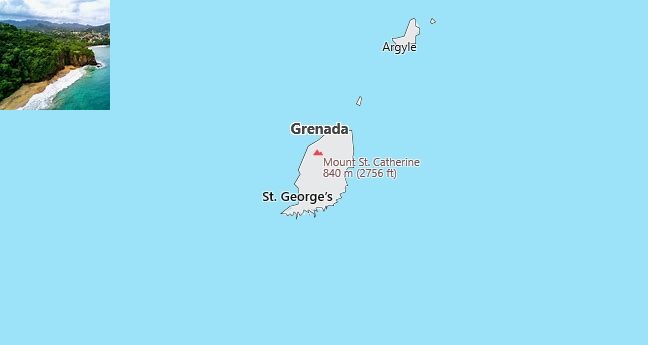 Grenada [ grə ne ɪ də ] State in Central America, in the West Indies. It includes the island of Grenada, which belongs to the Lesser Antilles, and the southern part of the Grenadines archipelago. Around 82% of the predominantly Catholic population are black. Grenada provides a third of the world’s nutmeg production. Cocoa and bananas are also exported. The most important economic sector, however, is tourism, mainly in the south of the main island.

History: The island of Grenada was discovered by Christopher Columbus in 1498. In 1674 it became a French colony, from 1763 it was under British rule. In 1974 Grenada gained independence.

Around 82% of the population are blacks, 13% are mulattos and 3% are descendants of Indian contract workers who were recruited in the 19th century. The majority of the population lives on the main island, 36% (2017) live in cities.

The population has changed only slightly in recent years, as many grenaders left the island in search of work.

The constitution (Article 9) guarantees freedom of religion. According to the latest available calculations, over 85% of the population are Christians: around 36% belong to the Catholic Church (Archdiocese of Castries, suffragan diocese of Saint George’s), approx. 8.5% to the Anglican Church (province of West Indies), almost 28% to various (after-) Reformation religious communities (especially Pentecostals [over 17%], as well as Baptists [around 3%], Methodists, Presbyterians, etc.). Seventh-day Adventists make up a good 13% of the population. There are numerically small minorities of Jehovah’s Witnesses, Rastafarians, Hindus, Muslims, and Baha’is. Almost 6% of the population describe themselves as non-believers.

With the construction of large hotels and the completion of the international airport, tourism has rapidly gained in importance since the 1980s. Tourism is now the main source of income and foreign exchange as well as the largest employer in the island state. In 2014, 374,000 guests (including 235,100 cruise passengers) visited Grenada. Tourist attractions are the old colonial buildings of the capital Saint George’s, beaches in the south of the island, the rainforest interior and the Grenadines.

The main branches of the only moderately developed industry are above all the textile, food and beverage industries. The share of the industrial sector (including mining and construction) in GDP is 15.3% (2016).

The road network covers around 1,100 km, more than half of which is paved. There is no railroad in Grenada. The most important sea port is Saint George’s with a container terminal. The international airport is located in the south of Grenada.

The agricultural sector (including forestry and fisheries) generates 7.3% of the gross domestic product (GDP) (2016) and employs around 11% of all employed people. The tropical climate favors the cultivation of bananas, cocoa, coconut palms, sugar cane and nutmegs. Cinnamon, cloves, ginger and bay leaves are also exported. The own need for food cannot be met.