According to the College Board, there are 1 test centers for SAT and SAT Subject Tests in Fiji. Please note that before you register either of the SAT exams, you should choose your test date and test location. Each testing location is affiliated with an educational institution, such as high school, community college, or university. The following test centers administer one or more of 2019 and 2020 SAT tests in Fiji. 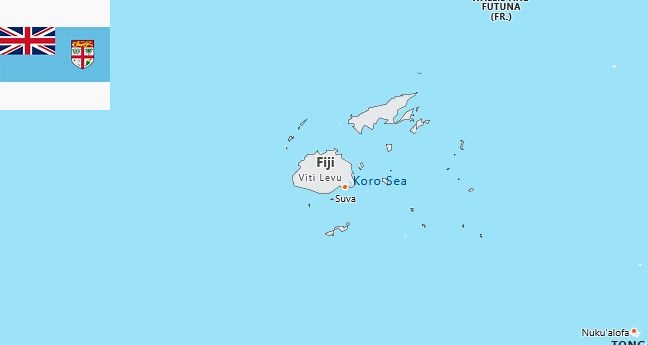 Fiji has one of the most developed economies of the island states of the South Pacific and, with a gross national income (GNI) of (2017) US $ 4,970 per resident, is one of the developing countries with middle income. The most important branches of the economy are tourism and the sugar industry.

Agriculture (including forestry and fishing) is the main industry in large parts of the country, even if its share of gross domestic product (GDP) is only 11.3% (2015). The share of subsistence farming is very high, around 70% of the population, but only 1.9% of the registered labor force is active in the agricultural sector. Taro, cassava, rice, potatoes and corn are grown for personal consumption. The most important crops for export are sugar cane, coconut palms, taro, ginger, pineapple, citrus fruits, tobacco and small amounts of cocoa.

Fisheries: The fishing industry (especially tuna) is of growing importance for the domestic market and for export. In 2014, fishing generated around 7.2% of export income.

The most important natural resources are gold and silver. The largest gold mine is near Vatukuola on Viti Levu. The use of a copper deposit at Namosi on Viti Levu began in 1997. Mineral water is also mined on Viti Levu and mainly exported to the USA.

The most important source of energy is hydropower, which accounts for around 39% of electricity generation. By operating the Monasavu hydropower plant on Viti Levu, which opened in 1983, Fiji was able to reduce its dependence on oil imports by half. 36% of the electricity is generated from fossil fuels, there are numerous local diesel generators. 25% come from renewable energy sources.

Industry and mining generated 18.1% of GDP (2015). The preparation and processing of fishery products, agricultural and forestry products and the manufacture of consumer goods for the domestic market dominate the branch structure. The food industry (especially processing of fish, sugar cane, production of coconut oil, rice mills) is important, as is the wood processing (including export of precious wood as boards and veneers), textile and clothing industries.

An important branch of the economy is international tourism, which, however, repeatedly suffers severe slumps due to the political unrest. The (2015) 744 300 foreign tourists come mainly from Australia, New Zealand and the USA.

The road network (around 3,440 km) on the major islands, inter-island shipping and air traffic (over 20 local airports) are relatively well developed. International airports are Nadi and Nausori. On Viti Levu there is a narrow-gauge railway operated by the sugar company with a track length of around 600 km. The most important mode of transport is shipping, the largest ports are Suva, Lautoka (especially sugar handling) and Levuka (fishing port).

The native Fijians (61.1% of the population) are Melanesians in terms of their ethnic and linguistic affiliation, but culturally close to Polynesia. They are landowners and often still live in traditional communities under village and island chiefs. The second largest group of the population are the Indians with 32.0% (mainly descendants of the sugar cane workers brought into the country by the British in 1879–1916). Traditionally, there have been strong social tensions between the two population groups. There are also minorities of Europeans and Chinese. Rotuma has an exclusively Polynesian population. The average population density is 50 residents / km 2. The share of the urban population is 54% (2017). By far the largest agglomeration is Suva.

The constitution guarantees freedom of religion and follows the principle of the separation of state and religion, emphasizing that “the people recognize that worship and reverence for God are the source of their work and leadership for the government”.

More than 64% of the population profess Christianity. 45% of the population belong to Protestant churches (especially Methodists [almost 35%] and Pentecostals), around 9% to the Catholic Church (Archdiocese of Suva) and 0.8% to the Anglicans; other Christian denominations together make up a good 10% of the population. Significant non-Christian religious groups are Hindus (28%) and Muslims (around 6%). The religious minorities include Bahais, Sikhs and Jews.