According to the College Board, there are 1 test centers for SAT and SAT Subject Tests in Burundi. Please note that before you register either of the SAT exams, you should choose your test date and test location. Each testing location is affiliated with an educational institution, such as high school, community college, or university. The following test centers administer one or more of 2019 and 2020 SAT tests in Burundi. 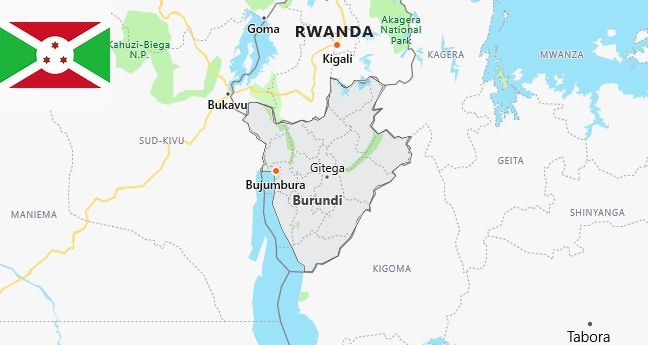 Burundi is located between the Democratic Republic of the Congo, Tanzania and Rwanda in the East African inter- lake region, at the northeast end of Lake Tanganyika. It mainly comprises a savannah highlands at 1,400–1,800 m above sea level (cheap arable and pasture land); to the west, Burundi also has a share in the Central African Rift and a peripheral mountain range that rises to over 2,600 m above sea level.

Burundi is located in the humid tropics and has two rainy seasons (September – December, February – May). The temperatures, generally moderated by the altitude, only reach high values ​​in the trench depression on Lake Tanganyika and on the Rusisi River, which is about 800 m above sea level (annual average: almost 24 ° C).

Burundi is one of the smallest but most densely populated (423 residents / km 2) countries in Africa. The largest group of the population with a share of around 86% are the Hutu, a traditionally arable Bantu people. 13% belong to the Hima (Tutsi) pastoral people. Their dominance in business and politics is considered to be one of the causes of the violent conflict between the two ethnic groups.

A small minority are the Twa (Pygmies). There are also some Europeans (especially Belgians) and Asians living in Burundi. At the end of 2017, 439,300 Burunders were refugees abroad. The majority of the population lives in scattered rural settlements and practices traditional agriculture. The degree of urbanization is low at 13%. The biggest cities are Bujumbura and Gitega.

The biggest cities in Burundi

Social: Around two thirds of the population live below the poverty line. Medical care is inadequate. 1.04% of adults (age group 15 to 49 years) are infected with HIV.

The constitution guarantees religious freedom and obliges the state to religious neutrality and parity. Traditionally, however, the Catholic Church, as the largest religious community, exerts a strong influence on public life. Since there are no reliable statistics, only estimates or information provided by individual religious groups can be used. The information is accordingly vague. According to this, between 60 and 65% of the population belong to the Catholic Church (two archbishoprics [Bujumbura, Gitega] with six suffragan dioceses), between 15 and 26% various Protestant churches and communities (especially Adventists, Pentecostals, Methodists) and around 8% of the Anglican Church (ecclesiastical province of Burundi).

Between about 6 and 20% of the population are followers of indigenous African religions (often with simultaneous membership in Christian churches). Another religious minority are the predominantly Sunni Muslims (between 2 and 5% of the population; center in Bujumbura).

The constitution, approved by referendum on February 28, 2005, defines Burundi as a presidential republic and establishes the separation of powers, a multi-party system and basic human and civil rights. Since a constitutional amendment in 2018, the head of state has been the president, elected by the people for 7 years (re-election possible), assisted by a vice-president and a prime minister. The legislature lies with the bicameral parliament (legislative period 5 years), consisting of a national assembly (100 members, 60% of the mandates are reserved for the Hutu, 40% for the Tutsi (Hima); in addition, 3 mandates are given to representatives of the Twa – People assigned) and Senate (41 members, including 34 indirectly elected senators, 3 representatives of the Twa and the former presidents; equal distribution of mandates between Hutu and Tutsi). At least 30% of the seats in both chambers are reserved for women.

The total strength of the volunteer army ruled by the Tutsi (almost exclusively army troops) is around 20,000 men, which is divided into seven infantry battalions and several combat support units and units. The air force has around 200 men, the paramilitary forces over 1,000 gendarmerie men and around 30,000 members of local militias.