According to the College Board, there are 2 test centers for SAT and SAT Subject Tests in Bosnia and Herzegovina. Please note that before you register either of the SAT exams, you should choose your test date and test location. Each testing location is affiliated with an educational institution, such as high school, community college, or university. The following test centers administer one or more of 2019 and 2020 SAT tests in Bosnia and Herzegovina. 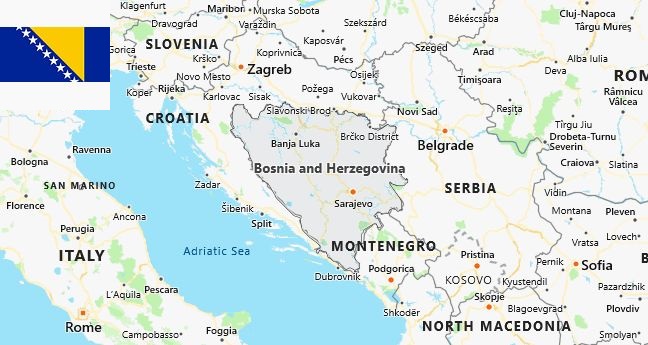 More about Bosnia and Herzegovina

According to the constitutional principles set out in the Dayton Peace Agreement (Annex 4), Bosnia and Herzegovina is an independent, democratic, federal republic, consisting of two relatively independent territorial units (entities), the Bosniak-Croatian Federation of Bosnia and Herzegovina (abbreviation FBiH) and the Serbian Republic (Republika Srpska, abbreviation RS). For the district of Brčko, located between the western and eastern parts of the RS, a statute of 1999 created the status of a condominium belonging to both entities with its own institutions and competencies.

The central authority is primarily responsible for foreign, foreign trade, customs, currency and monetary policy (common currency, establishment of a central bank) as well as questions of citizenship and immigration and consists of the following organs: At the head of the state as a whole there is a three-member collective state presidency ( one Bosniak, one Croat and one Serb), which is directly elected in a ratio of 2: 1 by the population of the FBiH and the population of the RS for 4 years. A rotation principle applies to the chairmanship (change every 8 months); first of all, the candidate who has won the most votes takes the chair. The State Presidium represents the state as a whole in international bodies, is responsible for foreign policy and submits the annual budget to parliament. The legislature lies with the bicameral parliament (legislative period 4 years), consisting of the directly elected (proportional representation; no blocking clause) House of Representatives (42 MPs, 28 of them from the FBiH and 14 from the RS) and the Chamber of Nations (with equal numbers of 5 Bosniaks, Croats and Serbs occupied). The 15 members of the second chamber are not elected directly, but are appointed by the parliaments of the two entities (10 come from the FBiH and 5 from the RS). The head of government is proposed by the chairman of the state presidency; it appoints the members of the cabinet (Council of Ministers) who are to be confirmed by the House of Representatives. The constitutional court of the state as a whole, which is also responsible for mediating conflicts between the state as a whole and the territorial units, monitors compliance with the constitutional principles. Of its 9 members, 4 are appointed by the FBiH parliament (2 Bosniaks and 2 Croatians each), 2 by the RS parliament and 3 by the European Court of Human Rights. A state court has existed since 2002, which maintains criminal, administrative and appeal chambers as well as senates for organized crime, white-collar crime and corruption. Recently there has also been a Ministry of Justice and a Public Prosecutor’s Office at the central government level. A high representative of the international community, who has extensive powers, monitors compliance with the constitutional principles and controls the institutions at the various levels. Among other things, he can dismiss elected officials without giving reasons and repeal laws enacted by the local legislature. Check petwithsupplies to see Bosnia and Herzegovina Travel Guide.

In the Bosniak-Croatian Federation of Bosnia and Herzegovina In addition to the House of Representatives (99 members), which is directly elected for 4 years, there is also a Chamber of Nations (58 members, including 17 Bosniaks, Croats and Serbs), appointed on an equal footing by the cantonal parliaments. The President and his two deputies are elected by the House of Representatives for 4 years and must represent the three constitutive ethnic groups (Bosniaks, Croats and Serbs); the offices rotate. The government (8 Bosniaks, 5 Croats and 3 Serbs) chaired by the Prime Minister is appointed by Parliament. The 10 cantons of the FBiH (5 Bosniak, 3 Croatian and 2 mixed) elect their own parliaments (legislative period 4 years) and have the mandate to adopt regional constitutions and to appoint governors.

In the Serbian Republic, the president and the two vice-presidents (each must belong to a different ethnic group; the offices do not rotate) are directly elected for 4 years; The legislative body is a bicameral parliament (legislative period of 4 years), consisting of the people’s assembly (83 members; each constitutive ethnic group must be represented with at least 4 seats) and the Chamber of Nations (which has existed since 2002) (28 members, 8 of which are Serbs and Bosniaks each) and Croats as well as 4 members of other ethnic groups). In the government, too, the constitutive and other ethnic groups must be represented according to a certain key.