With the change of power from President Mandela to Mbeki, the controversies between the ANC, SACP and the trade union confederation COSATU intensified. Like the SACP, COSATU also supported Zuma in his power struggle with Mbeki. As president, Zuma rejected a reorientation in economic policy. Despite all criticism, the COSATU remained loyal to the ruling party, but the COSATU leadership was torn between loyalty to the ANC and insistence on independence. In some South African media reports and comments, new union formations or mergers were thought possible. The new trade union confederation SAFTU was founded in 2017.

The increase in importance of the Association of Mineworkers and Construction Union (AMCU) before and after the Marikana massacre in August 2012 also influenced COSATU. In the context of the election campaign for the 2014 parliamentary elections, the metalworkers’ union NUMSA, which is very influential in COSATU, questioned its support for the ruling party ANC. At the beginning of November 2014, NUMSA was excluded from COSATU. Without the strong organizational base of COSATU as a whole, the mobilization potential of the ANC would be weaker. While the COSATU criticized his approach and corruption during the Zuma presidency, new forms of dialogue emerged in May 2019 under Ramphosa.

A corruption affair sparked the first major crisis in the ruling party in 2005. The then Vice President Jacob Zuma was brought to court on suspicion of corruption; He is said to have accepted bribes when the government in Europe bought arms. The arms deal decided in 1998 with arms contracts worth almost five million euros at the time, in which German companies were also involved, was itself the subject of public criticism.

Despite the corruption lawsuit and a rape trial in 2006, which ended with Zuma’s acquittal, he prevailed in the power struggle to succeed Thabo Mbeki thanks to the support of the left-wing camp in the ANC. He was elected the new ANC president at the 52nd party conference of the ANC in Polokwane in December 2007 with 60 percent of the vote.

Jacob Zuma was assessed very differently in South Africa, a major country in African continent according to ethnicityology: for some he was a traditionalist close to the people, for others a populist. Zuma was again ANC chairman at the ANC party conference in 2012. The new party vice was the former trade unionist and multimillionaire Cyril Ramaphosa, who was given a good chance of becoming Zuma’s successor. That happened in mid-February 2018.

Zuma and his supporters had meanwhile won the power struggle in the ANC, most recently in October and November 2016. Power issues between factions in the ANC as the ruling party also shaped the political controversies in the first half of 2017, including the role of the president in relation to the Industrial family Gupta and their influence on the government – called “State Capture” and scandalized – which was also criticized by important opposition parties. With the development in the ANCFor example, South African political discussion forums deal with each other, sometimes as dialogue partners in cooperation with German political foundations. At the ANC party conference in mid-December 2017, Cyril Ramaphosa was elected as Zuma’s successor to the office of party chairman. The factional struggles in the ANC were also fought in the personnel decisions about the chairmanship of various parliamentary committees in June 2019: Supporters and favorites of the former President Jacob Zuma were successfully proposed by the ANC General Secretary Ace Magashule. The ANC’s internal power conflicts also have an impact on the controversies about the so-called Zondo Commission, something with regard to the statements of the former president Jacob Zuma. In addition, the action taken by the current ombudsman Busisiwe Mkhwebane against Finance Minister Pravin Gordhan is seen in the context of the ANC’s internal power conflicts. 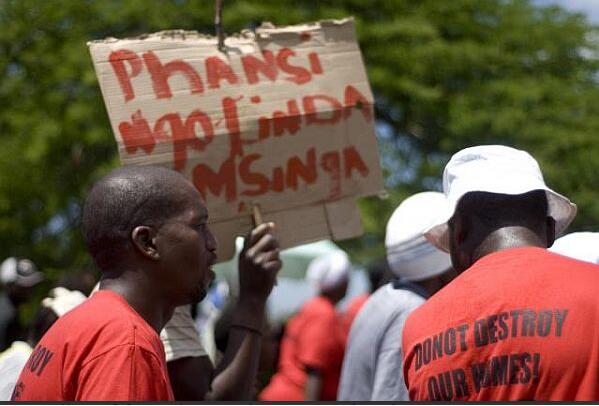 Protest against the evacuation of settlements in November 2008 in Siyanda

At the local level, a culture of protest has developed, especially in the impoverished townships, which often ties in with experiences from the struggle against apartheid. With payment boycotts, local initiatives and protest forums, which are now considered a social movement nationwide, are fighting against the privatization of water and electricity supplies. On April 30, 2008, residents of the Phiri district of Soweto successfully tried their right to water in the Johannesburg Supreme Court. The compulsory introduction of the so-called prepaid systems in the slums is unconstitutional according to the verdict. Protests over the problematic water supply have also taken place in other parts of the country in recent years. Quite a few people fear social decline and therefore take part in strikes.

There are also increasing protests against the evictions of slums (especially in squatter camps), which are all too reminiscent of the notorious policy of forced resettlement under the apartheid regime. The movement of Durban’s Shack Dweller settlements, Abahlalibase Mjondolo, has been particularly active with boycott campaigns under the motto “No Land, No House, No Vote”. The Western Cape Anti-Eviction Campaign also reports on evictions in the Western Cape. Such land and house fights, as well as disputes between township residents and the authorities, become sharper the longer the state services are not available, which is often due to corruption.

With mass protests in the country’s major cities, South African citizens reacted to the dismissal of the nationally and internationally respected former Minister of Finance Pravin Gordhan and partial cabinet reshuffles. Many called for the resignation of President Jacob Zuma, especially since they feared, among other things, further massive economic problems.