Morocco is on the way from an agricultural country to a service and industrial society, with industrialization encountering many obstacles. The palace and the financial and economic elites pursue a pragmatic line characterized by so-called neoliberalism, with a mix of free market economy, moderate regulation, strengthening of the domestic economy and connection to the world market. A central aspect is the cooperation with the European Union, especially with France and Spain. Other important axes are cooperation with the Arab Gulf States and the expansion of economic relations in West and Central Africa.

According to franciscogardening, two fifths of Moroccan workers still find work in agriculture and fishing, with these sectors producing less than one sixth of GDP. Agriculture, phosphate mining, tourism and the processing textile and food industries have been pillars of the Moroccan economy for decades.

Phosphate export is an important economic factor in Morocco. The country ranks first in the world in terms of deposits, with around 70% of the world’s phosphate ore reserves. A small but considerable part of these deposits is in the Western Sahara. How far Morocco can actually benefit from these resources is unclear. The fact is that Morocco is currently lagging behind its possibilities with phosphate. Exports are below average, prices fluctuate widely and mostly swing downwards.

Morocco is currently endeavoring to use its geographical location advantages and to establish itself as an industrial location as well as a logistical hub for trade between Europe and Africa. It is based on extensive plans for the development of the key sectors mobility and transport, wind energy, solar energy, infrastructure, agriculture, and tourism. The strategy includes the further expansion of the energy sector as well as the road and rail network, the rail sector (Rail Maroc 2040) as well as the further expansion of the deep-sea port Tanger-Med near Ksar Sghir, east of Tangier. France plays a central role in the railway sector.

A key strategic goal is to reduce dependency on energy imports. At the moment Morocco has to cover almost all of its energy needs through imports due to a lack of its own raw materials. By 2030, the expansion of renewable energies (wind, sun) not only wants to reduce energy imports: Morocco also wants to export electricity. At the same time, work is being carried out to reduce domestic electricity consumption by increasing energy efficiency.

According to the IAEA, Morocco plans to start generating electricity from nuclear energy after 2030. So far there is only one research reactor in Morocco, in the Maamora region near Rabat. In recent years, Moroccan media reported that a nuclear power plant was to be built near Sidi Boulbra (near Essaouira). However, the Moroccan government has not yet confirmed these plans.

Morocco needs well-trained professionals to increase its economic power. So far, there are too few young people who have completed vocational training and university degrees that are compatible with the job market. Morocco relies primarily on private educational institutions, sometimes in the form of international cooperation, such as the UIC in Casablanca or the UIR in Rabat. 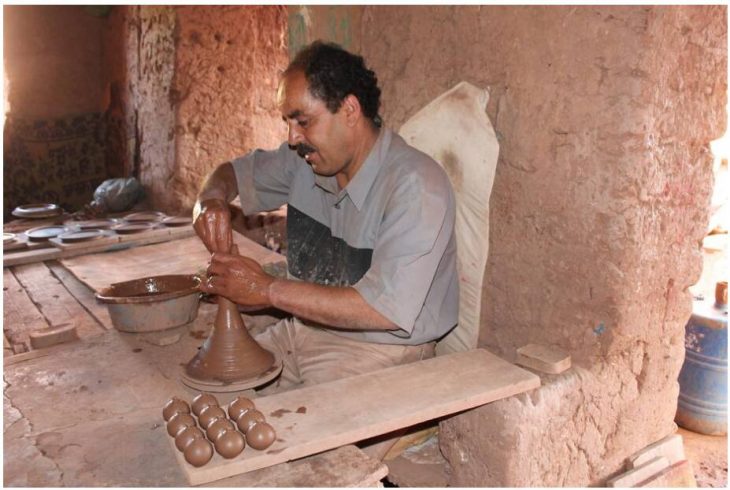 Morocco is focusing on the countries in sub-Saharan Africa, both as potential markets (especially for fertilizers) and with a view to important raw materials. With its flagship OCP Afrique, Morocco would like to sell know-how in raw material extraction as well as gain access to key raw materials.

Due to the increasing integration of Morocco into the world market, trade with Morocco has in some cases become easier in recent years. The Morocco office of the German Chamber of Commerce and Industry (AHK) in Casablanca is responsible for promoting German-Moroccan trade relations. Business delegations and information exchange are organized by the Hamburg-based European-Mediterranean-Arab country association EMA, which operates the so-called German Business Center in Casablanca.

Despite the political problems, Morocco sources gas from neighboring Algeria; this is done in exchange for usage rights for the Maghrebian gas pipeline, which leads from Algeria via Morocco to Spain.

However, direct trade with the neighboring country is severely restricted due to the closure of the land border. In the northeast – near Oujda – the so-called “green border” blooms. Smuggling, especially petrol and food, but also drugs, and occasionally humans. The Algerian-Moroccan border near Oujda is one of the migration and escape routes in the western Mediterranean that are sometimes more, sometimes less frequented.

The ARTE documentation is about the origin and the economic potential of argan oil, which in Morocco is traditionally not used for food, but as a preventive and cure for diseases.