According to businesscarriers, Morocco is called in Arabic “Al Maghrib” (“The Maghreb”) or “Al Mamlaka Al Maghribiya” (The Maghreb Kingdom, formerly also “the Sherif Kingdom”). The name “Morocco” is derived from the city of Marrakech. Morocco has been independent since 1956 and, according to the constitution, is a constitutional monarchy.

Traces of human life up to 20,000 years old have been found in Taforalt near Oujda and in Tétouan. The German Archaeological Institute is researching in collaboration with the Institut National des Sciences de l’Archéologie et du Patrimoine (Rabat) the settlement of the coasts of today’s Morocco at the time of the Early Neolithic (approx. 5000 BC).

From around 1000 BC Phoenicians and Carthaginians founded trading establishments on the Mediterranean and the Atlantic: Among others, Tingi, today’s Tangier, and Lixus, near today’s city of Larache. The Phoenicians traded in ores and purple, among other things. In the 4th century BC, the Berber kingdom “Mauritania” arose in North Africa in the area of today’s Morocco and Algeria.

The Romans conquered North Africa in the 2nd century BC. Mauretania Tingitania became a granary, supplier of raw materials and a vassal of the Roman Empire. During the more than 400-year presence of the Romans in North Africa, numerous new settlements emerged on what is now Moroccan territory, including Sala, Oppidum Novum (Ksar Kbir) and Volubilis (then up to 10,000 residents). Only a small part of the population adopted Christianity as a religion.

After the Roman division, Mauretania Tingitana fell to the Western Roman Empire. In 429 AD, the Vandals from Northern Europe invaded the coasts of North Africa. Their advance remains essentially limited to the coastal regions, they hardly penetrate inland. From AD 533, the coastal areas of North Africa and southern Spain become part of the Byzantine Empire. After the death of the Prophet Muhammad in 632 AD, Arab fighters conquered from 649 AD. the Maghreb, first the area of today’s Tunisia and Algeria, then the areas beyond the Middle and High Atlas. In the area of what is now Morocco, the first foray into the Atlantic was made in 681/682. Around 703, the Syrian-born general Musa Bin Nusair marched into Tangier and the southern Souss region. Omayyads incorporated into Damascus. There was increasing resistance to the new Arab rulers. The locals accepted the new religion relatively quickly and Islamized themselves. But some of the Berber leaders were not ready to submit to the political and cultural dictates of Damascus. Instead, they adopted the Kharidjite doctrine and established independent domains. In 750 AD it became the Omayyad Caliphate overthrown in Damascus. The last caliph of Damascus fled to Cordoba, Spain. The new power center of the Islamic world was from now on in Baghdad (Abbasid dynasty). Around 758, the Zenata Berbers from Tafilalet founded the emirate of Sijilmassa. The rulers of Sijilmassa had close trade relations with the then empire of Ghana and with various regions in West Africa.

In 789, a descendant of Ali, Muhammad’s son-in-law, fled from the Abbasids in Baghdad to northwest Africa. The Shiite Idriss I founded the city of Fès and the first Moroccan empire, which at that time stretched from northeastern Tlemcen (today western Algeria) to the southwestern Souss region (near Taroudant). Idriss I. is credited with making significant progress in the Islamization of Morocco. The so-called Idrissids had the Qaraouiyine University built in Fez, at that time one of the great centers of learning in the Islamic world.

From the 11th century onwards, various Berber dynasties or associations of tribal associations took control of what is now Morocco. From 1055-1147 the Almoravids (Al-Murabitun) with the capital Marrakech, from 1130-1548 the Almohads (Al-Muwahhidun), Merinids (Banu Marin) and Wattasids (Banu Wattas).

In 1415, Portugal captured the Mediterranean city of Ceuta (which is now part of Spain). As a result, the Portuguese settled in Tangier (and after them the British). In 1471 further Portuguese colonies were founded on the Atlantic, including Mogador (Essaouira) and Agadir (1505).

In 1492 Christian armies conquered the Arab kingdom of Granada and with it the last Arab bastion in Spain during the “Reconquista”. The expulsion of Jews and Muslims begins. By 1611, an estimated 200,000 Jews and around 300,000 Muslims (Morisks, Mudejares) left the Iberian Peninsula. Many flee to North Africa. In Morocco, refugees from Andalusia mainly settle in Tetouan, Chaouen and Fès.

In 1497 Spain conquered the enclave of Melilla. Various religious brotherhoods, local leaders and tribes, including the Wattasids (Banu Wattas) and the Saadians (1549-1659) in Marrakech, fought for power in Morocco in the 15th century. Then the Alawids (1659-today) from Tafilalet take the lead. 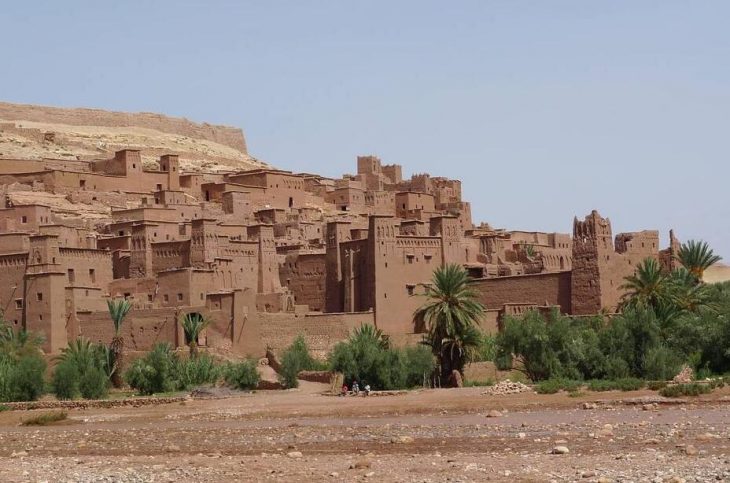