Social protests against exploitation, injustice and political arbitrariness have occurred again and again in Morocco since independence. In the 1960’s and 1970’s, student protests were stifled with massive violence, thousands of mostly young people were arrested and tortured. In the 1980’s the so-called “bread revolts” broke out. In 1991 the population protested on a large scale against the second Gulf War, with which the US forced Iraq to withdraw from Kuwait. In the 2000’s, among others, the “unemployed academics” regularly took to the streets and demanded jobs in the public sector. What is remarkable from an external point of view is the fact that protests in Morocco rarely attack the monarchy. The narrative is that the king actually wants the right thing that he was surrounded by blocking forces. This dynamic is illustrated, among other things, in the documentary “Landless Moroccans “visible. 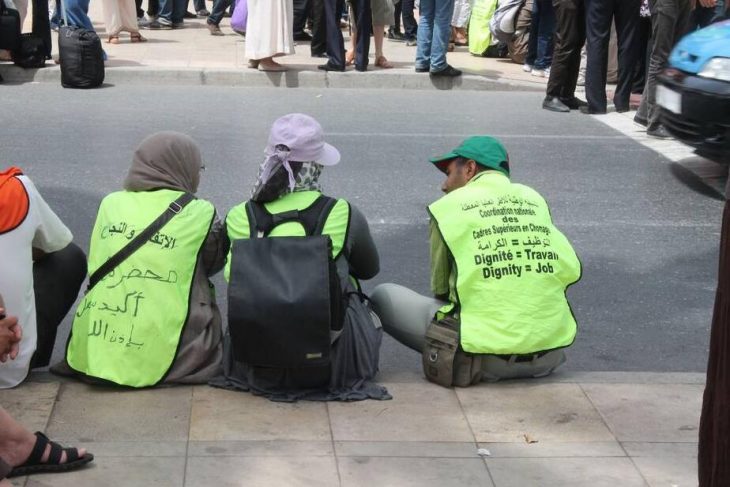 On October 28, 2016, the fishmonger Mouhcine Fikri was killed in a dispute with the local police in the northern Moroccan city of Alhoceima. After the police confiscated the man’s goods and threw them on a garbage truck, the 31-year-old jumped on the garbage truck to retrieve his belongings. He was crushed by the mobile garbage press and died. It could not be clarified whether there was an oversight or intent. Immediately after Fikri’s funeral on October 30, 2020, massive protests began, both in northern Morocco and in other cities such as Casablanca, Rabat, Meknes. The demonstrations resulted in a mass movement (Hirak) that lasted for months. The demonstrators demanded, among other things:

The Hirak movement repeatedly brought thousands of people to the streets until June 2017, similar to 2011. The state responded with military force and arrests. Numerous activists, but also media people, received long prison sentences. Journalist Hamid Mahdaoui was sentenced to 3 years in prison in 2017, spent over 400 days in solitary confinement and was released in July 2020. Nasser Zefzafi, leader of the movement, and numerous other activists were sentenced to 20 years in prison in 2018 in a controversial mass trial for alleged conspiracy against the state. Some convicts were pardoned, but not Zefzafi, he is still in prison.

According to estatelearning, among the Islamist actors in Moroccan domestic politics, two should be particularly emphasized at the moment:

1) The “Justice and Development Party” PJD, led by Abdelilah Benkirane. The PJD has been in parliament since 1997, in government since 2012 and is increasingly pragmatic. Critical political analyzes indicate that the actual power of the PJD is limited and that participation in government could damage the credibility of the PJD.

2) The Movement for Justice and welfare, since the end of 2012 under leadership of Muhammad Abbadi. The founder, the former teacher and Sufi mystic Abdessalam Yassine, who died in December 2012, was under house arrest for years because of his fundamental criticism of the Moroccan royal family. Yassine’s argument: Islam has no hereditary monarchy.

In the run-up to the 2016 parliamentary elections, the PJD came under heavy criticism because two leading members allegedly violated public order and moral standards. The scandal led to the expulsion of those affected from the party. In the subsequent election, the PJD was able to slightly improve its results despite the scandal.

The exact number of violent radical Islamists in Morocco is not known. According to media reports and various studies, at least 1,500 Moroccans are said to be fighting in Syria and Iraq, and more than 200 returnees from Syria are currently imprisoned. The king and state institutions try to remove the breeding ground from the jihadist recruitment attempts by means of targeted security, religious and social policy measures.

According to UNAIDS, between 22,000 and 28,000 people suffering from AIDS lived in Morocco in 2016. The number of those actually infected was estimated by journalists at more than 30,000 in 2019. Most of those infected live in Marrakech or Agadir and the surrounding area. This puts Morocco in a leading position in the MENA region. Almost 50 percent of those infected are female. Prostitutes and homosexuals are affected more than average.

Thanks to the great commitment of civil society organizations and the proactive policy of the state, the number of new infections and new cases is falling. The committed doctor and human rights activist Hakima Himmich founded an independent organization to fight HIV AIDS in the early 1990’s. The ALCS operates active prevention (among other things by distributing condoms) and it provides important support for AIDS sufferers by collecting funds for medication and research. In addition, the ALCS is an important actor for human rights and democratization in Morocco.