Spain had been a colonial power in Western Sahara since the end of the 19th century. Morocco and the Sahrawis themselves opposed this, with different political goals. Since 1965, the UN has officially requested the decolonization of Western Sahara. In 1967 Spain announced a referendum on future sovereignty, but this was repeatedly postponed.

In 1973 the FRente POLISARIO was founded. (Frente Popular para la Liberación de Saquia al Hamra y Rio de Oro). The aim of the organization was the armed struggle for independence from Spain and Morocco. In 1974 King Hassan II asked the United Nations to join the Western Sahara without a referendum. The UN refused and referred the matter to the International Court of Justice. One year later (1975) he rejected the annexation without a referendum.

After the death of the Spanish dictator General Francisco Franco in 1975, Spain decided to give up the Western Sahara. Before Spain had even started to implement the resolution, King Hassan II called on the Moroccans to join the so-called Green March. On November 6, 1975, it is estimated that over 350,000 Moroccans made their way to the Western Sahara. November 6th is a national holiday today.

On February 26, 1976, Spain officially withdrew from Western Sahara. The Sahrawi Resistance in exile proclaimed the Sahara Democratic Arab Republic (DARS). The seat of the Sahrawi government in exile was in southwest Algeria, near the Tindouf military base, not far from the Moroccan border. Morocco did not recognize the DARS, but annexed the part of Western Sahara that it had administered since autumn 1975.

Due to massive bombardment by the Moroccan army, an estimated 80,000 people fled the Western Sahara in the direction of Algeria. Some of the refugees and their descendants now live in four refugee camps in an area near Tindouf that the Algerian government has made available to the DARS. The area is the Hammada desert, a stony, waterless, barren plain. Many Sahrawi refugees have now left the camps near Tindouf and settled in Algeria or in European countries, especially in Spain, France and Italy.

In 1979 the war between the Polisario and Mauritania ended. Morocco annexed the part of Western Sahara that had previously been under Mauritania. Thereupon began a war of attrition between Morocco and the Polisario, which was waged with varying intensity and lasted until 1991.

According to extrareference, in 1981 Morocco began to build a 2500 km long barrier from the Mauritanian-Moroccan border through the Sahara to the Moroccan-Algerian-Sahrawi border triangle.

In 1991 the fighting between the Polisario Front and Morocco ended. The UN installed the MINURSO to maintain peace.

Another referendum was scheduled for 1992, but this referendum has not yet taken place. The mandate of the Minurso has been extended again and again by the UN Security Council to this day. The approximately 500 employees of MINURSO – most of them military observers – cost the international community an estimated 50 million euros annually.

Since November 2010 there have been several attempts for new talks between Morocco and the Polisario, but a solution to the conflict is currently not in sight. Negotiations have been on hold since 2012.

It is true that Algeria has intensified its cooperation with the EU, the USA and NATO in recent years and has only limited interest in a permanent conflict with pro-western Morocco. On the other hand, the Western Sahara remains a trump card for Algeria in regional power poker.

Meanwhile, Morocco is diplomatically active in all directions. A judgment of the European Court of 2018, according to which fisheries agreement with Morocco for Western Sahara should not apply is, in practice not implemented. Morocco is also successfully mobilizing support in Africa. Several countries have opened diplomatic missions in Western Sahara, which further increases the pressure on the Polisario government in Sahara.

The Sahrawis, on the other hand, have less and less leeway. The number of states that recognize the Sahrawi government in exile has fallen from 80 to a good half. Around 100,000 people still live in the camps near Tindouf without any prospects. They urgently need a political solution. Meanwhile, violent riots with injuries and deaths are becoming more and more frequent in the Moroccan controlled part, where there are around 350,000 Moroccans and 150,000 Sahrawis. This also raises the question of the extent to which Morocco can be classified as a safe country of origin.

The death of long-time DARS President Mohamed Abdel Aziz on May 31, 2016 did not fundamentally change the overall situation. Mohamed Abdel Aziz was seen as a moderate, secular nationalist who relied on diplomacy and negotiations rather than armed struggle. Brahim Ghali was elected as his successor on July 9, 2016.

Western Sahara special envoy of the UN was the former German Federal President Horst Köhler from August 2017 to May 2019. The Berlin Center for International Peace Operations provides information on ongoing developments online. 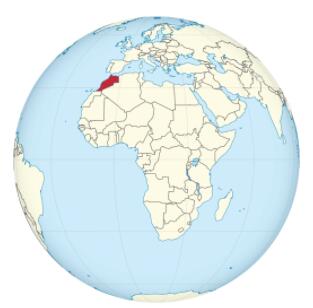