The Mexican economy has achieved a fairly high level of macroeconomic stability over the past 30 years, but economic growth did not exceed 3% in the same period and has recently stagnated. Industrial production in the north of the country is closely linked to the US economy. Mexico was able to successfully shift its exports from petroleum to industrial products. However, a third of the public revenues still come from the oil industry and are therefore the second most important source of income after the remittances of Mexicans living in the USA (remesas). The tourism industry also plays a major role as an economic factor, with revenues falling in recent years due to crime in the country. Due to the COVID-19 pandemic, the tourism industry has suffered particularly severe losses. The Mexican oil industry has already suffered from the corona crisis, as global market demand fell sharply.

Ex-President Enrique Peña Nieto announced a far-reaching reform package after taking office, which he tried to implement with the support of all parties. The so-called ” Pacto por México” (signed by representatives of the larger parties on December 2, 2012) included, as important economic reforms, the increase in competitiveness through the liberalization of markets, growth and the creation of jobs. Other political goals included fiscal reform, reform of the education system and the fight against corruption.

The pact was heavily criticized by many intellectuals and social organizations. Among other things, because it was signed and adopted without a consensus from important social groups. For example, the so-called ” educational reform ” in the southern, impoverished states met with great opposition from the population. Protests, combined with vigils, road and sometimes also motorway closures, caused high economic costs. Peña Nieto’s reform was abolished in 2019 by López Obrador, with the aim of making education accessible to all sections of the population.

The goal of fighting corruption has not been achieved to this day. Several governors are suspected of having enriched themselves through their offices. Ex-President Enrique Peña Nieto was also repeatedly involved in real estate and corruption scandals. The economic costs of corruption are high and damage the country’s development. It is estimated that corruption costs the country around 10% of GDP.

As early as the mid-1980’s, the deregulation and privatization of companies and banks were at the core of the structural change towards an export-oriented economy. World market integration went hand in hand with strong economic and social polarization, as only a few sectors and regions were able to contribute to economic growth. While the service sector now generates 62% of GDP and employs 58% of the working population, the agricultural sector only contributes 3.5% to GDP, but still creates 18% of jobs.

Mexico suffered from economic crises in the 1970’s and 1980’s due to its dependence on oil and its price development on the world market. For this reason it has been of high importance for neoliberal economic policy since 1982 to promote diversified industrialization. The extraction of metals and mineral raw materials and the production of food and beverages, vehicles and textiles (maquila industry) today generate 35% of GDP. The development of an export country was strengthened with the free trade agreement between Canada, USA and Mexico (NAFTA). The concentration of exports in a few companies remains problematic: of approx. 3 million companies, only approx. 7,000 export.

Despite various efforts to diversify energy production, the dependence on oil is still very strong. This dependency has serious repercussions for the entire economy, especially in times of falling oil prices. Dams and reservoirs are currently being planned, but the population’s distrust of such projects is considerable. The expansion of renewable energies has great potential. 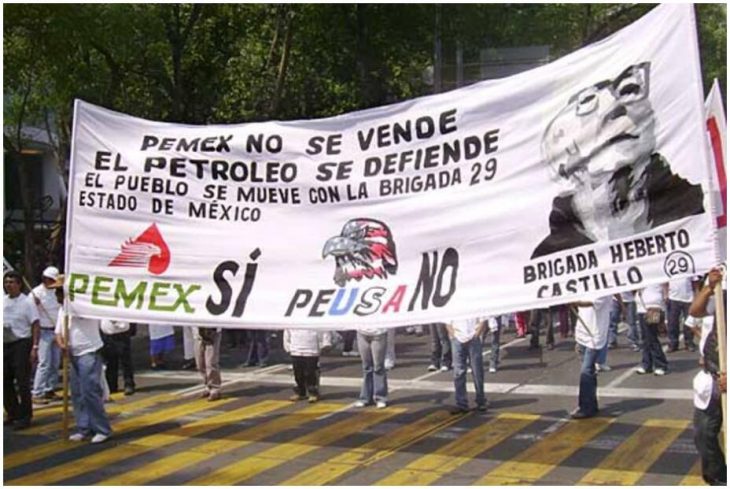 Demonstration against the privatization of the state oil company Pemex

The growing interdependence with the USA at the trade level is of central importance for the development of the Mexican economy. Since NAFTA came into force in 1994, the Mexican economy has geared its production to the needs of North American countries according to globalsciencellc. The US takes 80% of Mexican exports. Where oil was once the top priority, remittances from Mexicans living in the USA are now the most important source of income for Mexico. An agreement on free movement of workers is not in sight.

The more than 12 free trade agreements that Mexico has signed with 45 countries around the world make the country very interesting for international investors. Mexico has also signed several trade agreements with other Latin American countries (including bilateral agreements with Argentina, Bolivia, Chile, Costa Rica, Ecuador, Colombia, Nicaragua and Peru, and multilateral alliances with Colombia and Venezuela on the one hand and with Guatemala, Honduras and El Salvador on the other). Mexico uses its position as the third largest economy in Latin America to promote regional networking (see: the signing of the CELAC).

Outside the American continent there are agreements with alliances and associations of states, such as the global agreement with the EU. This came into force in 2000 and goes far beyond regulating trade relations by dealing with issues of cooperation and political cooperation. There is also a trade agreement with the European Free Trade Association, which came into force in 2001, as well as bilateral agreements with Israel and Japan.