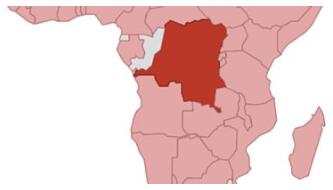 Democratic Republic of the Congo Location

TV programs are the central medium in urban areas, while radio determines communication in rural areas. The media landscape is changing rapidly in the country. In Kinshasa, Lubumbashi and Goma in particular, local commercial radio stations as well as small newspapers and information sheets are emerging and disappearing.

Freedom of the press in the DR Congo is guaranteed by the constitution and related legislation. In political practice, however, independent bodies report that the law is bent and information is manipulated.

The state press agency ACP (Agence Congolaise de Presse) has existed since 1960, and was founded by the country’s first Prime Minister, Patrice Lumumba.

” Reporters Without Borders ” refers to the manifold violations of the freedom of the press. In the international ranking of press freedom, the Democratic Republic of the Congo is ranked 150th out of 180 (2020). In its last report, Reporters Without Borders found that the legal system is not only extremely repressive, but that the judges are often ignorant of the current press laws.

In general, the press freedom situation in the Democratic Republic of the Congo has deteriorated in recent years. Constant attacks on journalists, publication bans and the confiscation of unwanted media are the order of the day. Local journalists work under difficult conditions, especially in the interior of the country and in the provincial capitals. Judicial institutions and local army leaders deal with the local press in a high-handed manner.

The country’s print media suffer from inadequate infrastructure and low circulation. Due to a lack of financial means and technical possibilities, the distribution channels of the newspapers are very limited and concentrate on the big cities and especially on the capital Kinshasa. Up to 200 newspapers appear here as daily, weekly or monthly newspapers, including Courrier International / Le Potentiel, L’Avenir, Le Palmarès, L’Observateur, La Tempête des Tropiques and La Référence.

The international donor community (DAC) supports the Congolese media landscape as well as local non-governmental organizations within the framework of bilateral cooperation. The government and security services regularly complain about “outside” interventions.

Due to its good range, radio plays a very important role in disseminating information in urban and rural areas, followed by TV stations. It is estimated that there are more than 200 mostly small radio stations and around 50 television stations in the DR Congo, a major country in African continent according to sourcemakeup. Political rulers who have the financial means to open their own radio station are particularly fond of using radio and television as a platform for political purposes.

The most important media are private television and radio stations such as Tropicana, Antenne A, CBS, Horizon or Raga and the state “Radio et Télévision Nationales du Congo (RTNC)”.

Radio Okapi, the only information source that operates on a national level in the Democratic Republic of the Congo, plays a major role in the current media landscape. The Radio Okapi project was launched as a partnership between the United Nations and the Lausanne-based Hirondelle Foundation. The initiators have achieved something unique here – a professional and multiethnic radio that broadcasts in almost every corner of this huge country and spreads political and social information to its audience in addition to music, culture and sport. Radio Okapi is one of the most important instruments of peace and reconciliation work in the DR Congo.

The Democratic Republic of the Congo has the largest rainforest area in Africa. The country still has untapped potential for agriculture and forestry. Seemingly endless natural resources slumber beneath the earth. And yet the people are bitterly poor – and wars and greed block the country’s great development potential.

The Democratic Republic of the Congo is the second largest country in Africa and at 2,345,410 km², around 6.6 times the size of the Federal Republic of Germany. The country extends between 5º 30 ‘north and 13º 5’ south latitude and between 12º 15 ‘and 31º 15’ east longitude in central Africa on the equator.

The 40 km long coast north of the Congo estuary is the only opening to the Atlantic Ocean. This separates the Angolan exclave Cabinda from the rest of the Republic of Angola. Among other things, there are oil deposits here.

The eastern border of the country forms the chain of lakes of the Great African Rift . These include (from north to south) Lake Albert , Lake Eduard , Lake Kivu , Lake Tanganyika and Lake Mweru. This border region also harbors some of the most important natural resources in Africa.