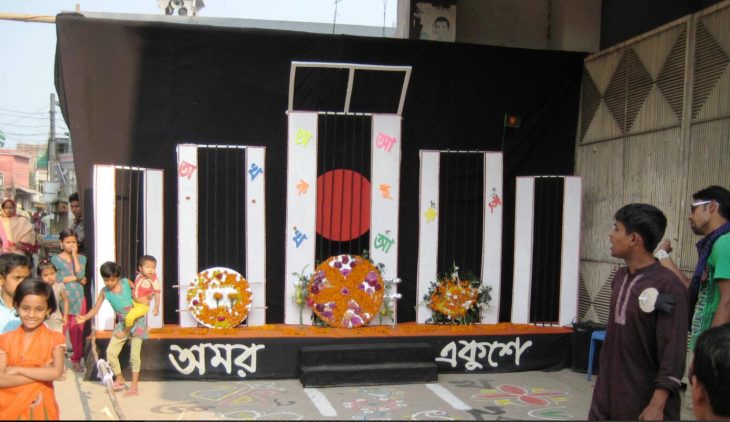 The monument to the martyrs of the language movement

In Article 3, the Bangladeshi constitution only names Bengali as a language, which is one of the eastern Indo-Aryan languages and thus belongs to the Indo-European or Indo-European language family. According to a 2011 census, Bengali is also the most widely spoken first language in the country with around 106 million speakers. In addition, Bengali is used as a second language by another 19.2 million residents who actually speak other languages from, in some cases, completely different language families than their mother tongue. In addition to Bengali, other major languages are Chittagonian (Bengali transliterated: cāṃṭꞋgāṃiẏā) with around 13 million native speakers, mainly in the southeastern metropolitan region of Chittagong(Bengali transliterated: chaṭṭagrām), Sylheti (Bengali transliterated: sileṭi) with around 7 million native speakers mainly in the northeastern division of Sylhet and Marma (Bengali transliterated: mārꞋmā) with around 150,000 native speakers, mainly from the ethnic minority of the same name, who predominate in Bangladesh lives in the south-eastern mountainous or coastal regions. Of these three languages, Chittagonian and Sylheti are most closely related to Bengali, although not every local variety can be understood. Marma is one of the Tibetan Burman languages and is a member of the Sino-Tibetan language family. A total of at least forty languages are spoken in Bangladesh that belong to three language families – in addition to the ones already mentioned, Santali, for example, as a member of the Austro-Asian language family. There are also various regional or local versions of the different languages. For example, Bengali has several dialects in Bangladesh alone. Nonetheless, the everyday language situation is relatively homogeneous in South Asian comparison, as the vast majority use Bengali – much to the detriment of English, which as a means of communication can only be spoken with members of certain higher education and income groups, but for further communication with the vast majority of the Bangladeshi population. Like most languages spoken in Bangladesh, Bengali is not only spoken in this country. With a total of around 230 million native speakers worldwide and an additional 40 million people who speak Bengali as a second language, Bengali is one of the ten most widely spoken languages in the world. It is mainly spoken in the Indian states bordering Bangladesh – mainly in West Bengal, where Bengali is the most widely spoken language, and also in Assam and Tripura – but also, for example, in those belonging to India Andaman and Nicobar Islands as well as in the USA and the UK. Bengali is reproduced using the script of the same name. This is shared by Bengali with Assamese, which is why the term “Bengali script” was often controversial. The script for Assamese has some of its own characters and is sometimes also referred to as the Assamese script. The Bengali script is a syllabary in which the consonants are followed by the vowel with the pronunciation ɔ. In addition, there are of course a number of other vowels that replace the inherent vowel ɔ with the desired vowel in writing with the help of vowel characters (see illustration “Bengali script: vowels” and “Bengali script: consonants”). 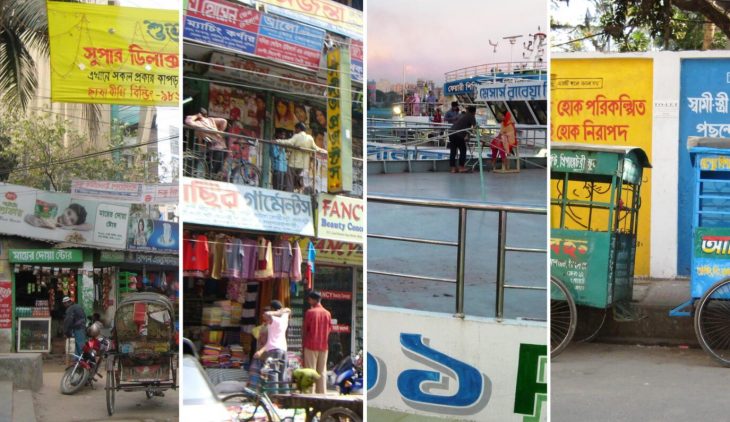 Bangladesh is a country located in southern Asia according to militarynous. From the perspective of a native German speaker with foreign language skills mainly in other Germanic or Romance languages, various difficulties arise when acquiring the Bengali language. These already begin with the set of sounds that Bengali uses, but which are not part of all or many Germanic or Romance languages to the same extent. In addition to certain nasalizations and retroflexes, this also includes the rolled “r” or tongue-tip “r”, which is only used in a few language varieties in the German-speaking area. The Bengali vocabulary also mostly has other sources than German. Thus, despite all the similarities between these two languages, which result from their genealogical relationship as members of the same language family (parallels e.g. in the formation of some tenses, word similarities (Bengali et al. Mātā for “mother”)), most words should not even after careful consideration be deducible if one has no knowledge of any of the other major South Asian languages. The basic sentence structure in Bengali verbal clauses has the sentence structure order “subject – object – verb”. This sequence of parts of the sentence is retained for both question and statement sentences. In spoken language, if there is no interrogative pronoun / question word, only the intonation of the sentence provides information about whether a question is being asked. In that case, the tone of the voice should rise towards the end of the sentence. For the present tense there are verbal clauses in Bengali as well as nominal clauses that can do without a main verb. In this case must be with a form of “to be, to be, to exist, to be” or the like. translated, although verbs are also available as equivalents to these. For example, the two-word sentence (transliterated in Bengali:) “tumi chātra” – in the literal translation “You student” – functions on the one hand as a statement “You are (a) student.” Or in the spoken language, given the intonation, as “bist you (a) student? ”. In addition, even a single verb conjugation or a single word in street or negotiation with strangers or service providers can function as a fully valid sentence without a lack of politeness having to be implicit. Bengali also has post positions, where prepositions are often used in German, some participles that are not used in German or not used to a comparable extent (e.g. absolute, conditional participle), some additional tenses, very many so-called impersonal constructions (e.g. to “have” or express feelings) as well as – comparable to German – various grammar and pronunciation rules, to which there are various exceptions.