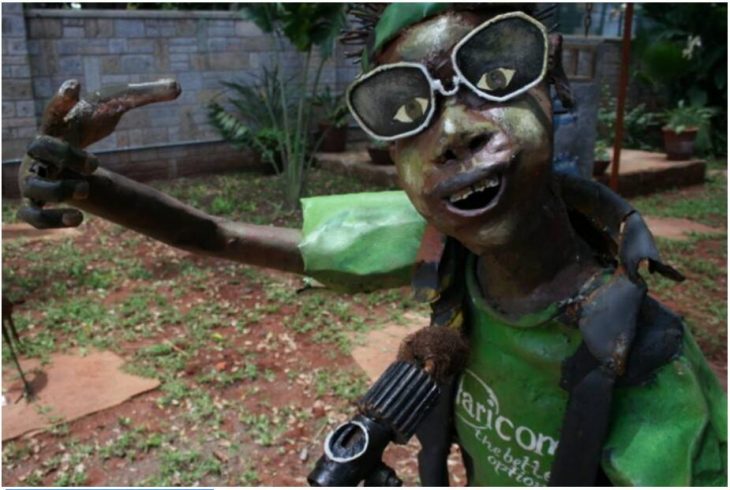 Radioman – Sculpture in the RaMoMa Museum

Kenya’s media are considered to be the best in the region, they are more widely distributed than in neighboring countries, and the media houses in Nairobi do not have to shy away from comparisons across Africa. 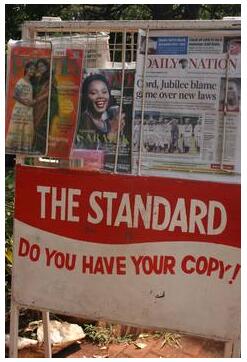 The Standard and Daily Nation are the leading daily newspapers

Even under the repressive regime of President Moi, the press was sometimes astonishingly critical of government policy and was instrumental in exposing corruption scandals. The Moi regime had little success with raids on the editorial offices and the arrest of journalists. Moi was able to keep radio and television largely under his control. Above all, the state broadcaster KBC ‘Kenya Broadcasting Corporation (radio, television, online), which for a long time was the only TV broadcaster to be received nationwide, was used for government propaganda and, particularly in the election campaigns of 1992 and 1997, resulted in completely distorted competition among competitors.

Reporters Without Borders (RSF) sees Kenya further deteriorated in 2020 to 103rd place in the ranking of press freedom, three places lower than in 2019 and only one place ahead of the far less democratic Mozambique. In 2018, Kenya was ranked 96th out of 180 countries compared (previous year: 95). Tanzania has slipped from 93rd to 124th place since 2018, Uganda from 117th to 125th. Conclusion: The freedom of the press in East Africa is not looking good, and the trend is negative. In Kenya, according to RSF, attacks on journalists and the temporary closure of four private TV channels and ten radio stations contributed to the deterioration in the ranking.

From the media houses of the Standard Group with the channel KTN and the Nation Media Group with Nation TV, KBC grew up in competition in the 1990’s, against which it stood for a long time as a museum. However, TV sets are not very common in rural areas due to a lack of money, electricity and reception facilities. Satellite television and the Internet are on the way to changing that. There are a number of satellite TV providers in different price ranges.

The most powerful medium was and still is the radio, although in an anti-colonial reflex against the British the Deutsche Welle enjoyed some popularity for a long time, but today it seems to be barely noticed in comparison with the BBC which can be received via FM.

All national TV channels also have radio stations. There are also a number of private radio stations such as Capital FM, Citizen, Kiss FM and local stations in tribal languages such as Radio Osienala on Lake Victoria, Radio Kameme or KASS FM. Some achieved notoriety during the 07/08 clashes. They were temporarily taken off the antenna for hate speech. The so-called “Ocampo-Four”, the prominent Kenyan defendants in The Hague, included the three top politicians Kenyatta, Ruto and Francis Muthaura as well as a radio presenter, Joshua arap Sang.

As a major country in African continent according to localbusinessexplorer, Kenya has a lively print press that is also of high quality in comparison with Africa, and with the growth of the middle class since 2005, it has also produced a number of special-interest offshoots and glossy magazines. The Nation Group publishes the leading daily newspaper, Daily Nation, with a circulation of around 220,000. It also has a sophisticated business daily, the Business Daily, in classic pink, all accessible via nationmedia.com.

The nation’s main competitor is the Standard, which has a print run of 40,000. Nation and Standard have daily tabloids in the market as well as weekend editions. The circulation figures seem low, but a newspaper copy in Kenya is read by far more people than in Germany, for example. Nobody throws away newspapers. First, they are passed on for reading, and they also serve many other purposes.

The East African, which comes from Nation and is published on Mondays, takes care of the region and always contains good dossiers. There are two travel magazines, plus True Love (a kind of “Brigitte” for Africa), the Drum for culture, pop and fashion and a number of irregularly appearing magazines devoted to art, the Asian minority or environmental protection.

Since the beginning of the 1990’s, the print press has enjoyed increasing freedom, even under Moi. Kenya’s leading cartoonist GADO, with worldwide buyers, has surprisingly been able to publish its biting, daily cartoons in the nation since 1992 with impunity and has even found a TV forum for its characters. Editors-in-chief and individual journalists are repeatedly put under massive pressure by politicians. At the instigation of then Minister of Security John Michuki, the editorial rooms of the Standard were raided and devastated in 2006; the following day was one of the few since 1902 on which the newspaper could not appear. The first wife Lucy Kibaki caused a sensation several times who slapped a cameraman in the Nation Building and complained about the critical coverage of her husband. The original episode can be seen on youtube and was also used as a template for a sketch by the comedy group Reddykulass.

In Kenya, too, the following applies to most of the media: If you are not on the Internet, you do not exist, which has greatly increased the scope of the classic media. Even if not every Kenyan has a PC and Internet at home, Kenyans are second only to South Africa when it comes to using social media in Africa.

The website allafrica.com provides an incomplete overview of newspaper texts. The Nairobi-based Foreign Correspondents Association of East Africa (FCAEA) has put many of its members’ texts online. There are also numerous blogs and Facebook addresses, such as those of the late writer and publisher Binyavanga Wainaina (not to be confused with the musician Eric Wainaina), which have created a critical public outside the mainstream. The African point of view is also gaining in reach in Europe, be it via Facebook as in the case of Wainainas, blogs or other forms such as the image platform journafrica.de, which aims to overcome stereotypes in reporting.