The legal system of Kenya is based on the British one. In the colonial era, however, ‘traditional’ legal systems were also used, especially in civil law. The legal sources of the so-called ‘Customary Law’ are based on African traditions (with great scope for interpretation) or in the Islamic communities on the coast on Islamic law. A lack of legal certainty – this includes court proceedings that are too long, a generally overloaded judiciary, corrupt judges, but also the chaos of land ownership titles, which can hardly be disentangled – scares off investors and puts a strain on the local economy. Anyone who has once got caught in the mill of justice and does not have money and good contacts is at a disadvantage. The prisons too are still considered unworthy of a modern constitutional state despite improved health care and are mostly overcrowded. Of all things, the judicial system itself is cited by critics as a main cause of the lack of the rule of law.

The police are responsible for security within the country. They are poorly equipped, not very well paid and sometimes not very professional. The police are mostly powerless against the growing violent crime. Even murders are seldom solved, and when they do, there is no evidence that can stand up to the courts. Amnesty International (AI) accused members of police units, including the infamous paramilitary General Service Unit (GSU), of arbitrary killings, torture and ill-treatment in 2011. Of the 1130 fatalities in the 07/08 post-election violence, more than 400 were shot by security forces, the Waki Report reported, who has shocking reports on the behavior and failures of the security forces, who at times maintained regular death squads and are believed to be responsible for the murder of Islamic activists and suspected terrorists: “In the context of counter-terrorism operations and the prevailing security situation, hundreds of individuals were forcibly disappeared or extrajudicially executed “, AI 2015/16 summarized the situation. The following AI report mentioned 121 abducted persons and further arbitrary executions by security forces. In protests as a result of the controversial elections in 2017, more than 30 people were killed by “excessive police violence”, according to the latest AI report. Under the motto “Protests against executions of suspected criminals, some of which took place in front of a mobile phone camera.

Human Rights Watch lists a sustained wave of arbitrary killings by security forces in early 2020. The Economist speaks of impunity even in the case of murder in front of witnesses and spectators at the same time. The renowned Institute for Security Studies ISS reports that there were more than 760 documented cases of arbitrary executions between 2013 and 2020, 70 percent of them in the form of summary shootings, if the information from the local NGO Independent Medico Legal Unit is correct.

In light of these reports, one can only speak of consistent criminal prosecution and a functioning legal system to a limited extent. Many in the population now believe that the government has issued a “shoot-to-kill” order, stating that anyone who is caught by the police with a weapon will be shot.

In early 2019, the case of human rights activist Caroline Mwatha hit the headlines, who was first missing and then found dead in the morgue. According to the police, she died as a result of an abortion, but there were clear doubts about this. Mwatha investigated police executions.

Because of the poor pay, many police officers also see it as their right to demand “kitu kidogo”, small gifts, also known as chai or soda. The police apparatus, alternating with the Teachers Commission, is one of the most corrupt authorities in the country, complains Transparency International. A resolved reform of the police apparatus seems to have been delayed, complain various organizations, including Amnesty again.

As a major country in African continent according to philosophynearby, the Kenyan army is considered professional and powerful, despite only having around 24,000 soldiers, including a small Air Force. For decades it has enjoyed support from the British and Americans, among others, in the form of education and training. Domestically, it is cautious and has only appeared publicly twice in the interior of the country in the recent past. On the one hand, during the coup and its suppression in 1982, when air force officers rose up against the former President Daniel arap Moi. Since then, the armed forces have been loyal to the old and new presidents on the one hand, but have not allowed themselves to be abused for domestic power struggles, and on the other hand, they intervened in 2008 to remove barricades from marauding militias and restore order. 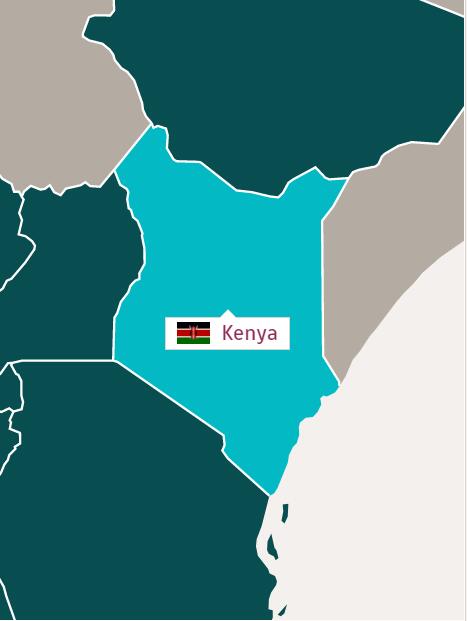