Located in the northeastern United States with an area of ​​4005 km². Rhode Island’s nickname is The Ocean State. The capital is Providence. According to ablogtophone, about 1.1 million people live in Rhode Island.

It is not entirely clear where the name of the state comes from today. It is believed that the Italian explorer Giovanni da Verrazzano made this happen. When this navigator discovered Block Island (an island off the coast of the state of Rhode Island) in 1524, he named it Rhodes because he believed that the island was about the same size as the Greek island of that name. In reality, the island off the American coast is more than twice the size of the Greek Rhodes.

Another explanation is that the Dutch explorer Adriaen Block called the large island “Roodt Eiland” because of the red-colored heather on the island.

Originally, the present-day state of Rhode Island was populated by Native American tribes. The first settlers arrive in 1636. The first settlers are individualists and believers from Massachusetts, led by one Roger Williams, an English theologian chartered by the king and founding the city of Providence.

A second group of settlers found Portsmouth in 1638, Newport in 1639 and Warwick in 1643. What was remarkable about Rhode Island was the complete religious freedom that prevailed in the area. Roger Williams was therefore an open-minded Christian. One of his most famous quotes is:

“God is too large to be housed under one roof.”

The freedom of religion gives Rhode Island its own character. Many Quakers and Baptists use the state as a refuge. Roger Williams is said to have founded the first or second Baptist church in America.

During the American Revolutionary War (1775-1783), the state played an important role. Already on May 4, 1776, the inhabitants of the state declare their independence from England. When America adopts a new constitution in 1787, it will take another three years for Rhode Island to ratify it. The sense of independence and individualism is so great in the state that it is difficult to agree. Rhode Island ratifies the Constitution on May 29, 1790.

Politics in Rhode Island has long been dominated by a small group of oligarchs and merchants. In 1842 a revolt takes place under the leadership of Thomas Dorr. Although his attack on the capital fails, a liberal constitution designed by him is nevertheless adopted by referendum. Among other things, this extends the right to vote.

During the American Civil War (1861-1865), the state sided with the Union. According to bestitude, Rhode Island became the first state to outlaw slavery on May 18, 1852. 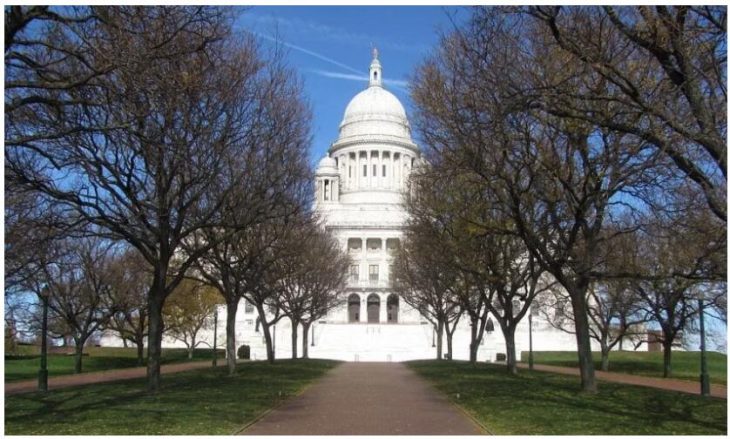 The state flag was adopted in 1897 and consists of a white field topped with a gold anchor above a ribbon that reads Hope (“Hope”). The anchor and ribbon are surrounded by thirteen gold stars. These represent the thirteen colonies that formed the United States of America and the fact that the state was the thirteenth of them to sign the United States Constitution.

The Roger Williams National Monument is located in a landscaped park located in Providence, Rhode Island. Bordered by North Main, Canal and Smith Streets and Park Row. The monument commemorates the life of a supporter of the ideal of religious freedom and the founder of the colony of Rhode Island, Robert Williams. Williams, who was banished from Massachusetts for his beliefs, founded this colony in 1636 as a refuge for all those who worshiped a different faith, which they could continue to practice here without interference from the state. The park that was created on this site is the 20th smallest national park in the country.

Roger Williams, the theologian, was born in 1603 in the London section of Smithfield, England. His father was a relatively successful merchant, so even after his death in 1621, the family remained very financially secure. Alice Pemberton’s mother was born in 1564 in the town of St Albans and eventually ran a popular inn in London. Roger also had an older brother, Sydrach, an older sister, Kateřina, and a younger brother, Robert.

Roger was a Christian and became a minister in the Church of England. However, he changed his religion very often, he was a Puritan, a separatist and a member of many other religions. He was dissatisfied with all organized religions and was constantly searching for something that was closer to his soul. He was unable to find himself in any faith. In addition, he also became a strong supporter of the Native Americans and defended their faith. Roger Williams was a very learned man, mastering several world languages such as Latin, French, Greek, Dutch and even Hebrew.

After graduating from Cambridge, Roger became a chaplain to a wealthy family. In 1629, he married Mary Bernard in Essex, England, and they eventually had six children together. Williams died sometime between January and March 1683, aged 80. In his memory, a city park and memorial was created in Rhode Island in 1965, which is now managed by the National Park Service and is therefore also listed on the National Register of Historic Places.