New Hampshire is a state in the northeast of America belonging to the New England region. According to ablogtophone, New Hampshire is nicknamed Granite State and covers an area of ​​24,239 km². Concord is the capital of the state that has about 1.3 million inhabitants.

The short coast of present-day New Hampshire was first explored in 1603. This by the English explorer Martin Pring. Some time after this (1605 and 1614) the explorers Champlain and John Smith followed suit . The first permanent colony was established in 1623.

The New Hampshire Blue Flag features the state seal in the center. Around this seal are some images of laurel branches and nine stars. These stars symbolize that the state was the ninth signatory to the United States Constitution. 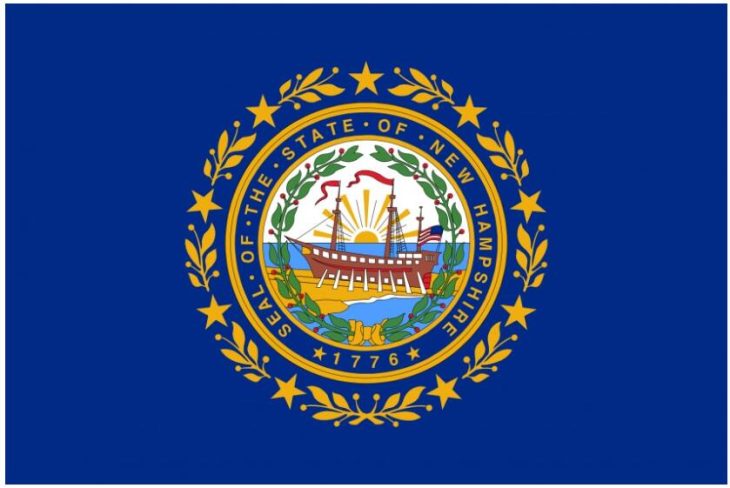 The stamp shows the frigate USS Raleigh. Built at Portsmouth in 1776, this ship was one of the first thirteen ships of the United States Navy. In 1778 the British captured this frigate. The state flag was adopted in 1909.

Located in Cornwall, New Hampshire, Saint-Gaudens National Historic Site protects the homes, gardens, and studios of one of America’s leading sculptors. Augustus Saint-Gaudens lived from 1848 to 1907 and the site served as his summer residence until 1897. From 1900 until his death, Saint-Gaudens used the site as his permanent residence and the Cornish Colony Art Center was also established here. The original sculptures are exhibited here. Two hiking trails pass through the nature park, where you can see these sculptures.

Today, more than 100 of his sculptural works are part of this historical monument, which are located in the galleries. In the summer, you can enjoy concerts here, wander through the park or try your sculpting talent during the Sculpture Festival. After the death of the sculptor Gauden, the studios and premises here, where the American sculptor lived and worked for 22 years, fell into the hands of his wife and their son. Both tried to maintain and protect this property as a national monument, but it was later sold to the state.

The site was declared a National Historic Landmark by Congress in 1964, which was finally designated on May 30, 1977. Since October 15, 1966, Saint-Gaudens NHS has been listed on the National Register of Historic Places. Along with the Appalachian Trail, the site is the only place in the state of New Hampshire protected by the National Park Service. The park currently occupies an area of ​​33 acres.