There are 1 high school codes in Uzbekistan today, according to the ACT. The full list is shown below by city, with name of each high school and the city where the school is located (based on the ACT official site). You can search a school code by pressing “Ctrl” + “F” and then type school name or 6-digit school code. 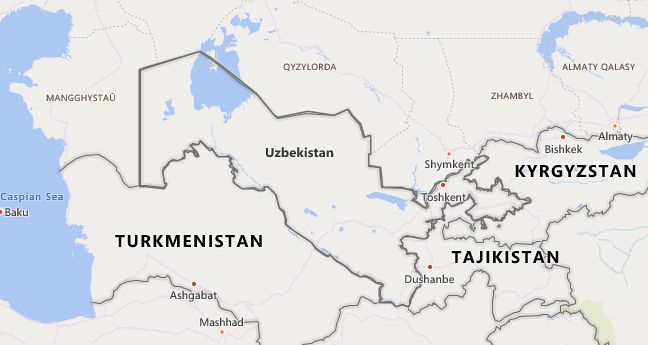 The above lists CEEB codes (College Entrance Examination Board) for all accredited Uzbekistan high schools. Please be informed that the list of high school codes in Uzbekistan may change throughout the year. If you can’t find codes for the high schools of your interest, please write to us or come back at a later time. We will update our database soon after a new high school code is added to the country of Uzbekistan.

The national flag was adopted on November 18, 1991. It is horizontally striped blue over white over green, the white stripe is trimmed with narrow red stripes. In the upper corner there is a white crescent moon, next to it twelve five-pointed white stars, right-aligned one above the other with five, four and three stars. They represent the areas. Blue symbolizes the sky and the water, white the peace and purity, green nature and fertility. The two red stripes stand for the vitality of the people.

The coat of arms was established in 1992. It shows a bird in the center, the tips of its wings embracing a sun rising over mountains and rivers. The depiction is framed by a wreath of cotton twigs and ears of wheat, which in turn is wrapped in a ribbon in the national colors, in the lower part of which the name of the state is written in gold in Cyrillic script. There is an eight-pointed star above the sun, covered with a crescent moon and a star.

National holiday: September 1st commemorates the declaration of independence in 1991.

Uzbekistan is the most populous among the Central Asian republics. 84% of the population are Uzbeks. The national minorities include Tajiks (5%), Kazakhs (3%), Russians (2%) and Karakalpaks (2%) as well as Kyrgyz, Koreans, Armenians, Ukrainians, Tatars, Turkmens and Germans. The minorities reach high proportions in various regions, for example the Tajiks around Bukhara and Samarkand make up the majority of the population. With independence in 1991, a strong emigration of Russians began, which has weakened again since the mid-1990s. The official language is Uzbek. It is spoken by about three quarters of the total population. The conversion from the Cyrillic to the Latin script is slow. Russian serves as the inter-ethnic lingua franca, but has lost its importance due to the emigration of many Russians.

With an average of 77 residents per km 2 , Uzbekistan is very densely populated in a regional comparison. Due to the natural conditions, the population is concentrated in the oases of the foothills and in the fertile Fergana basin. In contrast, the high mountains in the east and south-east and the desert and semi-desert regions in the north-west, which occupy 70–80% of Uzbek territory, are only very sparsely populated. The proportion of the urban population is 50% (2018). By far the largest city is the metropolis of Tashkent , followed by Samarkand , Namangan , Andischan and Bukhara.

The biggest cities in Uzbekistan

The old cities are divided into an oriental old town with winding streets and younger, Soviet-influenced quarters with apartment blocks and monumental administrative buildings.

Social: The standard of living of the population is low, around 14% of the population live below the poverty line. Due to financial problems, the standard of the public health system, especially in rural areas, is severely impaired. Most of the clinics, which were still from the Soviet era, only have outdated equipment. In 2014 there were an average of 2.7 doctors and 4.4 hospital beds for every 1,000 residents.

The family is very important and takes on many social welfare tasks (nursing the sick and the elderly). Equal opportunities between the sexes only exist formally. Boys often have a better education, whereas many girls are usually married off early. Over two million Uzbeks live as migrant workers abroad, mainly in Russia.

The constitution guarantees religious freedom and establishes the separation of state and religion as a constitutional principle. Following this, the state represents the principle of secularism, but recognizes Islam as an important basis of the Uzbek national identity.

The dominant religion is Sunni Islam (predominantly the Hanefi school of law), to which between 88 and 93% of the population, together with the Uzbeks, Kazakhs and other Turkic-speaking nationalities and the Tajiks, nominally belong; the Azerbaijanis (Azeri) form a small Shiite minority (about 1% of the population; regional centers: Bukhara and Samarkand). In addition to the Islam supported by the official Islamic institutions – especially among the Karakalpaks  - the Sufi-influenced popular Islam is of great importance.

The proportion of Russian Orthodox Christians in the population is around 4–9%; Smaller religious communities of around 3% together are Protestants (mostly Pentecostals and Baptists) and Catholics. The Buddhists (Koreans) and the Jews represent non-Christian religious minorities.