There are 3 high school codes in Uruguay today, according to the ACT. The full list is shown below by city, with name of each high school and the city where the school is located (based on the ACT official site). You can search a school code by pressing “Ctrl” + “F” and then type school name or 6-digit school code. 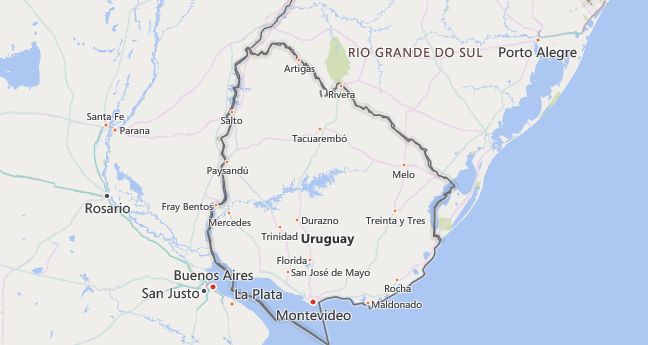 The above lists CEEB codes (College Entrance Examination Board) for all accredited Uruguay high schools. Please be informed that the list of high school codes in Uruguay may change throughout the year. If you can’t find codes for the high schools of your interest, please write to us or come back at a later time. We will update our database soon after a new high school code is added to the country of Uruguay.

The export-oriented agricultural sector traditionally forms an important pillar of the economy with its extensive animal husbandry. Formerly one of the most prosperous countries on the continent, recession and short-term growth phases have alternated since the 1970s, partly as a result of crises in the neighboring states of Brazil and Argentina; the long-term average the economy stagnated, which led to a noticeable drop in the standard of living. Since 2003, Uruguay has recorded above-average growth thanks to the development of the service sector (especially trade and logistics) and manufacturing (especially agricultural industries) and has also defied the global financial and economic crisis; the gross domestic product(GDP) grew by 5.3% annually from 2003 to 2011 (2016: 1.5%). The market economy reforms that have been introduced in the meantime (above all, tariff cuts, restructuring of public finances and the privatization of state-owned companies) are only making slow progress because their social consequences are causing resistance from traditionally strong unions and large sections of the population. Privatization plans have been rejected several times in referendums. As a result, the public sector accounts for around a quarter of economic output. The inflation rate, which was up to 100% before the turn of the millennium, was reduced to 6.1% (2017). Measured in terms of gross national income (GNI) per resident of (2017) US $ 15 250, Uruguay is one of the richer countries in South America. The national debt amounts to 59.8% of GDP (2017); the unemployment rate is 7.3%.

Foreign trade: Since the mid-2000s, the foreign trade balance has been almost balanced or slightly negative (import value 2016: US $ 8.1 billion, export value: US $ 7.0 billion). The main export goods are food (beef, rice, soybeans, milk and milk products, wheat and fish), wood and pulp, chemical products and leather goods. Mainly crude oil, chemical products, machines as well as motor vehicles and parts are imported. The most important customer countries are Brazil, Argentina, China and the USA; China leads among the supplier countries, followed by Brazil, Argentina and the USA.

Parallel to the colonization of the country and the extermination of the indigenous population (until 1832), the languages, customs, architecture and art of the Iberian conquerors established themselves. This is particularly evidenced by the oldest city in the country, Colonia del Sacramento, founded in 1680. With numerous architectural monuments, such as the presidential palace from 1730, as well as alleys, squares and parks, your historic quarter lets the flair of long-lost colonial times shine through.

The capital Montevideo established its status as a cultural center in the 19th century with libraries, dance halls, galleries and theaters. The dispute with Argentina over the authorship of the world-famous tango touched the national pride of the Uruguayans and even escalated into diplomatic entanglements. In fact, the origin of the melancholy-sensual dance, which was created around 1870, lies in the dark. Historians, however, name Montevideo as well as Buenos Aires as possible places of origin.

In 19th century Uruguayan literature, gaucho folklore and European-inspired works stood side by side. The well-read representatives of literary modernism include the existentialist J. C. Onetti , whose novels describe the isolation and fear of human life, and M. Benedetti , who with his brilliant witticism set a monument to the narrow world of the Montevideo bourgeoisie (collection of stories “Montevideanos”, 1959).

Highlights of the cultural calendar in rural Uruguay are rodeos as well as music and dance festivals such as the »Fiesta de Gauchos« during Easter and, above all, the carnival with the candombe music of Afro-Uruguayans.

Like almost everywhere in Latin America, “King Football” has the highest priority in sport. The first ever football World Cup took place in Uruguay in 1930. In addition to hosting the sporting event, La Plata Land also won the title. In the final on July 30, 1930, it defeated neighboring Argentina in Montevideo 4-2 and went down in sports history as the first soccer world champion. In 1950 it won its second and to this day last world title.