There are 1 high school codes in Somalia today, according to the ACT. The full list is shown below by city, with name of each high school and the city where the school is located (based on the ACT official site). You can search a school code by pressing “Ctrl” + “F” and then type school name or 6-digit school code. 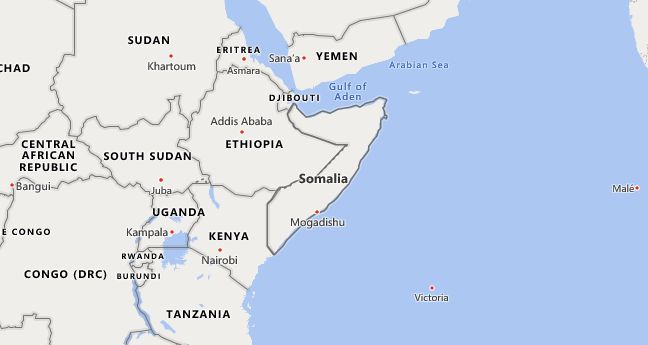 The above lists CEEB codes (College Entrance Examination Board) for all accredited Somalia high schools. Please be informed that the list of high school codes in Somalia may change throughout the year. If you can’t find codes for the high schools of your interest, please write to us or come back at a later time. We will update our database soon after a new high school code is added to the country of Somalia.

The 1979 constitution, which made Somalia a one-party presidential republic, was repealed in January 1991. Due to the ongoing power struggles between rival rebel movements and militias, neither parliament nor government nor any other regular, capable state structures existed in the period that followed. After numerous unsuccessful ceasefire negotiations and peace conferences, a Transitional Federal Charter (TFC) was passed in 2004, on the basis of which a transitional parliament with 275 members was formed in the same year. This parliament elected a president and appointed a transitional government. In 2008 the transition period was extended to 2011 and the number of MPs doubled to 550 (2011 renewed extension of the transition period to August 20, 2012). On August 1, 2012, a constituent assembly adopted a constitutional text (The Federal Republic of Somalia – Provisional Constitution) to be confirmed in a referendum. After that, Somalia is a federal republic with the Islam as the state religion. The head of state and commander in chief of the armed forces is the president, who is elected for a four-year term. He appoints the prime minister who heads the government. The legislature lies with the bicameral parliament, consisting of the lower house (“House of the People”) with 275 members and the upper house as the representative body of the federal states with 54 members (legislative period for both chambers 4 years). A constitutional court is responsible for the control of norms.

The members of the House of Commons, which met on August 20, 2012, could not yet be determined by general elections. The composition of the legislature was based on a special selection and appointment process by 135 clan leaders. In 2016, 14 025 electors voted. This year the members of the upper house, the second chamber of parliament, were elected for the first time. General elections are scheduled for 2020. – In 1991, Somaliland was established in the north-west of the country as an independent state, but not recognized under international law, with its own constitution and its own legislative and executive bodies. In 1998 the Puntland area declared itself an autonomous republic within the state of Somalia.

A party system in the traditional sense could not develop because of the long internal turmoil. It is only recently that new party political organizations have emerged that are heavily influenced by ethnic groups and clans. These include: Peace and Development Party (PDP; founded 2011); Somali National Party (SNP; founded in 2010) and the Daljir party (founded in 2012).

There are no official unions.

The Somali armed forces were still around 65,000 strong at the end of the 1980s, but then disbanded as a whole. Building new central military structures is tedious. Somaliland and Puntland have their own armed forces. The central government in Mogadishu has army units with around 10,300 men at its disposal. According to the resolution of the UN Security Council of February 2012, the nominal strength of the AMISOM troops is 17,731 men.

The law developed under Italian, British, traditional and Islamic influence. As a result of the civil war, the law and justice collapsed; a nationwide functioning administration of justice no longer exists. Sharia courts and traditional dispute settlement systems dominated by clan elders gained in importance. As a result, Islamic and traditional law have become dominant in legal practice. State judicial bodies, if they exist at all, only play a subsidiary role. The constitution, which was adopted on August 1, 2012, provides for a three-tier judicial system.

In Somaliland, which is split off from Somalia and is not recognized internationally, there is a court system consisting of district courts, regional courts, a court of appeal and a supreme court. The jurisprudence is based on state and Islamic law.

Somalia is divided into 18 regions with 84 districts.

Before the start of the civil war, the school system was divided into six-year primary schools (elementary schools) and four-year general secondary schools, on which the higher college education was based. As a result of the civil war and the subsequent disintegration of state structures, the school system in most of Somalia has collapsed and is currently at the beginning of an arduous reconstruction process with international help. The “Republic of Somaliland” is an exception, where a separate school system with primary and secondary schools has been established and two universities have been founded in Borama (1997) and Hargeysa (2000). The National University of Somalia (founded in 1954, university since 1969) is based in Mogadishu.