There are 6 high school codes in Serbia today, according to the ACT. The full list is shown below by city, with name of each high school and the city where the school is located (based on the ACT official site). You can search a school code by pressing “Ctrl” + “F” and then type school name or 6-digit school code. 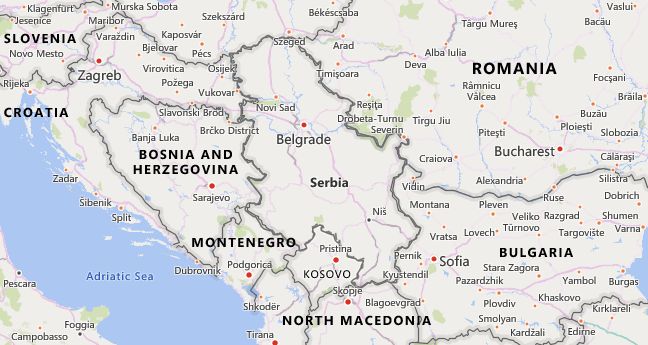 The above lists CEEB codes (College Entrance Examination Board) for all accredited Serbia high schools. Please be informed that the list of high school codes in Serbia may change throughout the year. If you can’t find codes for the high schools of your interest, please write to us or come back at a later time. We will update our database soon after a new high school code is added to the country of Serbia.

As a result of the country’s involvement in the Yugoslav civil wars, international sanctions, the NATO air strikes in 1999 and ongoing political instability, the country’s economic output shrank to less than half of its 1989 output by 2000, and unemployment rose to 30%. The currency was hit by hyperinflation in the mid-1990s. Structural reforms largely failed to materialize during the 1990s. The political reorientation after the replacement of the then Yugoslav President S. Milošević in 2000 paved the way for regulatory and economic reforms (including privatization laws), which overall have been hesitant to implement. Serbia, especially the areas affected by the NATO bombing, became the main targets of international support services under the Stability Pact for Southeastern Europe after 1999. Starting from a low level, growth in gross domestic product (GDP) averaged 5% in 2000-08, collapsed in 2009 (-4.0%) and has since experienced slow growth (2010: 1.8%; 2017: 1.8%). The gross national income (GNI) per resident reached US $ 5,180 in 2017. The stock of foreign direct investment (mainly from the Netherlands, Austria and Cyprus) is gradually increasing (2016: US $ 30.3 billion). The national debt for 2017 is given as 61.5% of GDP. Unemployment also remained at an unchanged high level at 14.1% in 2017, with the shadow economy playing a major role.

Foreign trade: The country’s foreign trade is only slowly recovering from the aftermath of the Kosovo war in 1999. The main export goods are electronic products, machinery and transportation equipment, agricultural products and chemical products. Mainly machines and vehicles, chemical products, fuels and consumer goods are imported. Important trading partners are Germany, Russia, Italy and Bosnia and Herzegovina. Mainly energy raw materials are imported from Russia. The trade balance remains negative (2016: -4.38 billion US $).

18.6% of the workforce is employed in agriculture, which contributes 7.9% to GDP (2016). Around three quarters of the usable agricultural area is mainly farmed as a sideline by private farms, where self-sufficiency is the main focus. The average size of private companies is only 3.5 hectares. There are also large state-owned companies that combine large-scale cultivation with the processing and marketing of their products. The focus of agriculture is in Vojvodina (fertile black earth soils). The most important crops are maize, wheat, sunflowers, sugar beets and potatoes. In addition, the cultivation of fruit (plums, grapes, apples) and vegetables (cabbage, tomatoes) is important.

Forestry: Forest takes up about a quarter of the territory, the logging amounted to 7.7 million m 3 (2015).

The mining of lignite, v. a. in the Kolubara Basin, near Kostolac on the Danube east of Smederevo, the greatest importance. The mining sites supply nearby thermal power plants. Crude oil and natural gas are produced in the Serbian Banat. Uranium is mined in eastern Serbia (near Kalna). When it comes to ore extraction, copper ores (in Majdanpek and Bor in eastern Serbia, where gold is also extracted) have the largest extraction volume; Iron ores are extracted in eastern Serbia (near Krepoljin) and on the Kolubara (Lajkovac). There are significant deposits of antimony on the Drina in northwestern Serbia (Zajača, Brasina). In mining, production fell less sharply than in other economic sectors during the crisis of the 1990s.

The basis of energy generation is formed by the lignite deposits and the imports of crude oil with which the thermal power plants are operated. The hydropower potential is used on the Danube and Drina. In 1972 the Danube power plant at the Eiserner Tor, built as a joint venture with Romania, was put into operation (total installed capacity of 2,532 MW). 59% of electricity is generated from fossil fuels, 38.8% from hydropower and 2.2% from other renewable energies.