There are 2 high school codes in Saint Lucia today, according to the ACT. The full list is shown below by city, with name of each high school and the city where the school is located (based on the ACT official site). You can search a school code by pressing “Ctrl” + “F” and then type school name or 6-digit school code. 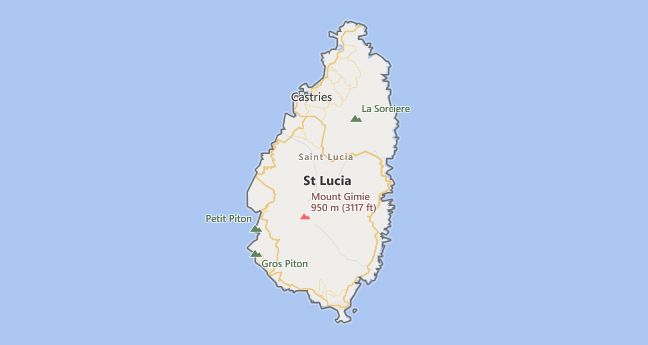 The above lists CEEB codes (College Entrance Examination Board) for all accredited Saint Lucia high schools. Please be informed that the list of high school codes in Saint Lucia may change throughout the year. If you can’t find codes for the high schools of your interest, please write to us or come back at a later time. We will update our database soon after a new high school code is added to the country of Saint Lucia.

Saint Lucia includes the island of the same name in the Lesser Antilles.

Saint Lucia is located in the arch of the “Islands above the Leeward”. The mountainous country, which is mainly made up of early and middle-Tertiary andesites, basalts and rhyolites, is cut up by numerous river valleys. The highest point is Mount Gimie (950 m above sea level). In the southwest, at the edge of an active volcanic crater, the two mountain cones of the Pitons rise (Large Piton: 770 m above sea level; Small Piton 743 m above sea level). On the coast, cliffs alternate with palm-fringed sandy beaches.

The marginal tropical climate is influenced by the north-east trade winds, with average temperatures of 25 ° C to 30 ° C and annual rainfall of around 1,200 mm in the south-west (leeward) to over 3,500 mm in the mountains and on the north-east facing windward side. The tropical rainforest, which is only preserved at higher altitudes, has been replaced by secondary vegetation or agricultural use.

Nature conservation: Since 2004, the Pitons nature reserve with its volcanic landscape, fumaroles and hot springs as well as the adjacent marine area with coral reefs and the diverse underwater world has been a UNESCO World Heritage Site.

“The Voice of Saint Lucia” (founded in 1885) and “St. Lucia Star «(founded 1987). The weekly papers are “The Crusader” (founded in 1934), “The Mirror” (founded in 1994), “The Vanguard” and “One Caribbean”. About 15 radio stations make radio, including the state-run “Radio Saint Lucia” (RSL) as well as “Radio Caribbean International” (RCI), “Radio 100 Live” and “Hot FM”. TV programs broadcast, among other things. the state “National Television Network” (NTN), the commercial broadcasters “Hence Broadcasting Service” (DBS) and “Helen Television System” (HTS) as well as the “Catholic Broadcasting TV Network” (CBTN) and cable broadcasters.

The residents are predominantly black and mulatto (together around 96%), descendants of the slaves who were abducted from Africa; 2% are Indians, 1% each are European and Indigenous. As a result of the French colonization of the island, French Creole is spoken in addition to English. The population density is 293 residents / km 2. The proportion of the urban population is only 19%. The most important places besides the capital and port city of Castries are Micoud on the east coast, Gros Islet in the north and Vieux Fort in the south of the island.

Social: The state social security system was introduced in 1970. In 2013 there were 13 hospital beds for every 10,000 residents in the public health system.