There are 3 high school codes in Paraguay today, according to the ACT. The full list is shown below by city, with name of each high school and the city where the school is located (based on the ACT official site). You can search a school code by pressing “Ctrl” + “F” and then type school name or 6-digit school code. 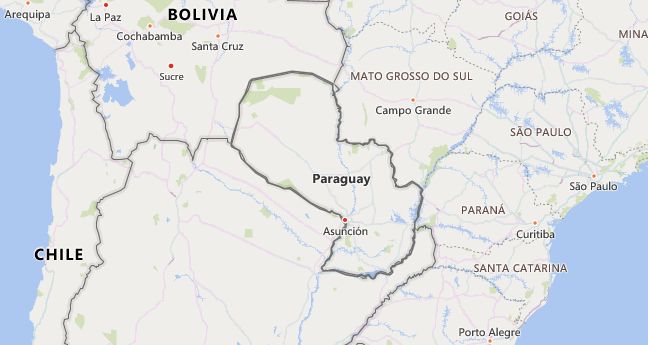 The above lists CEEB codes (College Entrance Examination Board) for all accredited Paraguay high schools. Please be informed that the list of high school codes in Paraguay may change throughout the year. If you can’t find codes for the high schools of your interest, please write to us or come back at a later time. We will update our database soon after a new high school code is added to the country of Paraguay.

The landlocked state of Paraguay has predominantly flat land character. The Paraguay River, from which the country owes its name, divides it into two large units. The larger western region includes the gently sloping embankment plain (450-100 m above sea level) of the Chaco boreal (Gran Chaco) to the east. The eastern region is part of the Precambrian Brazilian Shield, which is covered by Paleozoic and Mesozoic rocks and consists of a partially plateau-like mountainous region rising to the east to 700 m above sea level. The floodplain becomes a natural area of ​​its own due to its usually considerable width. The highest point is the Cerro Peró (842 m above sea level).

After President Federico Chaves (* 1882, † 1978), who had been in office since 1949, was overthrown in May 1954 by a military coup by General A. Stroessner, he held government power for 34 years. After his formal election on July 11, 1954, he officially took over the office of President on August 15, 1954. After the overthrow of the Argentine President J. Perón (1955) Paraguay leaned closer to Brazil. Stroessner who ruled with dictatorial powers despite the existence of a democratic constitution, has been re-elected every five years since 1958. In the 1963 elections, women participated for the first time. In the 1968 elections, the opposition was again allowed to put up its own candidates. Despite several attempts to overthrow, especially those promoted by Paraguayans in exile, Stroessner, leaning on the military and the Colorado Partido to assert his power. He tried to expand and promote agriculture, education and infrastructure. In doing so, he managed to keep the currency relatively stable. At the same time, he was guilty of the most serious human rights violations. According to official information, 400 opponents of the regime “disappeared” in Paraguay, while human rights organizations put the number of deaths at several thousand. After 1967 a new constitution, the Stroessner the re-election of 1968 made possible, the Catholic Church, which had been loyal to the state until then, increasingly criticized the violation of human rights and economic development. While the domestic political situation remained tense, the government tried to secure its industrial policy in terms of foreign policy (agreements with Bolivia on the supply of oil and gas, agreements with Argentina and Brazil on the construction of hydropower plants on the Río Paraná).

Disputes over Stroessner’s seventh candidacy within the Colorados led to the split in the party. Stroessner was re-elected in February 1988, but was overthrown on February 3, 1989 in a bloody military coup that brought General A. Rodríguez to power. In May 1989 Rodríguez was confirmed by parliamentary and presidential elections. After partial reforms (admission of opposition parties in the first free local elections in May 1991, freedom of the press), a constituent national assembly was elected on December 1, 1991, which drafted a democratic constitution (which came into force on June 22, 1992). J. C. Wasmosy Monti won the first democratic presidential election (9 May 1993) (Partido Colorado).

Guaraní, Paraguayan Guaraní [ paragva ɪ – even paragu a ː i] own name Avane ‘ é [a  a ɲ εe] language in Paraguay (3.5 million speakers), northeastern Argentina (up to 1 Million speakers) and southern Brazil. Guaraní, one of the Tupí-Guaraní languages, is one of the largest Indian languages South America (after Quechua and before Aimara) and the only one that is mainly used by non-Indians. Guaraní has ​​been recognized as a national language in Paraguay since the 1990s and is also used in schools. The Guaraní was strongly influenced by centuries of close contact with Spanish and now differs considerably from the still existing related Indian Guaraní languages, especially in its colloquial mixed variety, the so-called Jopará,that has taken many words but little of the grammar from Spanish. The national bilingualism of Paraguay is considered unique. During the Jesuit missions (1609–1786) a rich literature developed in Guaraní, including particularly religious texts and even baroque operas. Today there is a wealth of songs and folkloric texts, but the guaraní plays a subordinate role as a literary language and in the media.