There are 5 high school codes in Papua New Guinea today, according to the ACT. The full list is shown below by city, with name of each high school and the city where the school is located (based on the ACT official site). You can search a school code by pressing “Ctrl” + “F” and then type school name or 6-digit school code. 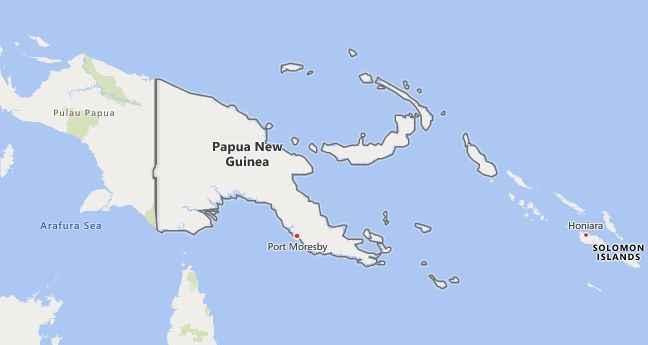 Papua New Guinea comprises the eastern part of the island of New Guinea, the Bismarck Archipelago, the Louisiana Archipelago, the D’Entrecasteaux Islands, the northern Solomon Islands Buka and Bougainville as well as numerous small islands and atolls.

Papua New Guinea is located in the inner tropics (approximately between 0 ° and 12 ° south latitude). There is a tropical climate with year-round precipitation, in the central mountain regions up to 6,000 mm annually, in the other parts of the country 2,000–3,000 mm precipitation.

About 63% of Papua New Guinea is covered in evergreen tropical rainforests. In the lowland areas there are swamp forests, grass swamps and savannas, on the coasts mangroves, in the highlands and in the southwest grasslands.

Papua New Guinea covers the eastern half of the island of New Guinea (85% of the territory is on it) and about 600 other Pacific islands of the Bismarck and northern Solomon Sea. The soaring Central Mountains, which cross the island of New Guinea from west to east, have extensive high valleys and several peaks up to 4,000 m above sea level (the highest mountain is Mount Wilhelm in the Bismarck Mountains at 4,509 m above sea level). In a south-easterly direction, the increasingly narrow land mass is essentially only formed by the central mountain range, that in the south by the Coral Sea, is bounded in the north by the Solomon Sea, and ends in a low mountain range in the southeastern tip of the island; it is continued in the D’Entrecasteaux islands and in the Louisiana archipelago. On both sides of the mountain ranges there are extensive, partly swampy subsidence areas; the north is bounded by a coastal mountain range (between 1 000 and 2 000 m above sea level, in the east up to 4 107 m above sea level), which is followed by a 1–3 km wide coastline. The area in the southwest is occupied by an alluvial plain (up to 450 km wide), which is closed off by an ingression coast.

The longest rivers, Sepik (1,126 km) and Fly River (around 1,100 km), have their source in the Central Mountains; the Sepik flows north to the Bismarck Sea, the Fly River to the Papua Golf, the Coral Sea.

The climate favors a very dense forest vegetation, which covered almost all of the territorial surface until a few decades ago: depending on the altitude, mountain prairie, coniferous forest and mountain equatorial forest alternate; mangrove forests dominate the coasts. The growing demand for tropical timber has caused a dramatic increase in deforestation and a reduction in the extension of wooded areas (limited to 65% of the national territory). The phenomenon of deforestation alongside the pollution caused by the mining industry seriously compromise the ecosystems present in Papua New Guinea, considered unique and particularly rich: the country hosts, in fact, the largest variety of orchids in the world; fauna includes carettochelidae, crocodiles, snakes, lizards, butterflies, fish, numerous birds such as parrots, birds of paradise, cockatoos, ostriches, hornbills, kingfishers, and some mammals, particularly kangaroos. The first rules relating to the safeguarding of the fauna heritage were issued in the 1960s, but the Department of the Environment and Conservation was created only in 1985 to defend and manage the various ecosystems present in the area. The seven national parks and other protected areas cover 4% of the country’s surface; to these must be added two sites that are part of the Ramsar program for wetlands of international interest: Lake Kutubu, which includes the lake itself (populated by 10 endemic species of fish among others), the marshes and the surrounding tropical forest; the Tonda Wildlife Management Area, 590,000 hectares of protected area located along the southern coast and managed by indigenous communities.