There are 3 high school codes in Mozambique today, according to the ACT. The full list is shown below by city, with name of each high school and the city where the school is located (based on the ACT official site). You can search a school code by pressing “Ctrl” + “F” and then type school name or 6-digit school code. 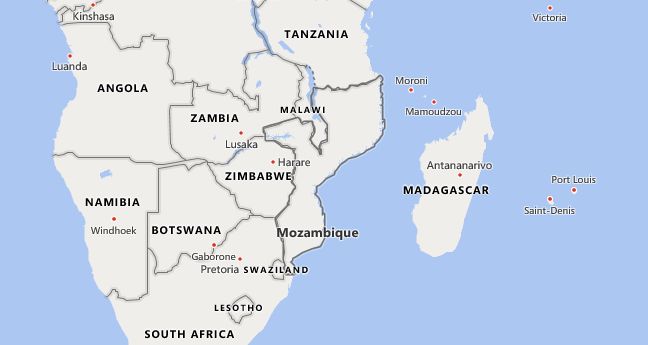 The above lists CEEB codes (College Entrance Examination Board) for all accredited Mozambique high schools. Please be informed that the list of high school codes in Mozambique may change throughout the year. If you can’t find codes for the high schools of your interest, please write to us or come back at a later time. We will update our database soon after a new high school code is added to the country of Mozambique.

Behind a 2800 km long coastal strip on the Indian Ocean extends an extensive lowland in the south. North of the Zambezi River lies an average 800 m high plateau, which is dominated by many island mountains. The majority of Mozambique is occupied by dry savannahs with individual groups of trees made up of umbrella acacias and baobabs. There are mangrove forests on the coast. The wildlife has suffered greatly from the civil war and natural disasters. National parks and nature reserves were set up to ensure their continued existence. Hippos, wild dogs, elephants, lions and buffalos live here.

There are two seasons in Mozambique. The humid and hot rainy season with temperatures around 30 ° C lasts from October to March. The dry season from April to September is a little cooler. However, the annual precipitation often fluctuates considerably. Therefore, drought years and on the other hand catastrophic floods occur again and again. In addition, Mozambique is hit relatively often by tropical cyclones.

Mozambique has 29.5 million residents (2018). The population consists predominantly of Bantu peoples who speak about 30 different languages. The official language is Portuguese. Most of the residents are Christians, some also Muslim. The main settlement areas are the coastal lowlands and the fertile river valleys. Only every third Mozambican lives in a city.

Mozambique has been hard hit by civil war, AIDS and natural disasters such as floods, droughts and tropical cyclones. Many people became refugees in times of need, both within the country and across the country’s borders. The HIV virus turned many children into AIDS orphans. Most of them live on their own as street children in the cities of Maputo or Beira and try to keep themselves afloat as rubbish collectors or shoe shiners. Around every fourth Mozambican is unemployed. As a result, many men leave their families and look to the neighboring Republic of South Africa a job. Most children do not have a birth certificate. They therefore enjoy no protection against abuse, child labor and forced marriage.

Mozambique is a presidential republic. The President is head of state, head of government and commander in chief of the armed forces. A parliament passes the laws. The people elect the President and Parliament. The FRELIMO party has had an uninterrupted majority in parliament and the president since Mozambique gained independence in 1975. Filipe Nyusi (* 1959 ) has been President since 2014. The power struggle with the opposition party RENAMO is often violent.

The constitution guarantees democratic structures such as the multi-party system and basic civil and human rights. Nevertheless, problems with corruption and organized crime determine everyday political life. Since 1995, Mozambique has been the only non-English-speaking country to be a member of the Commonwealth of Nations.

Schooling is compulsory for children from 6 to 13 years of age. Attending school is free. However, there is a great shortage of trained teachers. The size of the individual school classes usually comprises more than 70 children. Around half of the pupils leave school prematurely and do not have a school leaving certificate. The school system is divided into a seven-year elementary school, a two-year secondary level I and a two-year secondary level II. Only then can one attend a university.

There are big differences between the sexes. Since women and girls run the household and have to do a large part of the field work, they often lack the time to study. As a result, only 43% of adult women can read and write, compared to 71% of men.