There are 2 high school codes in Monaco today, according to the ACT. The full list is shown below by city, with name of each high school and the city where the school is located (based on the ACT official site). You can search a school code by pressing “Ctrl” + “F” and then type school name or 6-digit school code. 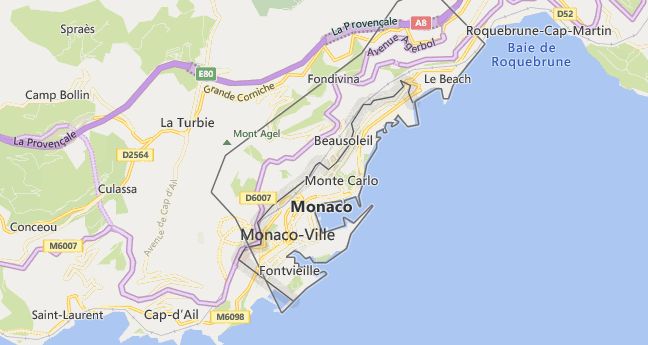 The above lists CEEB codes (College Entrance Examination Board) for all accredited Monaco high schools. Please be informed that the list of high school codes in Monaco may change throughout the year. If you can’t find codes for the high schools of your interest, please write to us or come back at a later time. We will update our database soon after a new high school code is added to the country of Monaco.

According to the constitution of December 17, 1962 (revised several times), Monaco is a constitutional hereditary monarchy. The head of state is the prince who has legislative and executive powers. He exercises the government together with the National Council (Conseil National, 24 members, elected for 5 years in a combination of majority and proportional representation). The executive power lies with the government council (Conseil de Gouvernement) under the chairmanship of a minister of state. Until the new basic treaty with France came into force (2006), it was appointed by the prince on the proposal of the French government. The Prince’s advisory bodies are the Privy Council (Conseil de la Couronne, 7 members appointed by the Prince and 4 by the Parliament for three years) and the Economic and Social Council (Conseil Économique et Social, 30 members appointed by the head of state from among the government, employers and employees). The Council of State (Conseil d’État, 12 members) is consulted on legislative initiatives. Active voting rights are available from 18 years of age, passive voting rights from 25 years of age.

In terms of foreign policy, the Franco-Monegasque basic treaty concluded in 2002 is linked to an expansion of Monaco’s sovereignty. Since 2006, the government council has had a member of the government with the functions of foreign minister. France remains the guarantee power in matters of external security.

The national flag was created by Prince Charles III. (1856–89) Introduced in 1881. The flag is divided horizontally in red over white.

Monaco uses the princely coat of arms of the House of Grimaldi as a national emblem. The shape that is valid today dates from 1858. A “French” shield, roughened in silver and red, rests on a crowned, red, Hermel-lined coat of arms. The chain and Grand Cross of the Order of St. Charles hang around him. Shield holders are two sword-wielding Friars Minorites who recall the legend of the conquest of the fortress of Monaco by the warrior Francesco Grimaldi (1297) disguised as monks. Under the image is a ribbon with the motto “Deo Juvante” (With God’s help).

November 19 is the name day of the late Prince Rainier III.

The groups Priorité Monaco (PRIMO), Horizon Monaco (HM) and Union Monégasques (UM) have been represented in parliament since the last elections in 2018.

Monaco maintains a barracked gendarmerie force of 112 men, plus around 500 private security staff. France is responsible for defending the country.

The law is formally independent of French law, but its content is strongly influenced by it. The five basic codifications are the Civil Code 1880–84, with multiple amendments later. The justice of the peace is responsible for minor civil and criminal matters, and also for labor disputes with expert assessors. The court of first instance is responsible for all other civil and commercial matters, as well as certain administrative and criminal matters, with the exception of crimes that come before its own criminal court (Tribunal Criminel). The Supreme Court (Tribunal Suprême) is a constitutional court and the administrative court of last instance.

There is a ten-year general schooling requirement from the age of 6. The educational system largely corresponds to the French system in terms of structure, content and types of qualifications (three-year École préscolaire, five-year École primaire, four-year college, three-year lycée). The language of instruction is French; Monegasque with history and culture as well as Catholic religion are compulsory subjects. English is taught from grade 1 at the École primaire. In Monte Carlo there is a music academy (founded in 1934) and the private International University of Monaco (IUM; founded 1986).