There are 2 high school codes in Mauritius today, according to the ACT. The full list is shown below by city, with name of each high school and the city where the school is located (based on the ACT official site). You can search a school code by pressing “Ctrl” + “F” and then type school name or 6-digit school code. 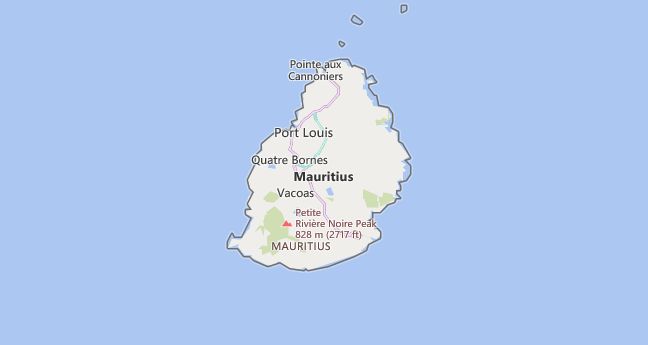 The above lists CEEB codes (College Entrance Examination Board) for all accredited Mauritius high schools. Please be informed that the list of high school codes in Mauritius may change throughout the year. If you can’t find codes for the high schools of your interest, please write to us or come back at a later time. We will update our database soon after a new high school code is added to the country of Mauritius.

The island of Mauritius is located 800 km east of Madagascar. It is of volcanic origin and consists of plateaus about 600 m above sea level, which slope gradually to the north and steeply to the coast to the south and west. The plateaus are dominated by three mountains with the Piton de la Rivière Noire (826 m above sea level) as the highest peak. The many small rivers have steep gradients. The steep rocky coast is very rugged and rich in natural harbors.

A melting pot of races and cultures, Mauritius has expressed some characteristics of its own through the creole folklore of the séga (dance inherited from Africa) and the creole dialect of slaves imported from Africa and Madagascar, which transmitted the legacy of an ancestral past through tales, legends and proverbs. Written literature, which appeared in the century. XIX, was at first a reflection of the French; but already the narrator Ch. Baissac (1831-1891) departed from a literature of imitation to draw inspiration from local folklore, followed by the poet Léoville L’Homme (1857-1928), singer of the Mauritian land, who with the drama The Last Tribute (1883) started the national theater. But no one better than the poet Robert Edward Hart (1891-1954) has been able to merge the contributions that came to him from the double Anglo-Saxon and French heritage, as well as Asian and African, in a work that is a spiritual ascent towards the lyrical knowledge of the world.. After the Second World War, the intellectual elite gathered around the authoritative critic Camille de Rauville (1910), founder, in 1964, of the Mauritian Academy, who sought a common denominator in the theory of Indo-oceanism. Indeed, Mauritian culture is extremely cosmopolitan; in addition to French, English and Oriental languages ​​ (Hindī, Hakka and Cantonese) are also literary languages, and Chinese and Indian influences are also felt on writers of European origin. Négritude, represented by Jean Erenne (1911-1986) and Édouard Maunick (b. 1931), one of the greatest modern poets, with clear and sonorous lines. But, whatever their origin, race or language, writers now feel first of all Mauritians and they deal with history, customs, problems of their land (like the narrators Marcelle Lagesse; André Masson (1921-1987); Jean Fanchette) or describe the beauties (such as the poets André Legallant, Magda Mamet, Pierre-Georges Télescourt, Kenneth Nathaniel). The national awareness has also created a politically engaged literature, whose exponents are, among others: Anand Mulloo (b. 1936) and Clifford Ng. Kwet Chan (b.1932). Even the literature in English, although less rich, is well represented with essays, novels, poems and plays. The most famous novel remains Namaste (1965) by Marcel Cabon. This book paved the way for a whole production of a peasant setting. The contributions of Marcelle Lagesse and the brothers Loys and André Masson were fundamental. In addition to the aforementioned André Legallant (Les tropiques du mal, 1982), Renée Asgaraly (Tant que soufflera le vent, 1984), Guy Silvio Bigaignon (La paille en queue, 1984) and Françoise Antelme (L ‘île aux somnambules, 1985). However, the two authors who seem closer to a true renewal of the genre are Gilbert Ahnee (Exils, 1989) and Ananda Devi (Rue de la poudrière, 1989; La fin des pierres et des âges, 1992). Poetry, more than the novel, has been able to elaborate original and characteristic forms. A thorough and basic study was done by A. Dev Chiniah: among the most important authors, Jean-Claude d’Avoine (1935-1986), Jean Fanchette (1932-1992), Raymond Chasle, Jean-Gérard Théodore (b.1943), Emmanuel Juste (b.1928), Edouard Maunick (b.1931) and JG Prosper (b.1933).